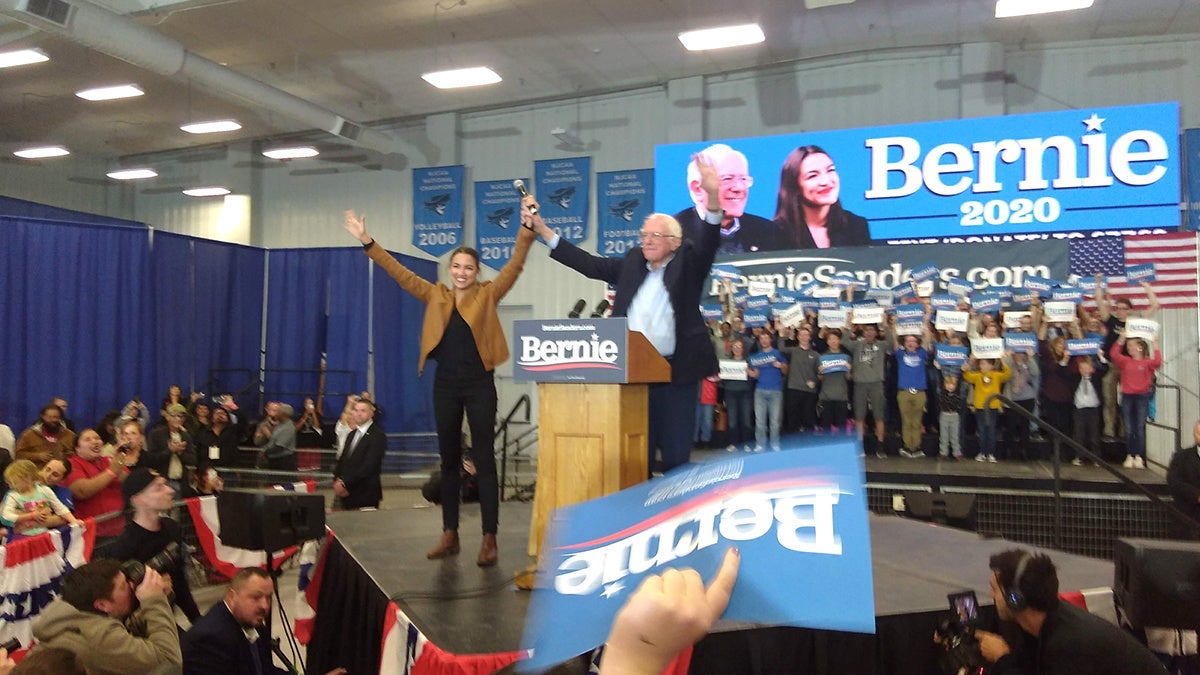 Sen. Bernie Sanders and Rep. Alexandria Ocasio-Cortez at a rally in Council Bluffs, Iowa on Nov. 8. Matt Johnson / CC BY 2.0

The campaign and its supporters applauded the evening as the latest evidence of Sanders’s momentum.

“Thousands of Iowans joined together tonight to say loud and clear that it’s time for a fundamental change in this country,” said Bernie 2020 Iowa state director Misty Rebik. “This is a grassroots movement built to transform this country. Together we’re going to expand the electorate and win the Iowa caucus.”

As they did last month at a rally in Queens, where Ocasio-Cortez officially endorsed the Vermont Independent senator, the two progressives centered the event on a call for solidarity with people of diverse races, class backgrounds and life experiences.

One key to “expanding the electorate,” Ocasio-Cortez suggested, is to inspire voters to vote to improve the lives of people they may never meet in person.

“Solidarity means, I fight for you and you fight for me,” the freshman congresswoman told the crowd before introducing Sanders.

“Iowa, you’re the first in the nation, baby,” she added. “You need to set the tone. I need to go back home to the Bronx and tell my community in the Bronx, ‘We need to fight for Iowa.'”

After news broke last month that Ocasio-Cortez, Rep. Ilhan Omar (D-Minn.), and Rep. Rashida Tlaib (D-Mich.) were expected to back Sanders, CNN host John King wondered aloud if the endorsements would come across as “too urban” and “too far-left” to appeal to Midwest voters — drawing accusations of racism as well as of misunderstanding Sanders’s broad appeal among young and working-class voters across the country.

Contrary to the predictions of the corporate media, Ocasio-Cortez won raucous applause in the key state as she rallied the crowd, and attendees shared positive feedback on the congresswoman with the press.

“I love her,” Hannah Cook of Glenwood, Iowa, told the Des Moines Register. “I was so excited when I saw that [she was going to be here].”

In addition to holding the largest rally in Iowa so far, Sanders and Ocasio-Cortez drew the largest crowd of any candidate in any state when they spoke to a crowd of 25,000 people in Queens.

In Council Bluffs Friday, Ocasio-Cortez spoke about the need to “stitch together” a coalition of people from all backgrounds and demographics who would benefit from having a president intent on passing Medicare for All, a Green New Deal, and other bold initiatives to drastically narrow the wealth gap in the U.S.

Watch the whole rally below: