I’m sitting on a ridge at 9,000 feet, overlooking the world’s largest alpine valley. The mid-June sun drops behind a nearby cliff band and the clouds shift, leaving errant rays of light shimmering in the passing agricultural vehicles’ dust trails. Behind me, a fence blocks access to a yawning hole—the entrance to the decades-defunct Orient iron mine—from which tens of thousands of bats should start emerging any minute now.

I love being in the humbling expanse of the San Luis Valley. Its conservation-focused ethos gives me hope at a time when optimism often feels foolish. Tucked into the western foothills of southern Colorado’s Sangre de Cristo Mountain range since 2001, the nonprofit Orient Land Trust has labored to preserve this valley’s pieces of human history, push for sustainable farming, and protect habitat for several species of animals, including the massive colony of bats that take over the abandoned Orient Mine each summer.

“What is that smell?” asked my husband Mike, approaching my perch from a patch of scrub oaks. I look around, shrug. Then, the ammonia hit my nostrils.

Scott, our guide for the night—and an amateur biologist and volunteer with the OLT—quickly pipes in, explaining that that the odor, which is reminiscent of a pit toilet and comes in waves over the next hour or so, is simply guano. In preparation for the night’s hunt, bats void their bladders and bowels before taking flight. Any minute now, Scott said they should start the flight out, so I lean back, watch the sky turn pink and wait, listening to chirps of swooping swallows, yips of distant coyotes, and the excited chatter of 23 human strangers, all here for the same show. 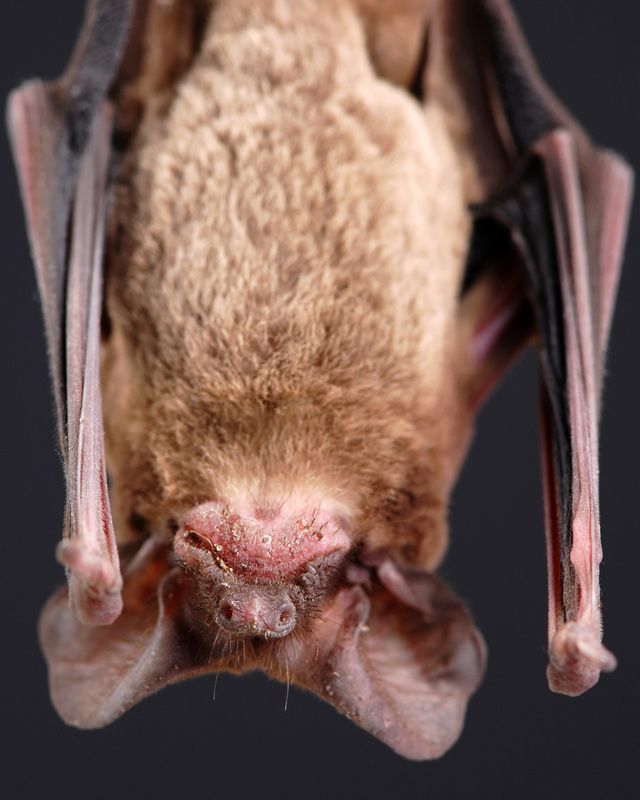 It starts suddenly: A stream of Brazilian free-tail bats (pictured, right, courtesy of iStock/the4js) splits the sky above my head. And as people’s voices fall away, the only sound left is the river of wings. Throughout the night, they’ll dine on moths, beetles, and other insects that inhabit the valley’s agricultural wetlands and nearby hot springs. The critters weigh roughly half an ounce and have wingspans averaging 13 inches. Since this particular roost is composed mostly of males who have temporarily separated from larger colonies of females, most of whom are busy lactating and rearing their newborn pups, it’s considered a bachelor colony. Females give birth in June, and since males don’t help raise their young, they typically split off during this period. The Orient Mine bachelors’ counterpart maternity colony summers further south, in New Mexico’s Carlsbad Caverns

In fact, The Orient Mine hosts not only the largest bachelor colony of Brazilian free-tail bats in North America (interestingly, bachelor colonies are typically much smaller, numbering in the hundreds or low thousands), but also the highest in terms of elevation. The migratory mammals have been spending summers here since at least the 1960s. They usually arrive from Mexico in mid-June and return south via Carlsbad Caverns by the end of September, but this year’s exceptionally dry, relatively warm winter brought them early, and in unofficial but unprecedentedly high numbers.

As soon as we left our camper in Moffat, Colorado’s Valley View Hot Springs and set out on the trail that climbs 700 feet to the Orient Mine, Mike and I began noticing plenty of evidence of the region’s chronic aridity and acute drought—the valley saw less than half its usual snowfall this winter, and the Rio Grande is running at 20 percent of its 120-year average. Early summer in the San Luis Valley is usually wildflower season, but the only visible blooms, pale yellow ones, unfurled from the prickly pear cacti at my ankles. As we hiked, the rain clouds we saw streaking black over the valley provided a guessing game: Were they scattered thunderstorms? Or (more likely) signs of virga, a form of precipitation that reaches toward but never quite touches the earth? 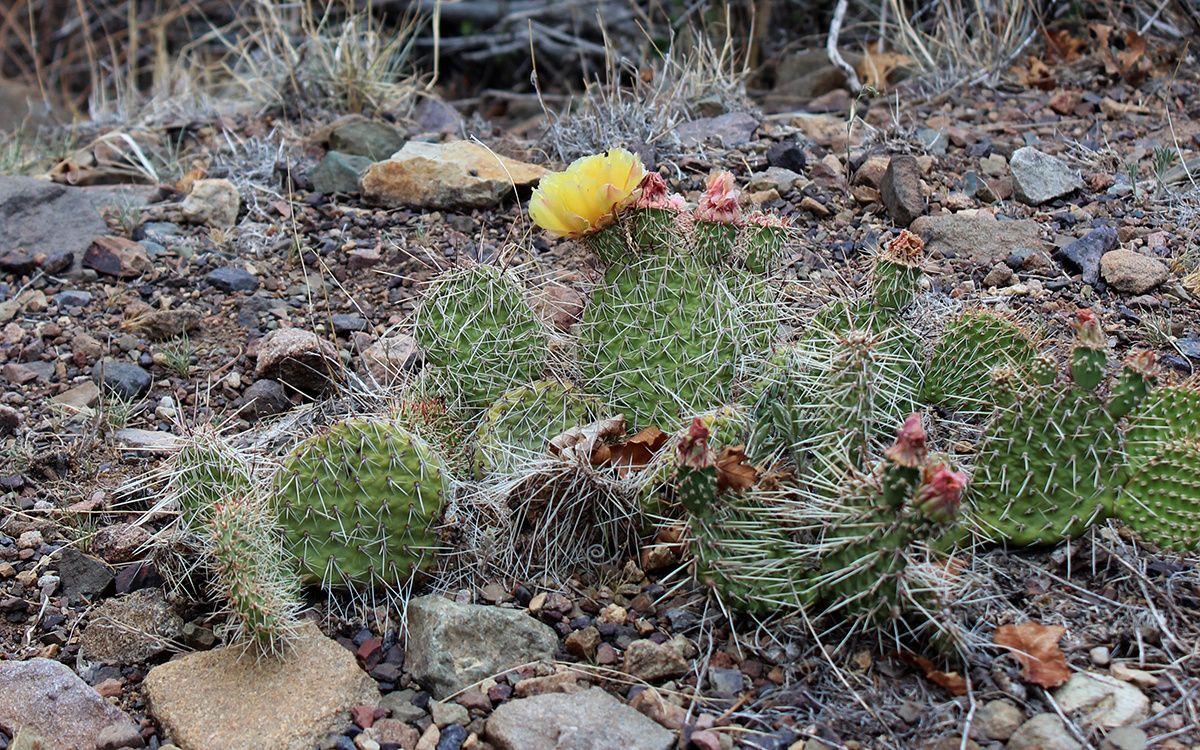 About a third of the way into the hour-long hike, the main trail veered right and massive piles of rust-colored tailings came into view. From 1880 until its closing in 1932, the Orient Mine produced two million tons of limonite and supported more than 400 people. Cutting through the piñon-juniper forest, smaller paths lead to old foundations and rusted barrels—the ruins of Orient Town.

The bats were first recorded in the Orient Mine about 35 years after extraction operations ceased. Ever since, they’ve been roosting throughout the small caverns that shoot off from the main cave, where temperatures stay consistently cool and the labyrinth provides shelter from potential predators. The bats’ nightly hunts, coupled with the valley’s dry climate and bitter winters, reduce the need here for agricultural pesticides.

According to OLT Executive Director Doug Bishop, the 2,200-acres it protects are home to common Colorado wildlife such as weasels, elk, and pronghorn, as well as two threatened species of fish—the Rio Grande Chub and the Rio Grande Sucker. Near the hot springs, the humidity and warm waters create a microclimate that supports a rare mountain orchid, a hot springs endemic snail, and one of Colorado’s few populations of fireflies. The organization encourages responsible stewardship of this fragile, high desert environment. Beyond teaching visitors about the bats at Orient Mine, they operate the cabins and campground at Valley View Hot Springs using hydroelectric power, and lead educational hikes and programs at Everson Ranch—a nearby historic homestead where the OLT runs sustainable agricultural and green energy projects. 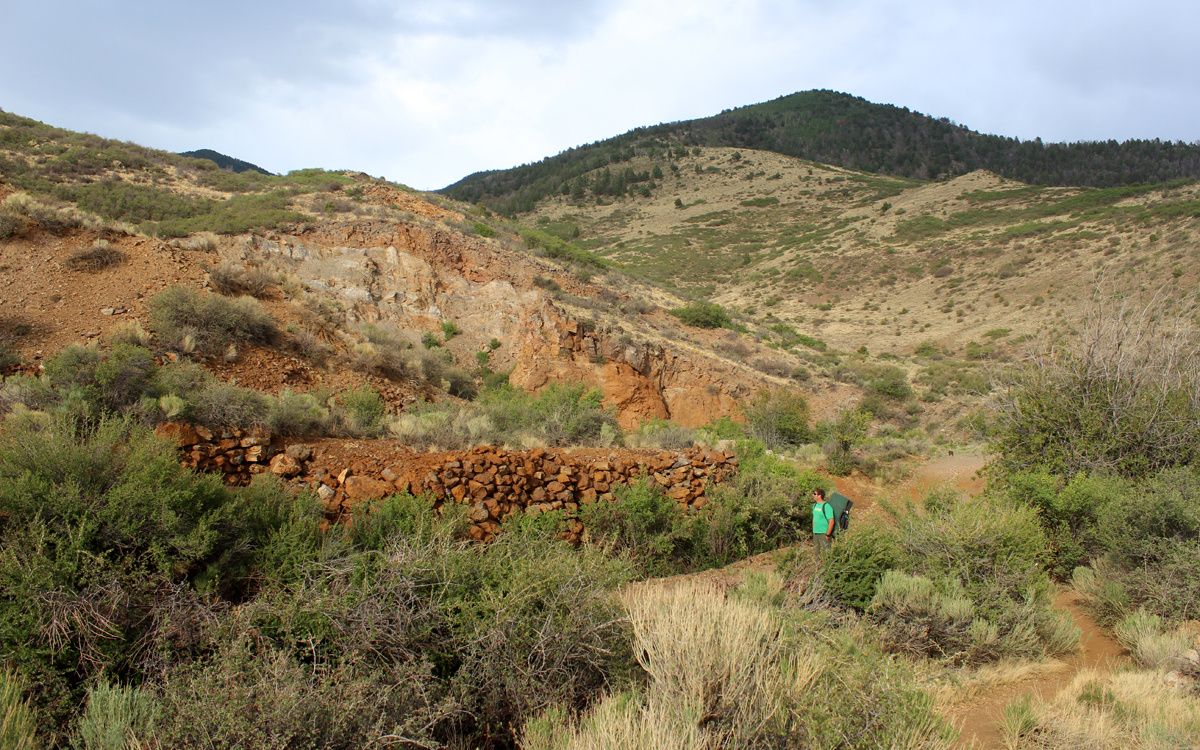 As the light fades, the bats become harder to see, but I still know when they pass. Their wings move through the air like a whip when they buzz my head. It’s difficult to know exactly how many leave the roost on a given night, but estimates put this colony between 100,000 and 250,000 individuals, depending on the month and year.

The bats flow from the cave for 45 minutes, almost twice as long as they will later on in the summer, as the season peters out. At first, they follow one another’s echo-location, forming a tight ribbon that zooms toward the valley floor. As their numbers thin from about 100 bats per second to 40, the stream widens and they begin moving independently. “[When there are fewer bats] it’s easier for them to hear the moths, so they can follow them instead of each other,” said Scott. “That’s why they seem more erratic.”

At 9:14 pm, as suddenly as the out flight began, it’s over. We pack up and don headlamps for the 1.5-mile hike back to the Valley View Hot Springs campground. Stars emerge, bright pinpricks in the inky moonless sky. After leaving our bags at the campsite, Mike and I wind through the woods to take a final soak in the hot springs, tracing steamy streams lit by fireflies that wink along their banks. As I sink into the warm water, constellations shimmer on its glassy surface, and I feel the air shudder as a bat wings past my ear.

Where: The Orient Land Trust in Moffat, Colorado

Getting There: It is roughly 200 miles (about a 3.5 hour drive) from Denver to the Orient Land Trust and Valley View Hot Springs Welcome Center. From there, the hike is approximately 1.5 to 2 miles, with a 700- to 800-foot elevation gain. I recommend the free guided hikes OLT offers nightly throughout the summer (weather permitting). Valley View Hot Springs is well equipped as a home base for the hike, with cabins as well as campsites for RVs, campers and tents, but it fills up early.

Fees: The hike is free. Overnights at Valley View range from $10 per night to $75 per night, plus a $30-per-person soaking fee.

What to Wear: OLT and Valley View are clothing-optional (this goes for the hike up to Orient Mine, too). However, Colorado weather can be mercurial, and temperatures drop quickly after dark, especially at 9,000 feet, so whether you choose to wear clothes or not, bring layers for rain and warmth, plenty of sunscreen, a hat, and a headlamp for the return hike.

Respecting the Wildlife: To avoid disturbing the bats during their out flight, don’t use flash for videos or photography, keep your movements calm and quiet, and speak in low voices, or not at all.

For More on Bats: Check out Sierra’s most recent slideshow featuring various bat species that were photographed by veteran biologist and photographer Merlin Tuttle.