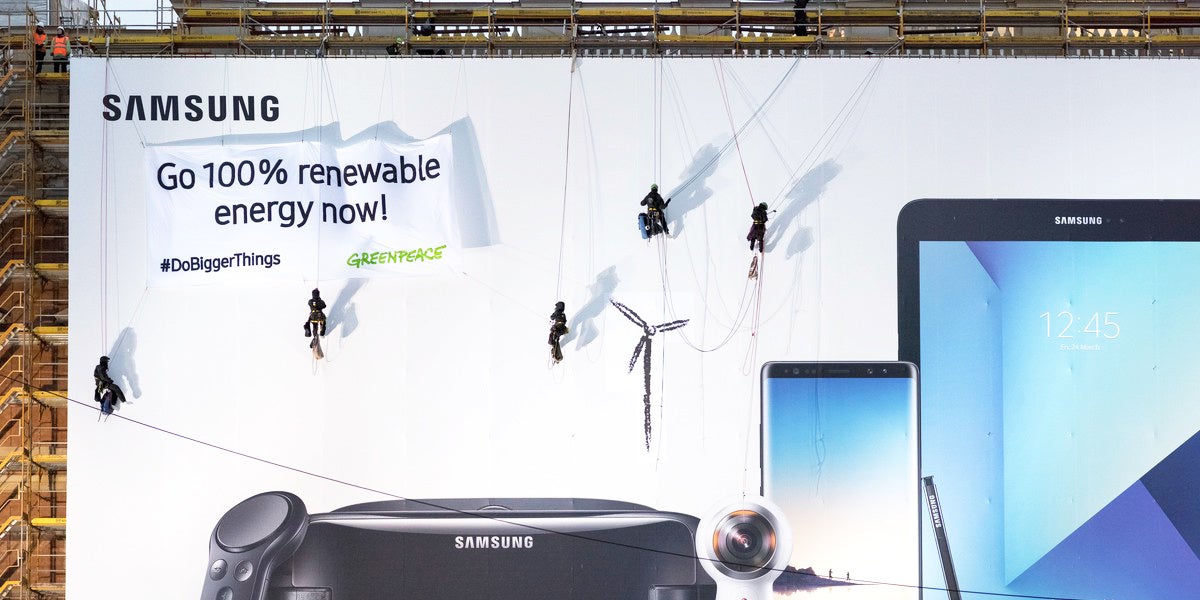 Greenpeace Germany activists hang a banner over a Samsung advertisement on the walls of the Berlin Palace that reads: Go 100% renewable energy now!. Mike Schmidt / Greenpeace

Last month at the Mobile World Congress in Barcelona, Samsung announced its new Galaxy S9 and Galaxy S9+, which only recently hit the market. But the event was unexpectedly quiet this year and the reason could be that, beside a few incremental features and larger cameras, new models aren’t really changing much.

Its phones might have the most cutting-edge technology, but the way Samsung manufactures its electronics is still stuck in the Industrial Age. For instance, Samsung uses about 16 terawatt a year, which is equivalent to that of the Dominican Republic, but only 1 percent of that is sourced from renewable energy. Instead of new models, what we really need is leadership tackling climate change across the sector, and a much more aggressive transition by corporations to renewable sources of energy that also extend into product supply chains.

Samsung has a unique status in the IT industry. The company has thousands of suppliers across the world, and provides key components to Apple, Oppo, Vivo, Xiaomi, Huawei and many others. If Samsung switches to 100 percent renewables, the impact will create a positive domino effect among other companies, facilitating an even faster transition to 100 percent renewable energy within the sector.

Despite the fact its carbon footprint is growing, Samsung has not yet set emissions reduction or a renewable energy targets for its supply chain, nor made public its top suppliers.

The company announced that it will release a renewable energy strategy by August 2018, but this is nowhere near enough given the scale and urgency of what we are facing. If it really wants to show its leadership, Samsung CEOs need to make climate change a priority and show the ambition to switch its operations to 100 percent renewable energy.

There are benefits for tech companies to switch to renewable energy. The increasing cost competitiveness of renewable energy, with long-term contracts increasingly at cost parity or even beating fossil fuels in many markets, also provides long-term price security. Furthermore, brands that can link their identity to a renewable supply of energy are better perceived by customers, given the growing concern on climate change.

Samsung’s home country of South Korea is also transitioning toward a clean energy system, offering the company an unprecedented opportunity to embrace renewables. Just recently, one of South Korea’s most coal-intensive provinces, Chungnam province, pledged to phase out coal by 2050 and the President has promoted a transition away from fossil fuels to renewables.

What is Samsung still waiting for?