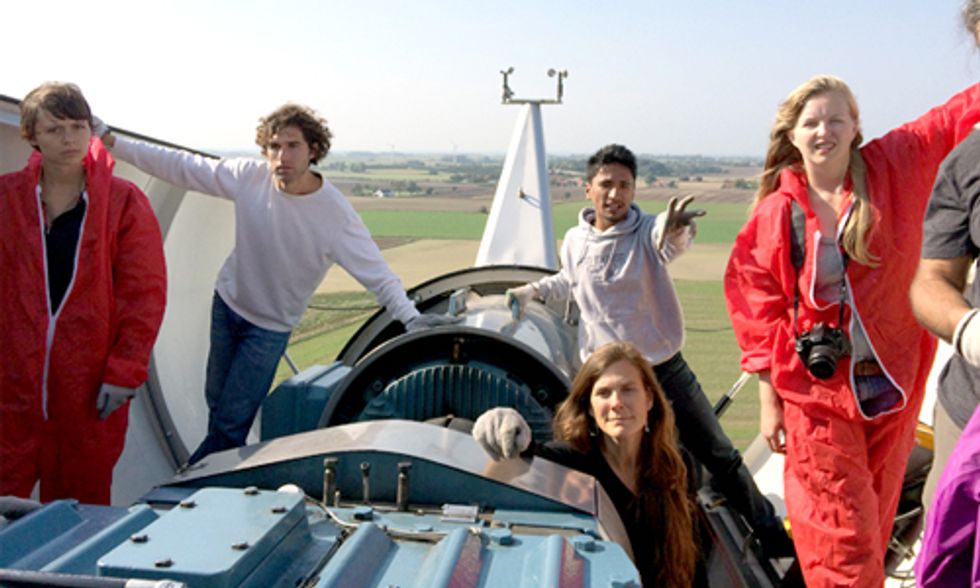 Wade Lyman, a College of the Atlantic human ecology major from Bar Harbor, spent his formative years developing a deep appreciation for the natural world—and a deep fear of the possibility of ecological collapse. “I hope that involving myself in this cooperative sustainability effort with the Samso course is a good way to rapidly develop and refine a skill set that can be applied to a career in sustainable development. I’m particularly interested in energy storage and smart grid technologies, as well as heating and cooling, especially in difficult climates."

[Editor's note: This fall, 13 students and two faculty members from College of the Atlantic visited Denmark's island of Samso, the world's first island to be 100 percent powered by renewable energy. Here's an article by one of the students that visited Samso.]

Considering Samso's reputation as the home of perhaps one of the most inspiring renewable energy projects in the world, it's very encouraging to leave it with a sense of normalcy.

Very early on in the course, I got the sense that apart from the initial costs of the energy projects there were no deviations from normal life associated with the switch to renewables. Their goal was simple: replace fossil sources of energy for electricity, heat and transportation with tried-and-true renewables; and that's precisely what they did.

While quite remarkable in many respects, Samso's energy project is most noteworthy in that it was achieved by un-extraordinary means.

A local electrician on Samso expressed the idea clearly: "We don't necessarily do anything different here on Samso, we just provide people with more information about existing energy solutions and actually use the available technology and subsidies."

I was surprised by the visual subtlety of Samso's sustainability measures.

There were no major innovations, no ground breaking technologies developed for the move toward decarbonization, even the scale of the projects seemed surprisingly unobtrusive. Instead, 11 land-based wind turbines—each harnessing enough power for 600 homes—provide comprehensive electricity for the entire island, and several district heating plants provide heat and hot water for most of the homes and businesses. The rest is covered by several municipal- and privately-owned solar installations, heat pumps and wood stoves.

The transportation sector, which comprises Samso's most energy intensive investments (including a ferry that runs constantly, year round), is more than offset by 10 offshore wind turbines.

When reading about Samso, the idea of 21 sky-scraping turbines seemed insufferably obtrusive and loud, but I changed my opinion when I actually experienced it. Although they were very conspicuous, it was clear that the amount of power they generated was well worth any negative visual impact they might have on the landscape. And as for their impact on the soundscape, I stood right beneath them in a roaring wind and found their noise subtle and rhythmic—easily ignored.

A local couple in the Samso community told me that most of the negative impacts of wind disappear when the people are allowed to invest in the projects themselves. They explained that they were among the community members investing in a turbine adjacent to their driveway.

When reading about Samso, the idea of 21 sky-scraping turbines seemed insufferably obtrusive and loud, but I changed my opinion when I actually experienced it. Photo credit: Wade Lyman / College of the Atlantic

Now that they associate the turbines with economic gain, it doesn't look at all like an eye sore, instead it "looks like a sculpture and sounds like music."

In my opinion, even without financial compensation, the turbines instill a sense of security. The knowledge of their tremendous power—providing energy for 600 Danish homes—is substantiated by their impressive aesthetic, which ultimately leaves me with hope for eventual freedom from fossil fuels. That alone makes them worth it.

Seeing such a dramatic switch to wind power makes me wonder how social resistance to the technology was overcome, given that many people in the U.S. seem unconditionally opposed to wind turbines.

The courageous leaders of the Samso Energy Academy, Soren Hermansen and Malena Lunden, described a long struggle and democratic discussion replete with social nuances and disagreements that eventually led to a project that most community members could agree on.

After spending three weeks on the island and having discussions with the local community, it is clear that wind was the dominant renewable resource available and that Samso may have been  particularly well suited both logistically and culturally for wind as opposed to solar as a main power source.

On Samso, the strong east winds seldom stop, and on several hilltops stand the archaic remains of long decommissioned windmills. Turbines are thus seen as a part of the cultural landscape—and the roots of this sentiment are deep and resilient.

In past centuries, the windmills of Samso were the axle of the community's wheel; the landscape was stippled with more than 100 turbines, which drove the grindstones that partly defined the local food system and economy.

It seems that the community of Samso may have been primed for wind projects, but how much of a role this cultural history played was unclear to me.