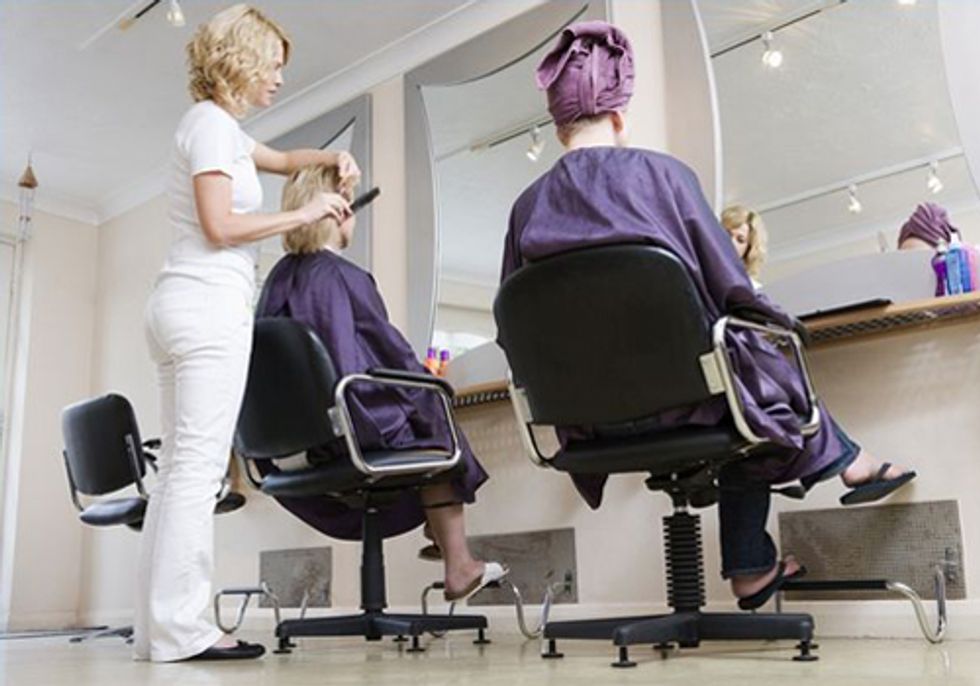 This week, dozens of salon workers and advocates from all over the country will be descending upon Washington, D.C. for a day of action to raise awareness about toxic chemical exposure in the workplace.

Workers will meet with lawmakers and share personal stories of the negative health impacts they have suffered as a result of working with salon products that contain toxic chemicals, including the still popular hair treatment Brazilian Blowout that was found last year to contain very high levels of the carcinogen formaldehyde.

The National Healthy Nail and Beauty Salon Alliance and the Campaign for Safe Cosmetics are organizing the day of action in an effort to garner support for the Safe Cosmetics Act of 2011 (H.R.2359), introduced last June and currently being debated.

The visits with lawmakers are part of a larger week of action that the alliance is organizing, including a meeting with Cabinet Secretary Chris Lu and top level officials from multiple federal agencies, where more than 40 letters from salon workers to the Food and Drug Administration (FDA) will be delivered. The letters are directed to Linda Katz, director of the FDA’s Office of Cosmetics and Colors, and will ask the agency to issue a voluntary recall of hair straightening treatments that contain formaldehyde. There will also be a conference about salon worker health and safety on July 26.

A growing body of scientific evidence indicates there is reason for concern regarding chemicals found in salon products. One recent study has shown that nail salon workers have higher levels of dibutyl phthalate (DBP), a reproductive and developmental toxicant, than the general population.1 Another study found that beauticians and hairdressers are likely to have significant exposure to solvents that are linked to birth defects.2 Other studies have found cosmetologists are at a higher risk for having spontaneous abortions and low birth weight babies.3,4

“We’re meeting with government officials this week because, despite thousands of women being poisoned in their own workplaces due to the dangerous chemicals in unsafe, unregulated products like the Brazilian Blowout and other nail and hair salon products, lawmakers and the FDA haven’t done much to address the issue in any significant way,” said alliance spokesperson Jamie Silberberger. “We hope that these meetings will educate lawmakers and encourage them to finally take actions to reduce these risks in salons.”

The Brazilian Blowout company settled with the California Attorney General last year, and it is now required to state on package labels that the product contains formaldehyde. However, the products remain on the shelves and a class action lawsuit by salon workers has been filed both in the U.S. and Canada. Although the products have been banned in Canada, France, Germany, Australia and Ireland, the U.S. continues to lag behind health protective standards.

“While the Attorney General’s ruling will help keep Brazilian Blowout honest about formaldehyde in their products, the fact is it doesn’t stop salon workers like myself from being exposed to high levels of the carcinogen. Without action from the FDA thousands of workers across the country will continue to experience adverse health effects, such as I have, as a result of being exposed to these treatments” said Jennifer Arce, a hairstylist in California.

In 2011 the FDA issued a warning to letter to Brazilian Blowout citing the company for labeling and safety violations. However, the agency has not moved to issue a voluntary recall of the product. The Cosmetic Ingredient Review Panel (CIR), established by the cosmetic industry to review the safety of cosmetic ingredients, determined in 2011 that the use of formaldehyde in hair straighteners is unsafe. However, the CIR is not a regulatory body and the panel’s recommendations are only voluntary.

“Workers are on the front lines in the fight for safer cosmetics and we hope that Congress will move to protect workers and all of us by overhauling our outdated and ineffective 70 year old cosmetics laws by passing the Safe Cosmetics Act of 2011,” said Lisa Archer, director of the Campaign for Safe Cosmetics at the Breast Cancer Fund.

The Safe Cosmetics Act of 2011 (H.R.2359) would give the FDA Office of Cosmetics and Colors authority to phase out ingredients in cosmetics linked to cancer, birth defects and developmental harm, provide a strong science-based safety standard that protects children, pregnant women, workers and other vulnerable populations, require full disclosure of ingredients and give the FDA the ability to recall dangerous products. Under current law, the FDA can’t require companies to conduct safety assessments, or even require recalls of cosmetic products, even when a product has been shown to be dangerous.

Visit EcoWatch's FOOD and BIODIVERSITY pages for more related news on these topics.