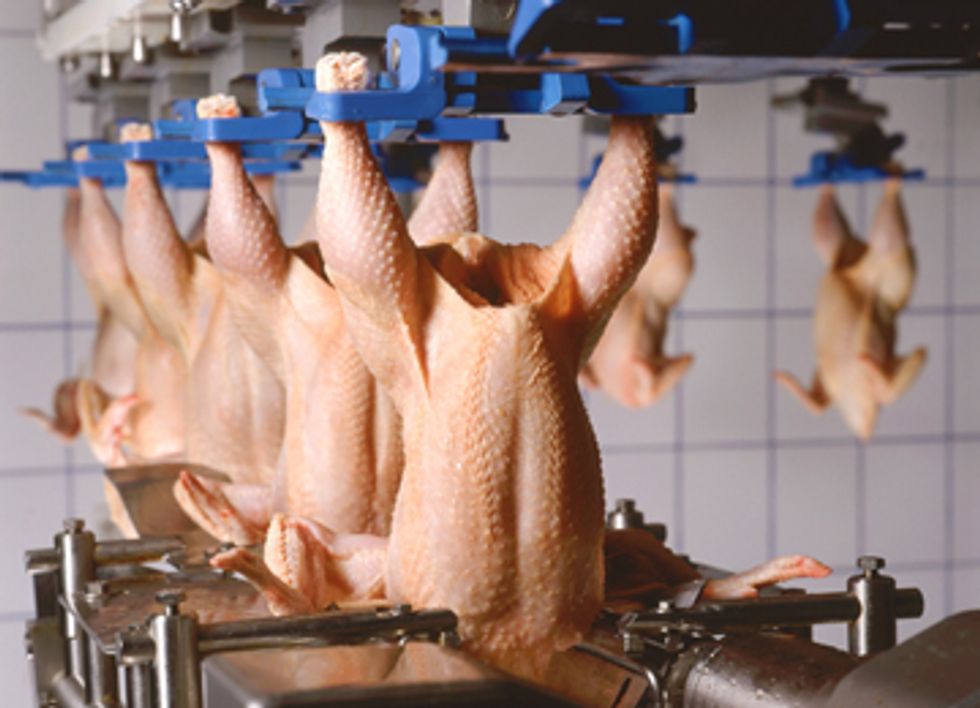 In the August 4 edition of the Washington Post, investigative reporter Kimberly Kindy unmasked a potential scam that has been going on at U.S. Department of Agriculture’s Food Safety and Inspection Service (FSIS) regarding its salmonella testing program for poultry products. In her article, various scientists raised questions about the protocol FSIS uses to evaluate the results of the tests it conducts.

In large chicken processing facilities, where the line speeds can run in excess of 175 birds per minute, chemical interventions are used to douse the birds as a way to clean off fecal and digestive content materials from the carcasses. These materials are frequently the reservoirs for food borne pathogens such as salmonella and campylobacter, and the chemicals are used to reduce the number of bacteria carried on the bird carcasses. FSIS conducts periodic government sampling and testing of chicken carcasses to evaluate how well the companies are doing in controlling the levels of salmonella and campylobacter.

As Ms. Kindy explained in her article, when FSIS collects its samples, an inspector will take birds off the slaughter line after they’ve gone through the chemical treatments, putting the birds in a plastic bag filled with a solution that collects any remaining pathogens that are on the carcasses. The birds are re-hung on the slaughter line where they are further processed and put into commerce. The plastic bags filled with the solution are sent off to an FSIS lab for analysis. Results are often reported within 24 hours of the lab receiving the sample.

For the testing to be accurate, the solution in those plastic bags must neutralize any remaining chemical interventions left on the bird carcass. What the Washington Post found in its investigation is that some companies are using new chemical compounds so powerful that they continue to work even in the solution FSIS uses to collect its samples, thus giving off false negative readings as to the levels of pathogens remaining on the birds.

While FSIS has been reporting in recent years that the levels of salmonella have been decreasing through its regulatory sampling in chicken plants (the agency just started to test for campylobacter in 2012), the Centers for Disease Control, the agency that monitors food borne illness outbreaks, has been reporting that numbers of consumers getting sick from salmonella remain stubbornly high. While there are other food vehicles often involved in these salmonella outbreaks, contaminated poultry remains a major source for these illnesses.

At Food & Water Watch, we have been suspicious of the FSIS testing program for a very long time. While FSIS claims that the government testing is unannounced, the companies always know when they are about to be sampled as the testing kit is mailed from FSIS to the chicken plant in a big box. That tips the company off that the inspector is about to take samples. FSIS inspectors have reported to us that companies will “shock the system” by increasing the levels of chemicals used in the slaughter process in order to pass the testing. The upper levels of management of FSIS also seem to suspect that some poultry companies are gaming the testing system as the agency has issued instructions to inspectors to request additional sampling of chicken plants that seem to be increasing the chemical interventions during the government sampling period and reduce the chemical treatments after the testing period is completed.

We are going to see more subterfuge if the Obama Administration presses forward with its proposal to reduce the number of government inspectors in poultry plants and let the companies police themselves by increasing line speeds and relying on chemical cocktails to scrub poultry of food borne pathogens. Food & Water Watch is encouraging the public to take action to stop this ill-conceived scheme from moving forward.