Salmon vs. Gold at Alaska's Pebble Mine 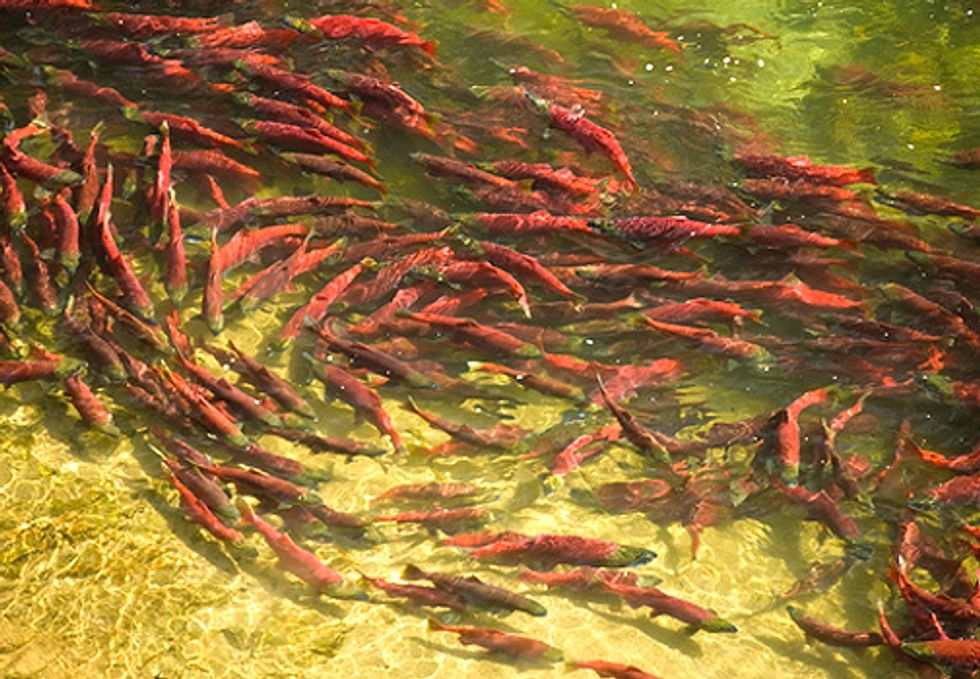 The board and shareholders of UK-based giant Anglo American are facing a growing barrage of opposition to its plans for a massive gold and copper mine in Alaska’s Bristol Bay. The mine would jeopardise the world’s largest and most valuable wild salmon fishery and a delegation of Alaska native Yupik leaders and the director of Bristol Bay’s largest commercial fishing fleet, are travelling 4,500 miles to attend the company’s AGM on April 19 to meet Anglo American CEO Cynthia Carroll and inform shareholders the mine is not worth the risk.

Investor confidence in the mine appears to be declining within Canada-based Northern Dynasty Minerals, Anglo’s partner in the Pebble Partnership, with its share price halving in the past year. And near the end of this month the Obama administration’s influential U.S. Environmental Protection Agency (EPA) will deliver a much-anticipated scientific report on the risks of large-scale mining to the Bristol Bay fishery. The EPA has the authority to block the mine if, as expected, the science shows the mine would have a significant adverse impact on the fishery.1 Kimberly Williams, executive director of Nunamta Aulukestai, an association of nine native village corporations representing over half of the region’s native population, says:

"We've come to London to let Anglo American's leadership and shareholders know that we will fight this threat to our salmon—and our way of life—to the very end.”

People power is also at work in Lake and Pen Borough, where the mine would be sited, with amendments to its ‘permitting code’ last autumn prohibiting development of large mines with a “significant adverse impact” on any salmon stream.

"This is the first time I can remember commercial fishermen from the entire country speaking so clearly in support of a regional fishery," said Sig Hansen, a Bering Sea crab fisherman in association with the letter. "It's clear that fishermen and consumers across the country value Bristol Bay salmon and will not let a mega-mine jeopardize it."

In 2009, CEO of Anglo American, Carroll, told the Harvard Business School Alumni Bulletin: “If I’m not satisfied we can proceed without harm to the local people and the environment, then we simply won’t do it. We will not go where communities are against us.”

Yet, despite 81 percent of Bristol Bay Natives voicing opposition to the mine, Anglo American and Northern Dynasty Minerals continue to push the project. The companies have filed a legal challenge against the Borough ordinance, and a recent article reports that the Pebble Partnership (Anglo American and Northern Dynasty) spent more than any other sector—even oil—on lobbying the Alaska Legislature. They have increased their mineral claim holdings to more than 500 square miles and to date the partnership has spent £258 ($450) million on exploration of the deposit. With gold prices over £1,000 ($1,600) an ounce, the company has announced that it will seek permits this fiscal year.

The threat to important national and international seafood supplies has also prompted America’s Food Marketing Institute (FMI), representing 26,000 food retail stores and $680 billion in annual U.S. revenue, to publicly support protecting the Bristol Bay fishery. In a letter supporting the EPA study, FMI cited the importance of the fishery to its member’s seafood supply chain. And nearly 30 investor organizations representing $160 billion in assets and 13 million Anglo American shares, and including the UK Local Authority Pension Fund, also sent a letter of support to the EPA.

In addition, the increasingly vocal opposition also includes more than 50 U.S. and U.K. jewellers, representing £3.5 billion in annual sales, who have signed a ‘No Pebble’ pledge not to buy gold sourced from the mine, including Tiffany & Co., Mappin & Webb, Fraser Hart, and Boucheron—uppliers of jewels to the Royal Family.

Other interest groups who have taken a stand against the mine include 200 chefs concerned about damage to sockeye salmon supplies, and more than 300 sport fishing and hunting businesses, including UK’s Hardy & Greys, Farlow’s of Pall Mall and Albury Game Angling.

Bob Waldrop, who will be at the AGM, added, “The Pebble project would jeopardize the fishery that supplies 50 percent of the world’s commercial supply of sockeye salmon.”  “We are confident the EPA study will confirm that the disposal of mine waste into this top salmon habitat is environmentally unacceptable,” he said.

The proposed mine would be the largest in North America and generate up to ten billion tons of toxic mine waste, which will be disposed of behind massive earthen dams that will rival the world’s tallest concrete dam—the Three Gorges dam in China. If it goes ahead, the mine would destroy important salmon spawning habitat, and put the salmon fishery at high risk, according to a 2010 ecological risk assessment.

1America’s EPA was requested by local Alaskans and fishermen to study the suitability of large-scale mining and development in Bristol Bay, including the Pebble Mine. Under section 404c of the Clean Water Act, the EPA can proactively prohibit the disposal of mine waste into Bristol Bay streams, lakes or wetlands.