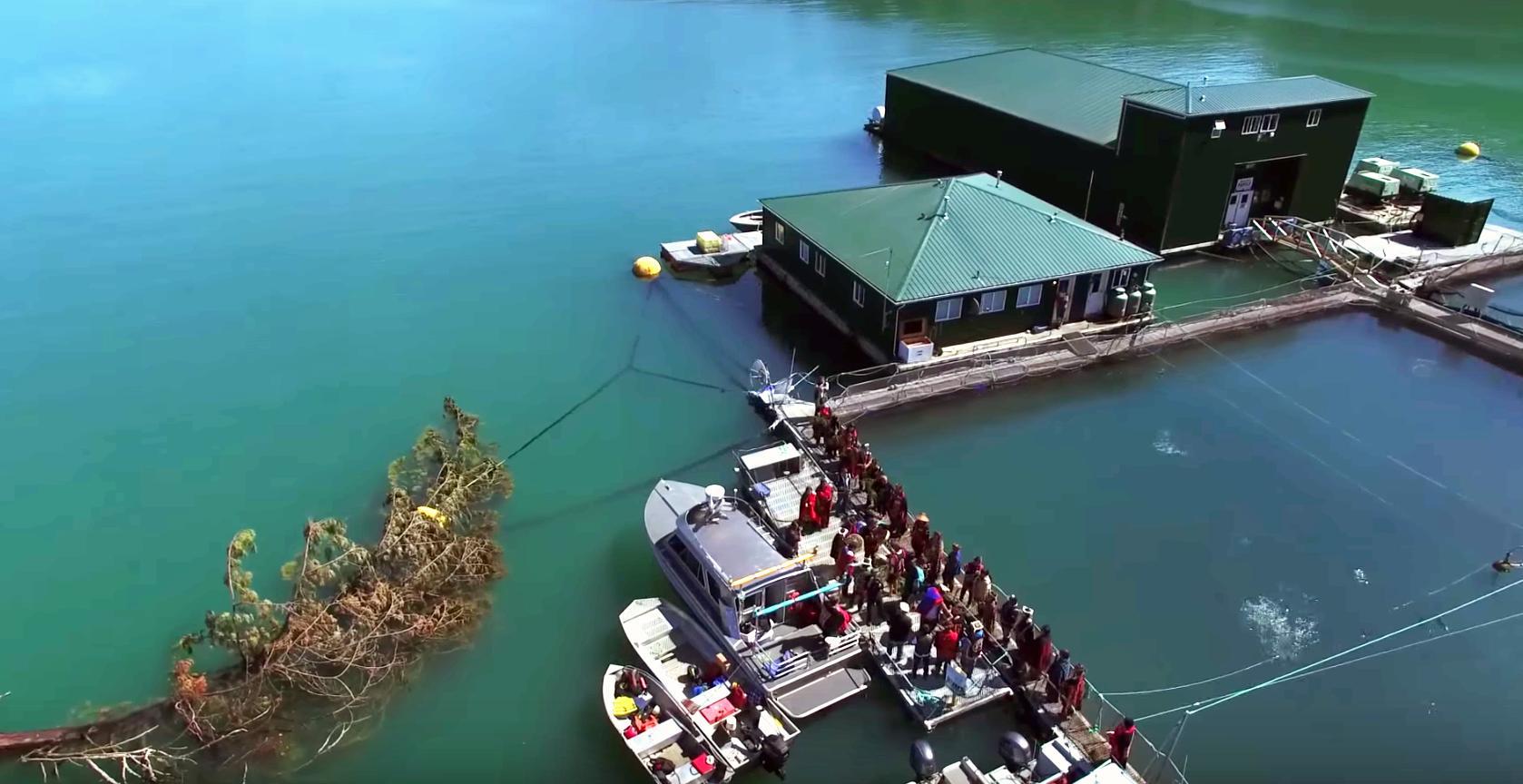 Members of the Musgamagw Dzawada’enuxw First Nation say salmon farms in their territory are destroying wild salmon runs and polluting clam beds and they must leave.

Last week a small flotilla of boats from Kingcome Village, Gilford Village and Alert Bay, with the Sea Shepherd Conservation Society‘s research vessel Martin Sheen in the background, handed eviction notices to four Cermaq Canada salmon farms. Hereditary chiefs said notices will be issued to all 27 farms in their territory. 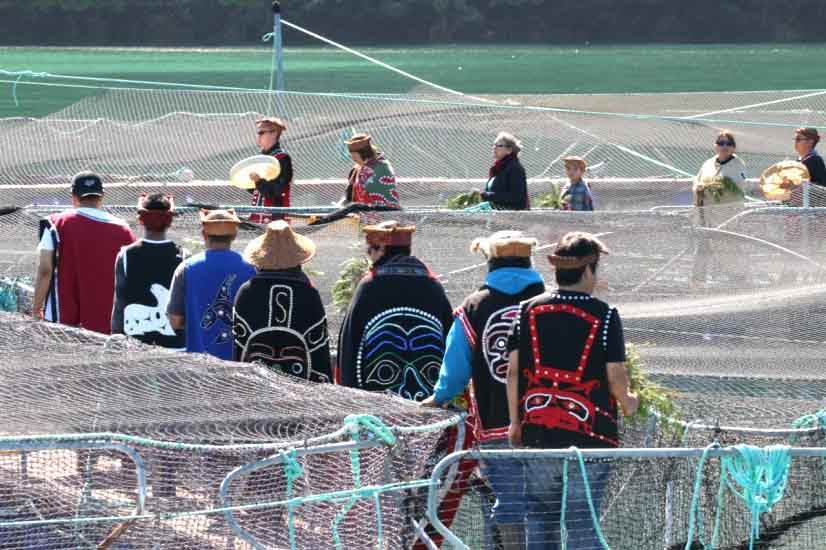 Hereditary chiefs and supporters from the Musgamagw Dzawada’enuxw First Nation hold a cleansing ceremony at a Cermaq Canada salmon farm off northern Vancouver Island. The First Nation has issued eviction notices to four farms and say they plan to try to evict all 27 farms in their territory.

With chiefs in traditional robes, drumming and singing, the group ignored efforts by Cermaq employees to prevent them from landing, handed over the notice and then held a cleansing ceremony and wild salmon barbecue at one of the farms.

“Our people have spoken. We want salmon farms out of our territory,” said Chief Councillor Willie Moon, the first to pull into the farm off northern Vancouver Island.

Musgamagw Dzawada’enuxw consists of five nations, with 576 members, whose territory encompasses the Broughton Archipelago east of Alert Bay. Cermaq and Marine Harvest have farms in the area.

“I just told them they were trespassing and we had every right to be there. This land belongs to our people,” Moon said in an interview.

“All that shit going into the water. I don’t believe it is being flushed out and the beaches are becoming muck. It’s our whole food chain. We want them totally out of our territory and I just hope someone is listening,” she said.

Musgamagw Dzawada’enux leaders, who say they have the support of many other coastal bands, are demanding that no more farm fish be transferred into their territory, all farm salmon should be removed within three months, that First Nations have access to the fish so they can assess what diseases exist and the right to have an observer present during harvest.

Two previous attempts to evict the farms have failed and, this time, the First Nation is sending a letter to Prime Minister Justin Trudeau asking him to live up to his promise to honor the rights of First Nations as a “sacred obligation.”

“We, the Musgamagw Dzawada’enuxw view the destruction of wild fish by the fish farming industry as part of the long history of genocide forced on our people by the governments of Canada. Salmon are essential to our well-being and the well-being of our world.”

People are now ready to fight for their traditional way of life, Willie said.

“One of our youth said ‘are we prepared to die for this?’ I think we are now,” she said.

“The fight is on … This is just the beginning.” 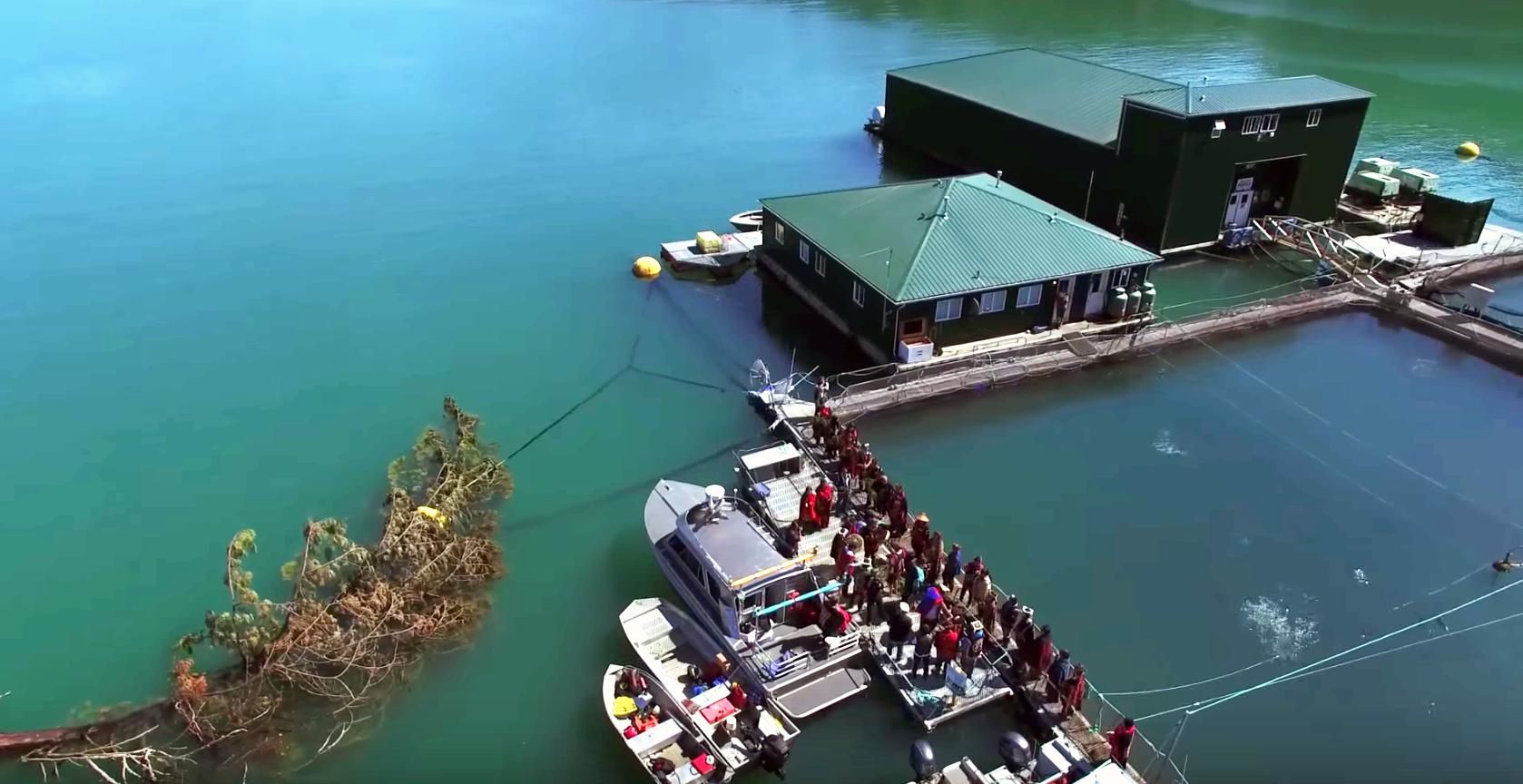 There has been no support from the Department of Fisheries and Oceans who, in 2015, allowed the number of salmon at several farms in their territory to almost triple, even though each tribe had rejected the applications, the leaders said.

After the first eviction notice was issued on Thursday, the leaders received a letter from Cermaq offering to meet them.

“But all they want to talk about are their operations and we are just talking about getting them out. That’s the bottom line, so I don’t think there’s much point,” Willie said.

Jeremy Dunn, BC Salmon Farmers Association executive director, said salmon farms in the area have a two-decade history of positive working relationships with First Nations and farmers have 20 social and economic agreements with BC bands.

Those agreements cover 78 percent of the salmon raised in BC, he said.

“Thirty years ago there were no First Nations agreements and salmon farmers were one of the first to put together agreements to respect their territories and to share in the benefits of the activity,” Dunn said.

Cermaq is open to meeting with the First Nation to discuss the issue, but having the group landing on the farms has been disconcerting for staff, Dunn said.

“Imagine if 30 people came to your workplace when there are four or five of you in the middle of the ocean. It is challenging,” he said.

The eviction notices appear to be part of a campaign being orchestrated by Sea Shepherd, Dunn said.

Morton is taking samples to investigate which diseases could be spreading from farmed fish to wild salmon.

Cermaq also suspects Sea Shepherd is behind the eviction notices.

“Over the past few weeks, our employees have been harassed by the Sea Shepherd Society and other activists,” says a statement on the Cermaq website.

But Musgamagw Dzawada’enuxw members say their only aim is to cleanse their waters for their children, future generations and ancestors.