Salmon Face Upstream Battle as Blueprints for Recovery Are Ignored 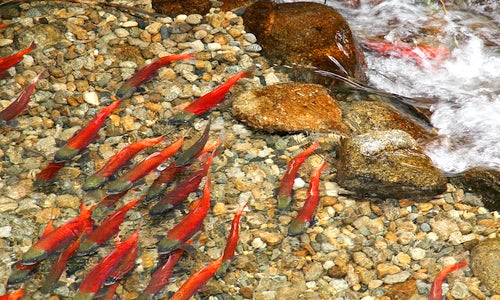 As the days get cooler and shorter, millions of salmon are making the arduous journey up the rivers and streams of British Columbia (B.C.) to the spawning grounds where they were born. Waiting for this rich pulse of life from the Pacific Ocean are bears, gulls, wolves, eagles, ospreys, crows, pine martins and dozens of other species. Communities and businesses wait, too. It’s fitting that this time of year also marks the first anniversary of the final report of the Cohen Commission of Inquiry into the Decline of Sockeye Salmon in the Fraser River. 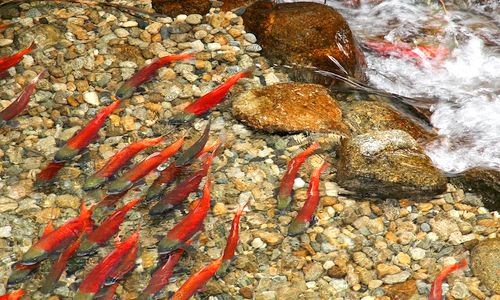 The record decline in sockeye returning to the Fraser River in 2009 provided the initial push for a federal judicial inquiry. Now, four years later, the offspring of those salmon are returning to spawning grounds in dismally low numbers—so low that sockeye salmon fishery closures are widespread.

The record decline in sockeye returning to the Fraser River in 2009 provided the initial push for a federal judicial inquiry. Now, four years later, the offspring of those salmon are returning to spawning grounds in dismally low numbers—so low that sockeye salmon fishery closures are widespread.

What happened to Justice Bruce Cohen’s 75 carefully crafted recommendations to rebuild Pacific salmon? What will happen to the industry and communities that depend on them?

The Cohen Commission took three years, 2,145 exhibits, 892 public submissions and 138 days of hearings with 180 witnesses to create its report. The David Suzuki Foundation worked with lawyers at Ecojustice to provide research and testimony to help ensure the inquiry looked into problems within the current management system. With optimism that the federal government was taking the decline of wild salmon seriously, this independent and thorough review created a blueprint for action. What had become a contentious and polarizing issue had a direction forward.

That clear direction, however, has been followed with near silence and little effort from the government. Although politicians say they’re reviewing the report and taking actions “consistent with the recommendations,” the few steps they have taken, such as providing grants for research projects, miss the mark and don’t address the significant issues and opportunities raised by Justice Cohen.

The government’s own Wild Salmon Policy, released in 2005, provides a strong template for salmon conservation and formed a key plank of Cohen’s recommendations. It’s time to bring this policy to life with a cost-itemized plan for determining tasks, delegated responsibility for carrying them out and defined timelines. The government hasn’t even appointed a champion to navigate the complex social, economic, ecological and political world of wild Pacific salmon. 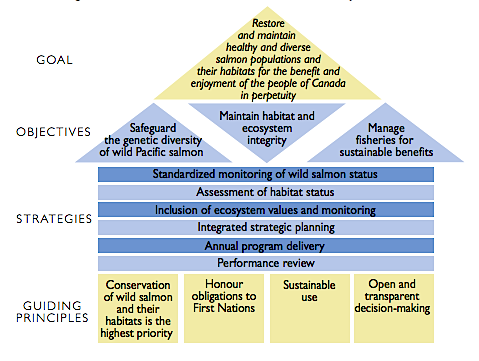 The commission concluded that climate change is one of most troubling stressors for the fish. Salmon are sensitive to water temperature changes and Fraser River waters are projected to warm. Canada must do its part to address climate change if fisheries management is to have any influence on the future of these amazing creatures and all those that depend on them.

Impacts from open net-pen salmon farming also came under the inquiry’s scrutiny. The Department of Fisheries and Oceans (DFO) continues to both promote and regulate the salmon farming industry. Justice Cohen recommended the DFO separate these conflicting mandates and end its responsibility to promote farmed salmon. The DFO should return to what it did well: gathering relevant scientific data, applying it and making it available to the public.

Justice Cohen called for a freeze on fish farm expansion in the Discovery Islands, along an important salmon migratory route, and removal of farms if impacts aren’t addressed by 2020. The commission interviewed British Columbians and received a clear message: don’t risk the future of wild salmon and their important contribution to the fabric of First Nations culture, coastal communities and the whole of Canadian life.

A year has passed, the testimony is in, the evidence heard and $26 million spent. It’s time for action to rebuild wild Pacific salmon runs, so this iconic fish can be shared and enjoyed for generations to come. The fate of wild salmon is too important to be left to languish in government offices. We can’t go on setting up inquiries to review problems and then ignore their recommendations.

This is a serious report with a clear blueprint to address problems. It deserves a serious response. As the salmon struggle to make their miraculous journey up B.C.’s wild rivers, we have to tell Prime Minster Stephen Harper and Fisheries Minister Gail Shea it’s time for the government to get moving too.