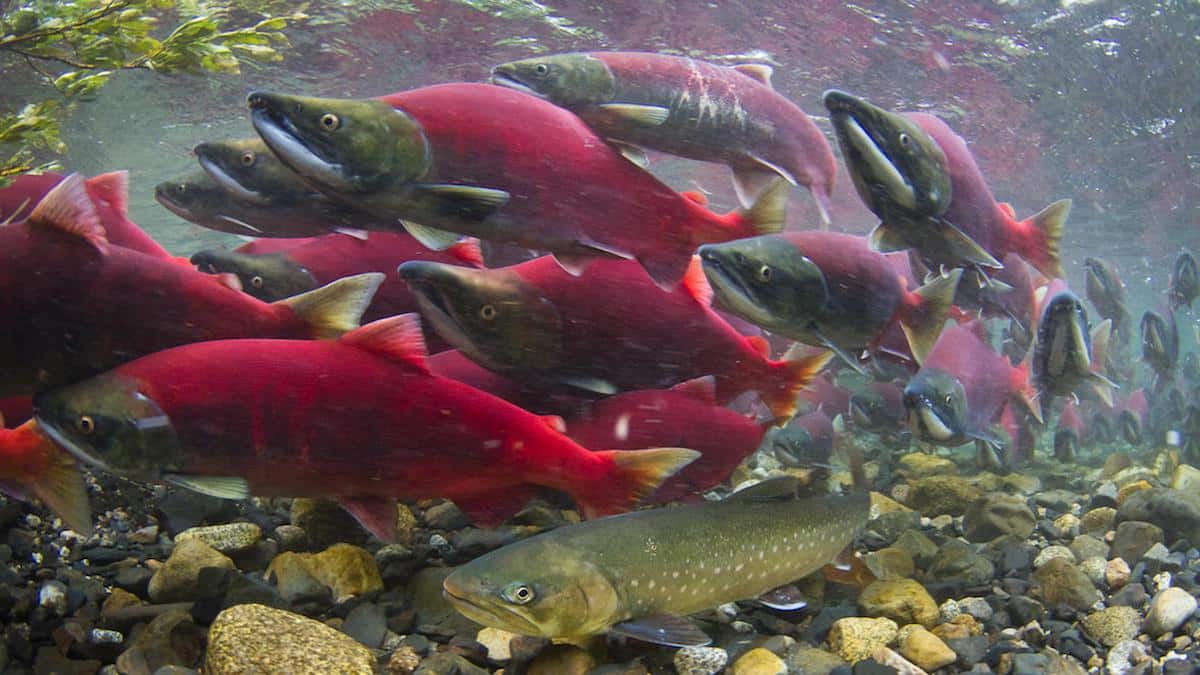 Sockeye salmon on their way to spawn. Jonny Armstrong

A video released by a conservation group shows in disturbing detail how heat waves fueled by the climate crisis are harming the endangered salmon of the Pacific Northwest.

The video, released by Columbia Riverkeeper on Tuesday, shows salmon suffering lesions and fungal infections when water temperatures in the Columbia River Gorge topped 70 degrees Fahrenheit, The Guardian reported. The river is legally never supposed to get hotter than 68 degrees.

“The sockeye salmon in the Columbia River are dying,” video narrator Don Sampson, who is a member of the Confederated Tribes of the Umatilla Indian Reservation and an advisory board member for the Northwest Tribal Salmon Alliance, said. “As you can see, they’re in lethally hot water. We’re in a salmon crisis.”

The salmon in the video were on their way back to their natal spawning grounds after spending around two years in the ocean. However, Columbia Riverkeeper executive director Brett VandenHeuvel told The Guardian that they were destined never to make it home. Instead, when the video was taken July 16 they had veered off course to the Little White Salmon River — a Columbia tributary — to escape the high heat. There, they will not be able to spawn and are likely to die of heat stress and disease.

It isn’t yet known how many salmon in the river might be impacted by the summer’s heat, but VandenHeuvel said he had observed similar scenes of suffering in other tributaries. Snake River sockeye are endangered, so even a few deaths can have a big impact.

“It’s heartbreaking to watch animals dying unnaturally,” he told The Guardian. “And worse, thinking about the cause of it. This is a human caused problem, and it really makes me think about the future.”

Heat waves are becoming more frequent because of the climate crisis. The U.S. has suffered five distinct heat waves so far this summer, with most of them concentrated on the West Coast. One of them, which baked the Pacific Northwest at the end of June, was found to have been “virtually impossible” without human-generated climate change, according to World Weather Attribution.

The Columbia River salmon are far from the first casualties of the successive West Coast heat waves, which have killed hundreds of people in the Pacific Northwest and Canada and more than a billion marine mammals, The Guardian pointed out. In California, meanwhile, officials predicted that high temperatures would kill almost all of the juvenile Chinook salmon in the Sacramento River.

In the case of the Sacramento River, the climate crisis is interacting with river management decisions to harm the salmon. The river is damned, and diversions from the reservoir to agriculture keep water levels lower and, therefore, temperatures warmer.

A similar constellation of factors is to blame for the Columbia River salmons’ condition. There, the situation is worsened by the Lower Snake River Dams.

Columbia Riverkeeper is urging people distressed by the video to sign a petition calling on Washington and Oregon’s Senators to breach the dams.

“We need people to wake up to see what it is,” Sampson concluded at the end of the video. “How important [salmon] are to not only just Indigenous people, but all people on this Earth.”