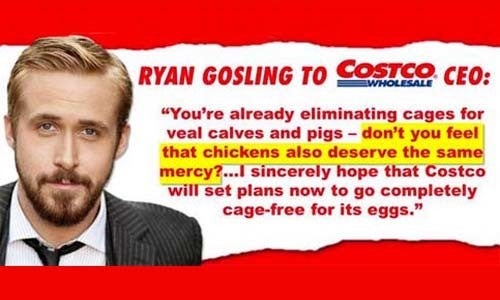 Costco has been under intense criticism this week because it has yet to pledge not to sell GMO-free salmon should the U.S. Food and Drug Administration approve it. Also, the Humane Society of the United States recently uncovered that a Costco egg supplier uses abhorrent factory farming conditions to raise its egg-laying hens despite the fact that Costco made a public commitment eight years ago to eliminate cage confinement of chickens from its supply chain.

The undercover investigation revealed “a Costco egg supplier cramming chickens into tiny cages, forcing birds to live in cages with the decayed, mummified corpses of their dead cage-mates, and engaging in other inhumane practices that are bad for animals and food safety,” according to the Humane Society. The company is marketing their eggs in a highly misleading way, says the Humane Society, because the conditions they found at Costco’s egg supplier are “in stark contrast to the happy hens and green fields depicted on egg cartons sold at Costco.”

Earlier this week, the campaign got some high profile support from heartthrob actor Ryan Gosling. In an open letter, Gosling wrote:

Video footage revealed abhorrent cruelty including rows upon rows of birds confined in filth-laden cages with the mummified corpses of their cage-mates—eating, sleeping, defecating and laying eggs on top of dead birds—and hens’ wings, legs and necks trapped in the corroded wires of their battery cages.

Gosling called it “appalling” that Costco would market their eggs “with deceptive labeling on cartons featuring graphics of birds living out in a green pasture.”

Check out the undercover investigation here: