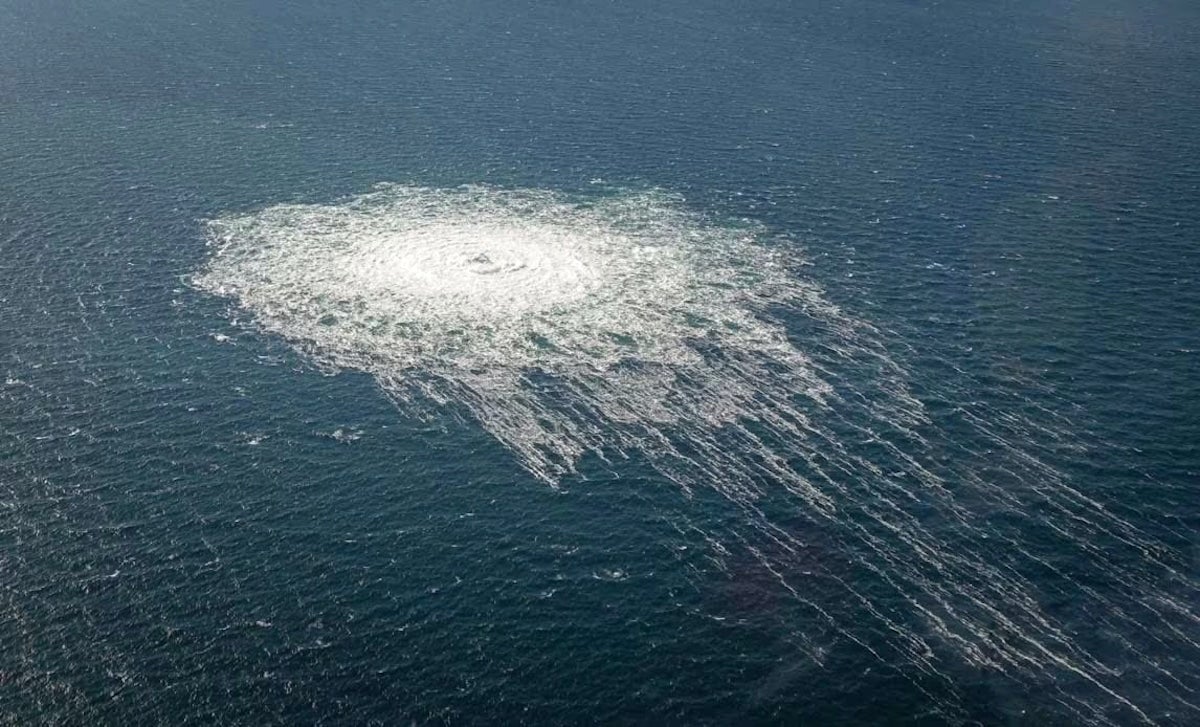 Gas leaking into the Baltic Sea from the Nord Stream 2 offshore pipeline, seen from a Danish F-16 interceptor on Bornholm, Denmark on Sept. 27, 2022. Danish Defence / Anadolu Agency via Getty Images

Three separate leaks on Russia’s controversial Nord Stream 1 and 2 gas pipelines — which run from Russia to Germany beneath the Baltic Sea — have led to speculations of sabotage. The gas transport pipelines lie at the center of the energy deadlock between Europe and Russia.

A shipping exclusion zone has been established around Bornholm, and flights below about 3,200 feet have been prohibited.

“Breakage of gas pipelines is extremely rare,” said Danish authorities, as The Guardian reported. “Therefore we see reason to raise the preparedness level as a result of the incidents we have seen over the past 24 hours.”

Though neither of the pipelines had been active, they were full of natural gas when a sharp drop in pressure was detected in first Nord Stream 1, then in the second pipeline.

Speaking at the launch of another undersea pipeline running between Poland and Norway through Denmark, Poland’s Prime Minister Mateusz Morawiecki blamed the leaks on Russia, reported The New York Times.

“We do not know the details of what happened yet, but we can clearly see that it is an act of sabotage,” said Morawiecki, as The New York Times reported. “An act that probably marks the next stage in the escalation of this situation in Ukraine.”

Prime Minister of Denmark Mette Frederiksen said it was hard to imagine that three individual leaks happening almost at once was an accident, reported The Guardian.

On Twitter, one of Ukraine President Volodymyr Zelensky’s senior advisers said the leaks were “a terrorist attack planned by Russia and an act of aggression towards EU.”

The leaks were sizable, and Director General of the Danish Energy Agency Kristoffer Bottzauw said it could take as long as a week for gas to stop seeping out of Nord Stream 2, reported Reuters.

“The sea surface is full of methane, which means there is an increased risk of explosions in the area,” said Bottzauw, as Reuters reported.

When asked by reporters if the damage to the pipelines had been the result of sabotage, spokesperson for the Kremlin Dmitry Peskov said no possibility could be eliminated at the moment, reported The Guardian.

According to environmental NGOs, it is likely that the pipeline leaks will cause major harm to the environment.

“As soon as methane in gas form raises from the surface of the sea into the atmosphere, it will massively contribute to the greenhouse effect,” said Sascha Müller-Kraenner of Environmental Action Germany, as The Guardian reported.

Europe’s Largest Battery Storage System Goes Live in UK
As the UK braces for the first full winter since
By Olivia Rosane
China, World’s Leading Methane Polluter, Drafts Plan to Cut Emissions
During a surprise appearance at the COP27 UN climate conference
By Olivia Rosane
Why Fixing Methane Leaks From the Oil and Gas Industry Can Be a Climate Game Changer That Pays for Itself
By Jim Krane
By The Conversation