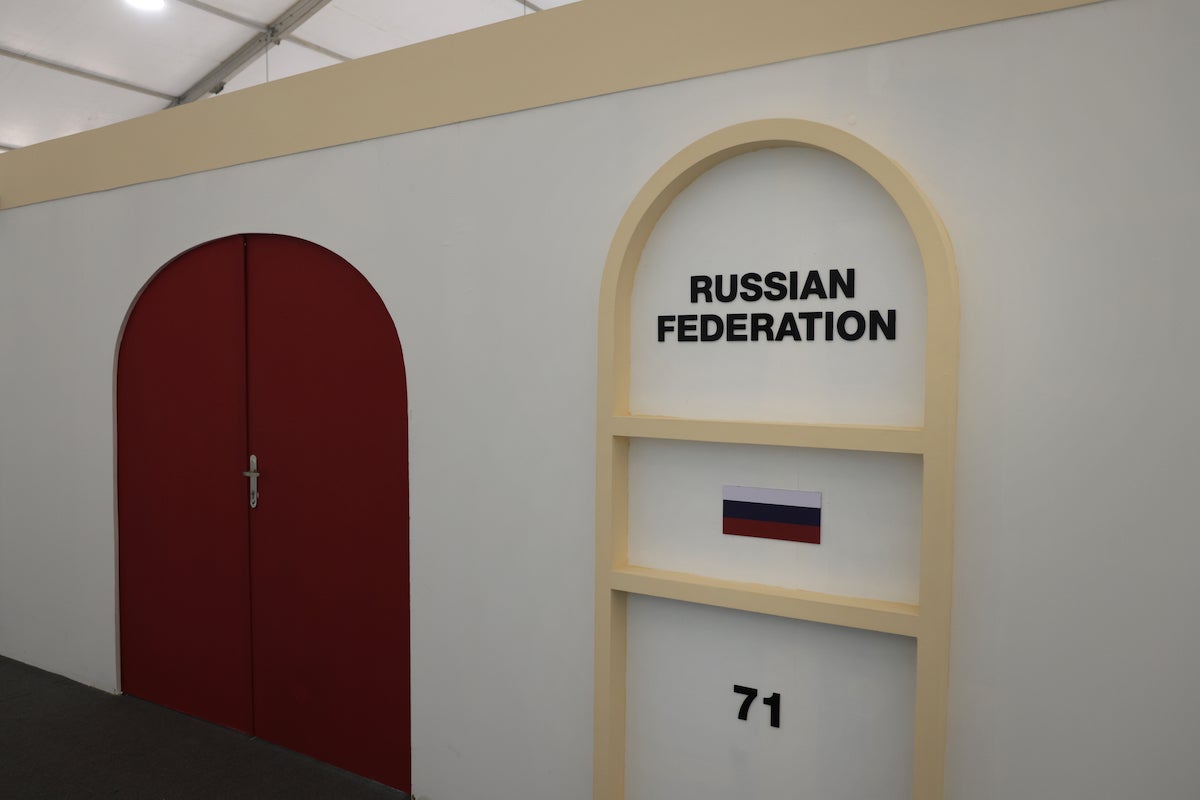 The office of the Russian Federation at the COP27 climate conference in Sharm El Sheikh, Egypt on Nov. 12, 2022. Russia has no pavilion at this year's COP but sent a delegation of lobbyists. Sean Gallup / Getty Images

The more than 600 fossil fuel lobbyists at the COP27 UN climate conference in Sharm el-Sheikh, Egypt, include Russian oligarchs and companies that have been sanctioned in response to the country’s invasion of Ukraine.

The Russian delegation as a whole has 33 members with ties to the fossil fuel industry, the second most of any country after the UAE. Of those 33, more than half of them are either sanctioned themselves or have ties to sanctioned individuals or companies, DeSmog found.

“[It’s] ridiculous to know that Russian oligarchs are sneaking through the corridors,” Ukrainian delegate Dr. Oleksiy Ryabchyn said, as The Guardian reported. “It is ridiculous that they are able to freely travel. For me, if these oligarchs are not able to stop this bloody war then they should not be [at COP].”

Overall, DeSmog calculated that there were 18 Russian delegates who were either sanctioned themselves or tied to sanctioned individuals. These included two coal oligarchs Oleg Deripaska and Andrey Melnichenko. Deripaska has stakes in more than one coal company. He also has former ties to the aluminum industry, The Guardian reported. He is currently sanctioned by the UK. Melnichenko, meanwhile, is under individual sanctions by the EU. The day before the sanctions were implemented in March, he transferred ownership of Russia’s largest coal producing company Siberian Coal Energy Company to his wife, DeSmog said.

There were also delegates from several sanctioned companies present, The Guardian reported. These companies included:

There were also three delegates present from Sibur, Desmog reported. This is Russia’s largest petrochemical company whose former CEO Dmitry Konov stepped down in March when UK and EU sanctions were passed against him.

“Russia’s war crimes are funded with petrodollars churned out by the fossil fuel companies that it has brought into the heart of COP27,” Global Witness senior campaigner Louis Wilson said in response to the findings, as Desmog reported. “These vital talks have already been exposed by our research as awash with the interests of big polluters. Adding in the Russian oil and gas cash machines for Putin’s military makes further mockery of the UN’s climate negotiations.”

Russia is extremely vulnerable to the climate crisis, warming at twice the global average. Despite this, it is ranked as the fourth highest-emitting country in the world.

Russia’s invasion of Ukraine has the potential to destabilize the global push to confront the climate crisis as Europe rushes to make up for reduced gas flows from that country in the near term.

“There can be no effective climate policy without the peace,” Ukrainian President Volodymyr Zelenskiy said in a video message played at the COP27, as Reuters reported. “This Russian war has brought about an energy crisis that has forced dozens of countries to resume coal-fired power generation in order to lower energy prices for their people… to lower prices that are shockingly rising due to deliberate Russian actions.”

The Ukrainian delegation has also emphasized the environmental harms caused by the invasion directly.

“This is not simply a war, this is state terrorism and it is ecocide,” Ukraine’s assistant environment minister Svitlana Grynchuk said, as The Guardian reported. “The invasion has killed wildlife, generated pollution and caused social instability. The terrorist state continues to send missiles to our power plants. Our environment is under threat because of this terrorist attack.”

On the other hand, the energy crisis could provide an object lesson in the importance of transitioning away from volatile fossil fuels to more reliable renewable sources. Ukraine is also promoting the renewable energy transition as a way to undermine Russia’s power acquired via exporting fossil fuels.