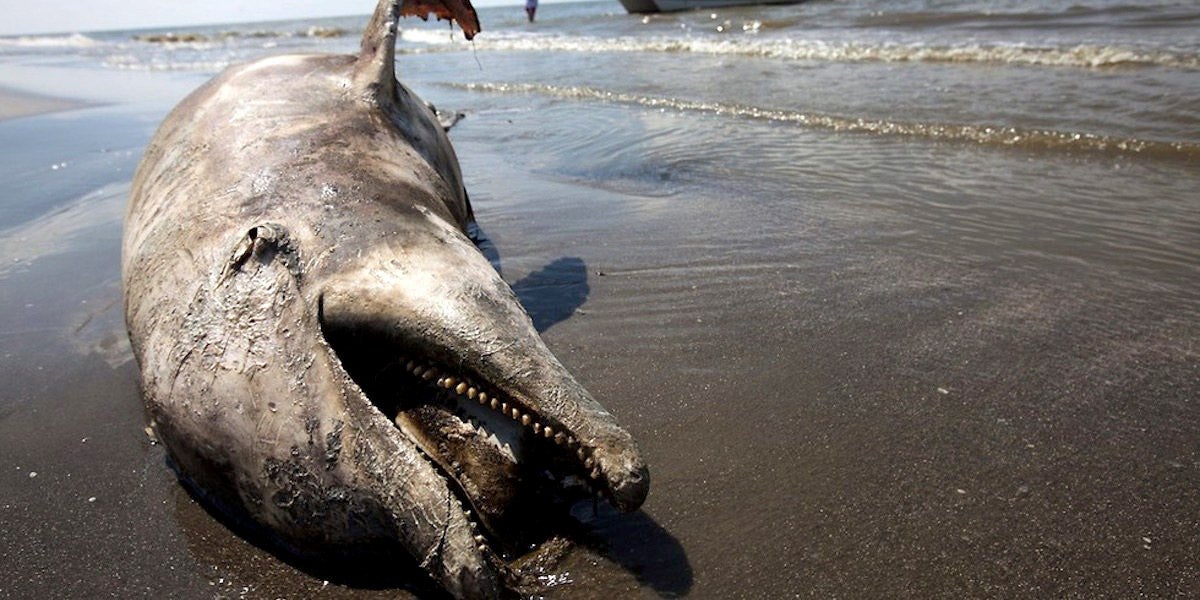 BP’s 2010 Deepwater Horizon explosion that claimed the lives of 11 men, killed numerous dolphins and other marine life, and released millions of barrels of oil and natural gas into the Gulf of Mexico was an environmental disaster. The catastrophe has left far-reaching impacts on the region’s economy and ecosystems that continue to this day. This is fact.

But leave it to Rush Limbaugh to alternative fact the BP oil spill, claiming on his radio show this week that it “didn’t do any damage” to the environment.

For context, the right-wing radio host—who has apparently said many ridiculous things about the event before—was citing the conservative publication Daily Caller, which recently posted a story titled, “Bacteria Are Eating Most Of The 2010 BP Oil Spill.”

The Daily Caller story was based on a new paper published in the Proceedings of the National Academy of Sciences. Researchers from the Lawrence Berkeley National Laboratory in California simulated the conditions of the oil spill in their lab and found a new bacterium that helped break down the oil, suggesting that the same bacteria has gobbled up the oil in the Gulf.

Limbaugh, ignoring the seven years of havoc wrecked by the explosion, said this on his June 28 show:

Do you remember what I said about this? I said that there is oil seeping into the ocean from the ocean floor daily all over the planet. That the ocean has little things in it that eat the oil. That the ocean has a natural cleaning process that actually is part of the food chain, that oil is food for certain creatures that live there. And do you remember how I was pooh-poohed over that? Oh. I mean, the environmentalist wackos and the leftists came after me, “You’re not a scientist. You don’t know what you’re talking about.” But they were searching in vain for the oil. They couldn’t find it.

I have a story here from The Daily Caller: “Bacteria Are Eating Most Of The 2010 BP Oil Spill.” It’s another example of being on the cutting edge of societal evolution. “Oil-eating microbes ate most of the oil BP spilled into the Gulf of Mexico in 2010, according to new research by scientists with the Lawrence Berkeley National Laboratory. The study discovered and sequenced the DNA of a new type of natural oil-eating bacteria.”

It’s exactly what I told you was happening: that there are microbes and creatures in there that literally eat the oil. They feed off of it. “Knowing how oil-eating bacteria behave will help prevent future oil spills from doing as much damage to the environment as the BP spill.” The BP spill didn’t do any environmental [damage]—that’s the whole point! They couldn’t find the oil! I know what some of you are—”What about the Exxon Valdez, Rush? What about up there in Alaska where the captain, what—.” Well, that was a different body of water than the Gulf of Mexico.

You can read the rest of his rant here or listen to it on MediaMatters.

To clean up the spill, BP cleanup crews released about 1.8 million gallons of chemical dispersants into the Gulf of Mexico, which not only had detrimental consequences on the region’s species, but a 2015 Proceedings of the National Academy of Sciences study suggested that the approach backfired.

“The dispersants did a great job in that they got the oil off the surface,” University of Georgia marine scientist Samantha Joye, a co-author of the study, told the Associated Press then. “What you see is the dispersants didn’t ramp up biodegradation.”

Joye also told The Atlantic that 24 to 55 percent of the oil spilled from the Deepwater Horizon rig off the Louisiana coast is unaccounted for and suspects much of it is on the seafloor.