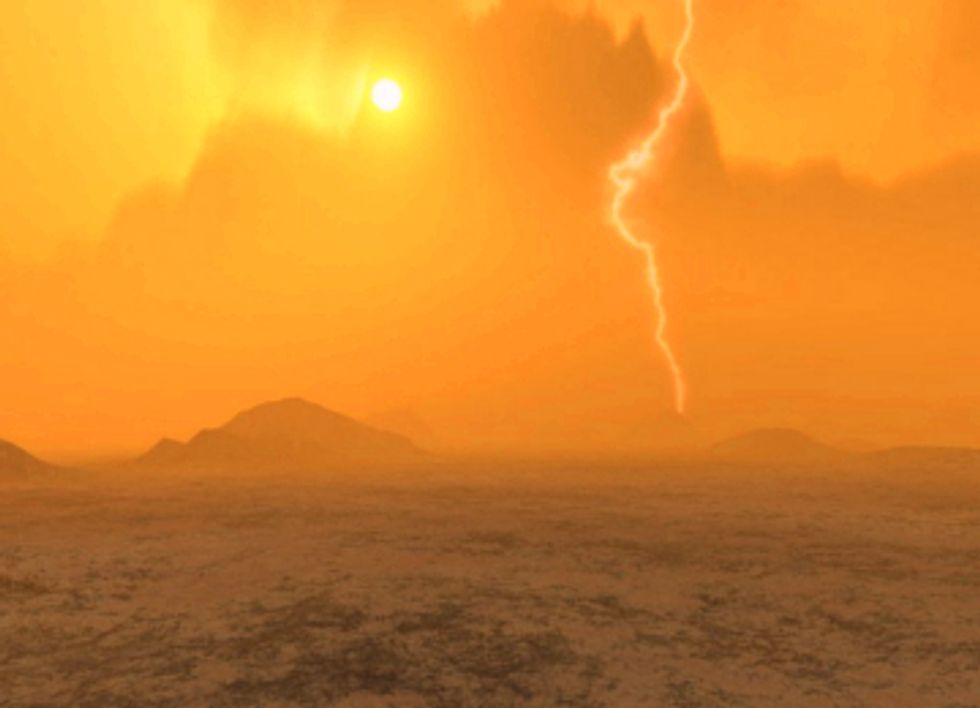 There is already a runaway greenhouse effect on the planet Venus: all the oceans have boiled away, the clouds rain sulphuric acid and the atmosphere at ground level is hot enough to melt lead. The only comfort is that if such a transformation does affect the Earth, it probably won’t be for a billion years or so.

Colin Goldblatt of the University of Victoria in Canada and U.S. colleagues report in Nature Geoscience that they have been taking a new cool look at what makes one terrestrial planet temperate and stable and the other so hot that the ocean boils away, and the answer is disconcerting. Both outcomes are possible for a planet that receives the same level of solar radiation as the Earth does today.

“A runaway greenhouse could in theory be triggered by increased greenhouse forcing, but anthropogenic emissions are probably insufficient,” the authors say, comfortingly.

The research grows out of a continuing academic interest in the unusual condition of planet Earth—just far enough from the Sun for water to freeze but near enough for some of it to melt and evaporate, massive enough to retain an atmosphere and clouds of water vapor but small enough for a gravitational pull that will allow complex creatures to evolve, grow tall and even fly. Goldilocks, the girl in the British fairy story, chose the porridge that was not too hot, not too cold, but just right, and planetary scientists have co-opted the imagery, and dubbed the Earth the Goldlilocks planet.

But global warming fueled by carbon dioxide (CO2) emissions from the burning of fossil fuels is a warning that “just right” might not be a permanent condition, and environmental campaigners have frequently warned of the dangers of a runaway greenhouse effect—in which an increasingly warmer world means greater and greater releases of trapped carbon and methane, until the process becomes unstoppable. Until the Nature Geoscience paper, the assumption was that such a process was unlikely: a Venus-style runaway warming would require more solar radiation than the Earth actually gets.

But while carefully considering the factors that make Earth such a desirable residence—fully air-conditioned and with hot and cold running water—Goldblatt and his colleagues found a puzzle. Their numerical models calculated the balance between solar radiation absorbed and thermal radiation emitted and found that the sunshine levels on Earth now would actually make a runaway greenhouse possible.

What makes the difference right now are the clouds, which serve to reflect radiation back into space and which eventually condense and return evaporated water to the land and then the oceans. But water vapor is also a greenhouse gas, so as long as the vapor forms clouds that provide what engineers call negative feedback, and damp down the warming, the temperatures stay within manageable limits. But the logic is that with greater levels of greenhouse gases—and with fewer clouds—conditions could change, the atmosphere would become steamier, ever more heat would be retained and eventually life would become impossible.

But there has never been a runaway greenhouse on Earth—it would have sterilized the planet and life would never have emerged at all—and the planet has been at least 10 degrees Celsius hotter during the Eocene 50 million years ago, when CO2 levels were much higher.

“With CO2 and temperature both higher then than we expect in the foreseeable future, this implies that an anthropogenic runaway greenhouse is unlikely,” the authors conclude.

But they also warn that Venus today is a reminder of what the Earth could become, and they expect a runaway greenhouse on Earth in about 1.5 billion years “if water is the only greenhouse gas, or sooner if there are others.”