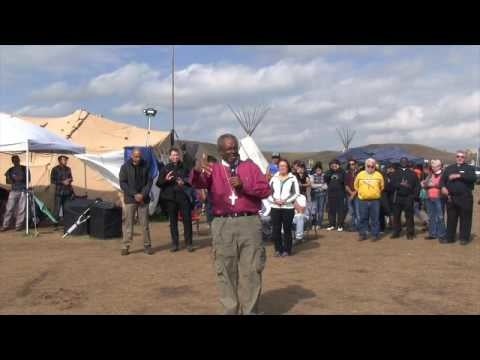 On Sept. 24, 2016 at the Oceti Sakowin Camp, the reverend offered the Episcopal Church’s solidarity with the water protectors, noting that, “Water is a gift of the Creator. We must protect it. We must conserve it. We must care for it.”

Ruth Hopkins, a Dakota and Lakota Sioux writer, and Levi Rickert, the publisher and editor of Native News Online, separately made the observation over the weekend.

Curry, the first African-American presiding bishop of the American Episcopal Church, also drew similarities between the Standing Rock movement to the Civil Rights movement of the 1960s, during which African Americans faced beatings from “angry mobs” during the Selma to Montgomery voting rights marches.

“Selma was a turning point in the struggle for civil and human rights in this country,” Curry said. “And I want to suggest now that Standing Rock may be the new Selma.”

During his visit to the reservation, Curry also spent an hour listening to people’s hopes for the protest and for the church’s role in supporting the pipeline opponents, the church said.

Environmental stewardship is a core value the American Episcopal Church. In June, Rev. Curry reinforced the church’s commitment to the goals of the Paris agreement after President Trump announced his intention to withdraw from the global climate accord.

“The United States has been a global leader in caring for God’s creation through efforts over the years on climate change. President Trump’s announcement changes the U.S.’s leadership role in the international sphere,” Curry said in a statement then.

“Despite this announcement, many U.S. businesses, states, cities, regions, nongovernmental organizations and faith bodies like the Episcopal Church can continue to take bold action to address the climate crisis. The phrase, ‘We’re still in,’ became a statement of commitment for many of us who regardless of this decision by our President are still committed to the principles of the Paris agreement.”

In his royal wedding sermon over the weekend, Curry referenced Martin Luther King, Jr. and preached about the power of love changing the world. Similarly, at Standing Rock two years ago, the bishop also quoted MLK’s famous words from Alabama’s Birmingham jail.

“The truth of the matter is, we are all interconnected, we are all tied together in a single garment of destiny,” Curry said.

Environmental causes appear to be important to the new royal couple. Markle wore an evening dress designed by eco-friendly designer Stella McCartney and Prince Harry, whose family is very dedicated to a range of conservation issues, drove a converted electric Jaguar for their wedding reception.

The couple also requested that in lieu of gifts, well-wishers donate to seven charities, including two environmental groups: Surfers Against Sewage and The Wilderness Foundation UK, CNN reported.