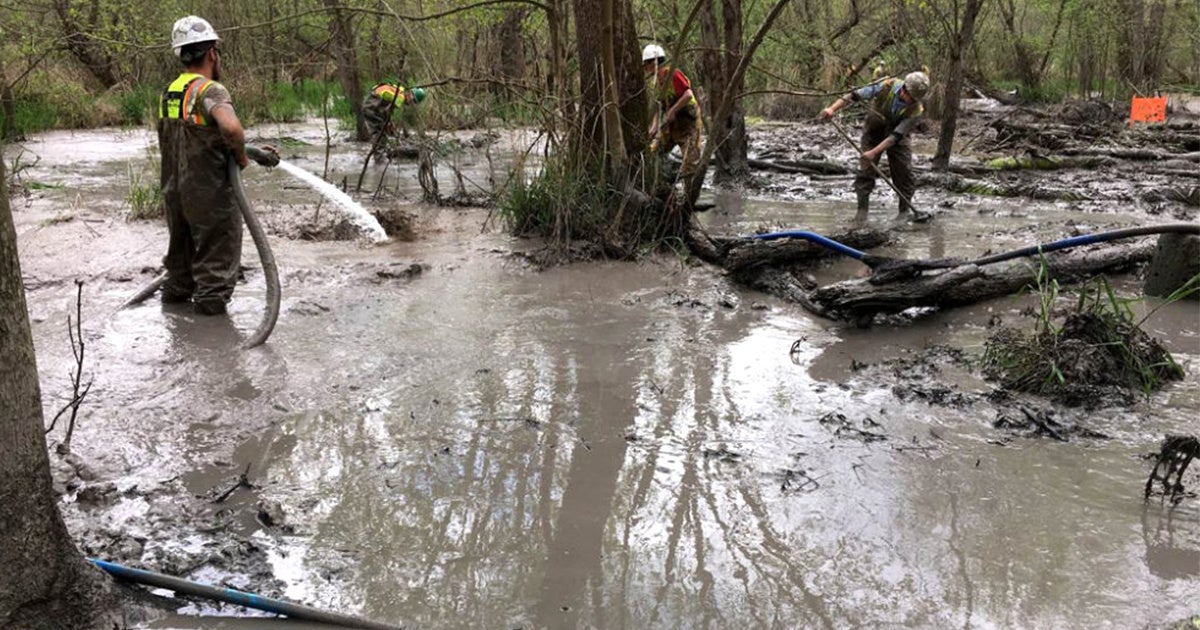 The site of an April spill involving the Rover Pipeline. Ohio EPA

“The significant thing that is very new here is that Ohio EPA has said that they are working very closely with the Federal Energy Regulatory Commission,” observed Cheryl Johncox of the Sierra Club. FERC issued a July 12 order that echoes multiple directives from the Ohio EPA’s July 7 order to Energy Transfer Partners.

FERC also issued another notice of violation on July 13, claiming that Energy Transfer Partners “did not fully and forthrightly disclose all relevant information” before demolishing a historic home. Meanwhile, more problems with the project have also emerged in Michigan and West Virginia.

The concerted federal and state enforcement actions in Ohio, plus the other disputes, could slow plans for the pipeline to begin operation early next year.

On July 2, drilling for the Rover Pipeline project released 5,000 more gallons of drill slurry into a Stark County area where the company was working on a five-foot borehole that would go under the Tuscarawas River. Work was already underway to deal with a previous spill in that area.

On July 3, another “inadvertent release” of 1,500 to 2,500 gallons of drilling mud took place at a nearby area ten feet from the river.

This month’s leaks are a tiny fraction of the millions of gallons already released by the Rover Pipeline’s drilling work in Ohio. The Ohio EPA issued a proposed administrative order against Energy Transfer Partners in May.

On July 7, Ohio EPA Director Craig Butler issued final findings and orders to Energy Transfer Partners, adding the new releases to its initial list of charges. The order also notes that some previously-leaked material had subsequently been found to contain diesel fuel.

The fluids are defined as “industrial waste” under Ohio law and must go to a licensed landfill or other authorized location, the July 7 order noted.

The total fines sought from the company so far exceed $900,000, and the matter has been referred to the Ohio Attorney General’s office for possible further action. Announcing the referral on July 10, Butler described the company’s response leading up to the action as “basically a stiff arm to the state of Ohio.”

“We continue to work with FERC and the Ohio EPA to resolve these issues in a manner that is satisfactory to everyone involved,” said spokesperson Alexis Daniel at Energy Transfer Partners.

Daniel identified the additional materials released this month as “drilling mud, which is made up of water and naturally occurring bentonite clay. Bentonite is a type of clay that is non-toxic.”

Daniel provided no explanation for how diesel fuel got into some of the previously released material. “We are working with the Ohio EPA on the investigation of this matter,” she said.

Johncox applauded the Ohio EPA “for really doing the right thing here and demanding that they [Energy Transfer Partners] clean up the mess that they have created.” In her view, the company’s actions so far have shown “basic disregard for their plan on how they’re going to protect the waters of our state.”

She and other environmental advocates are especially concerned about the finding of diesel fuel in some of the previously released material.

“Everyone was talking about it as nontoxic material. That was a talking point,” said Melanie Houston at the Ohio Environmental Council. “It turns out it really was toxic material.” Even a very small amount “can pollute the river and be a real concern for aquatic life,” she noted.

As an added concern, some used drilling mud has already been deposited in former sand and gravel quarries. “Quarries can be very close to the groundwater supply,” Johncox said.

The Ohio EPA’s July 7 order calls for a plan by Energy Transfer Partners to remove wastes from quarry sites and dispose of them in a way to be approved by the agency. Additional sampling and groundwater monitoring is also required.

Follow-up action from FERC is also likely, Johncox noted. In May, federal regulators told Energy Transfer Partners to conduct additional environmental review and to delay construction at several spots along the pipeline route.

A flood of concerns

Controversy has surrounded all phases of the Rover Pipeline project so far, including its route in Ohio and Michigan, concerns about compressor stations and disputes with landowners.

The July 13 notice of violation from FERC appears to relate to the company’s previous purchase and demolition of the Stoneman House in Carroll County, Ohio. The company agreed last month to pay $1.5 million to the Ohio History Connection Foundation in connection with that dispute.

Also last week, residents near Silver Lake in Michigan held a protest against the company’s latest move there, which would block the sole drainage point for a wetland area. Homes and a YMCA day camp are nearby.

“This newest development is further evidence that Energy Transfer is ignorant of the geology in the areas in which it is building,” said Laura Mebert, an assistant professor of social science at Kettering University in Flint, Michigan.

Energy Transfer Partners got a permit for the planned work from the Michigan Department of Environmental Quality several months ago. However, that permit “was granted in error,” said Toledo attorney Terry Lodge, who represents pipeline opponents in both Michigan and Ohio. “Neither MDEQ nor Rover apparently understood the watercourse that was going to be affected by the trenching.”

When representatives from the state and pipeline company previously visited the area, they “failed to understand that the marshland continues downstream as a narrow creek,” Lodge explained. “There is potential for flooding that could harm foundations and other aspects of at least a dozen homes if the elevation of the flood plain is altered.”

On July 12 Michigan Senators Debbie Stabenow and Gary Peters wrote to FERC, asking for a temporary halt on that part of the work. If the request is granted, it would block the work there for now. But, Lodge noted, the senators’ letter itself is not legally binding.

Although the company might argue that concerned parties should have commented on the Silver Lake problem during the public comment period, Lodge believes the neighbors have strong grounds for their complaints.

“Federal courts interpret [the National Environmental Policy Act] to require the lead agency—here, FERC—to conduct an independent investigation of any possible environmentally destructive feature of the project when it is discovered, even at this late state,” Lodge explained.

As a practical matter, he added, if the company moves forward before the situation has been addressed fully, there is a prospect for “monetary liability if serious flooding is caused, and interruption of operations of the pipeline if there is a subsequent realignment or other change required.”

“Safety remains a top priority to us, and we continue to work closely with FERC on the safe construction of our approved route,” Daniel said. “It is always our goal to work closely with affected landowners, governments and the neighboring communities to foster long-term relationships and build the pipeline in the safest, most environmentally friendly manner possible.”

On July 14, the ISKCON New Vrindaban religious community in Moundville, West Virginia drew FERC’s attention to yet another potential problem.

The pipeline route had already been changed to avoid sacred areas on the community’s property. Project representatives were advised at that time that the alternate area agreed upon was already slated for longwall coal mining this summer, said Gabriel Fried, secretary/treasurer and executive agent for the religious community.

The better practice would be for the Rover Pipeline project to delay that part of the construction for a few weeks after Murray Energy finished undermining, Fried said. That would allow time for subsidence to take place, he noted, adding that he has decades of experience as a former pipe welder.

Leaving the ditch uncovered could allow for correction of obvious problems, Fried said. “But if there’s stress on the pipe due to it being undermined, they’re not going to know it,” he said. “And that means it’s an action waiting to happen.”