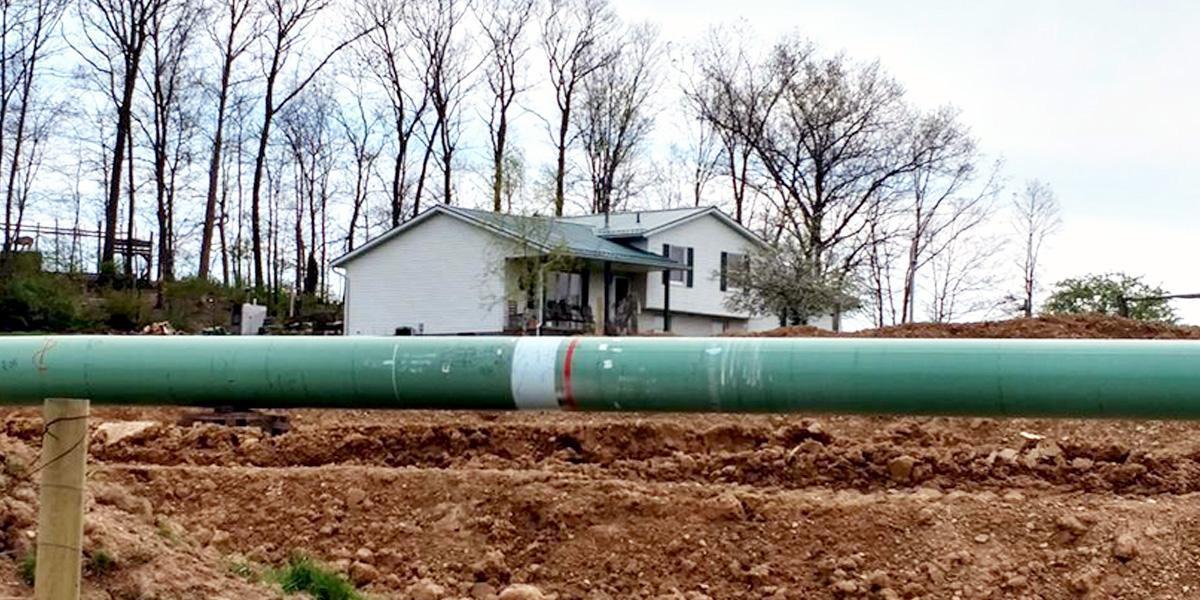 After taking heat last fall for destroying sacred sites of the Standing Rock Sioux Tribe, the owner of the Dakota Access pipeline finds itself embattled anew over the preservation of historic sites, this time in Ohio.

Documents filed with the Federal Energy Regulatory Commission (FERC) show that Energy Transfer Partners is in the midst of a dispute with the Ohio State Historic Preservation Office over a $1.5 million annual payment owed to the state agency as part of a five-year agreement signed in February.

Energy Transfer Partners was set to pay the preservation office in exchange for bulldozing the Stoneman House, a historic home built in 1843 in Dennison, Ohio, whose razing occurred during construction of the Rover Pipeline. Rover is set to carry natural gas obtained via fracking from the Utica Shale and Marcellus Shale—up to 14 percent of it—through the state of Ohio. The pipeline owner initially bulldozed the historic home, located near a compressor station, without notifying FERC, as the law requires.

FERC provides regulatory and permitting oversight for interstate pipeline projects like Rover, and as a result, is tasked with performing an environmental and cultural review. Because Energy Transfer Partners didn’t notify the commission of the plan to tear down the historic home, citizens and other concerned stakeholders, including the Ohio State Historic Preservation Office, did not have the ability to file a formal protest of the action. 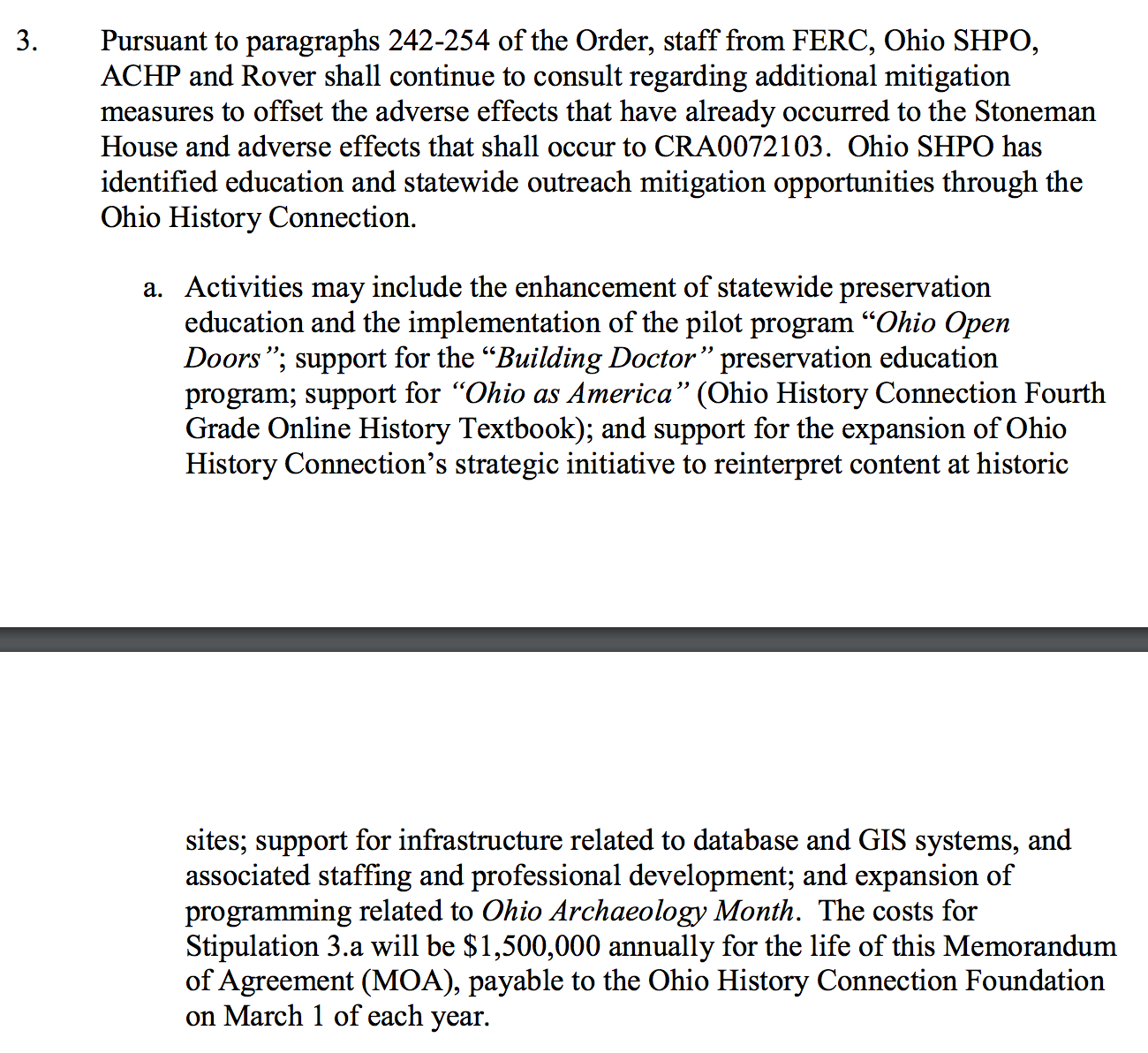 In a March 2015 email, an Energy Transfer Partners employee, whose name is redacted in a filing docketed with FERC, acknowledged that bulldozing the home could create “negative regional PR.”

“I agree that tearing down the house could be a politically risky strategy,” wrote the official. “[I]t may negatively affect the relationships with our reviewers and possibly result in some negative regional PR. We also told FERC that we would work with the [State Historic Preservation Office] to get to a place where there was no adverse effect.”

In the past few weeks, FERC, Energy Transfer Partners and the Ohio State Historic Preservation Office have exchanged several letters related to the conflict over payment owed for razing the Stoneman House, which the parties agreed upon in the Memorandum of Agreement.

“The Ohio State Historic Preservation Office has been in repeated contact with representatives from Rover LLC regarding the fulfillment” of the monetary commitments outlined in the Memorandum of Agreement [MOA], wrote Logan. “As of this date, no efforts have been made to meet those obligations. As the lead federal agency with jurisdiction over this undertaking, we are notifying you of this dispute.”

William Scherman, an attorney for the firm Gibson, Dunn & Crutcher, currently is serving as legal counsel to Energy Transfer Partners and sent his own letter, which Energy Transfer Partners provided to DeSmog, to FERC on May 10. The letter also requested that FERC step in to resolve the dispute. Scherman previously served as FERC general counsel and chief of staff under Presidents Ronald Reagan and George H.W. Bush.

“Certain facts regarding the generation and completion of the MOA and the handling of the mitigation monetary provision were misleading and in error, and therefore we do believe that there is an impasse to resolution at this time,” wrote Scherman. “Rover believes any additional contribution is unwarranted and unfair, and Rover is willing to vigorously defend itself against any attempts to leverage any additional contribution.”

Gibson, Dunn & Crutcher is a firm best known for providing legal counsel to Chevron in the ongoing litigation between attorney Steven Donziger and indigenous plaintiffs in Ecuador against Chevron. That lawsuit and complex litigation battle, which has now dragged on for nearly 25 years, centers around the legacy of oil pollution and contamination in the country.

FERC, in turn, responded on May 17 to the letters from the Preservation Office and Energy Transfer Partners, giving them a three-week dispute resolution period.

“If this dispute is not resolved by the end of that period, commission staff will provide its recommended final decision on the dispute, along with all documentation it deems relevant to the dispute, to the [Advisory Council on Historic Preservation] for its review and comment,” reads the FERC letter. 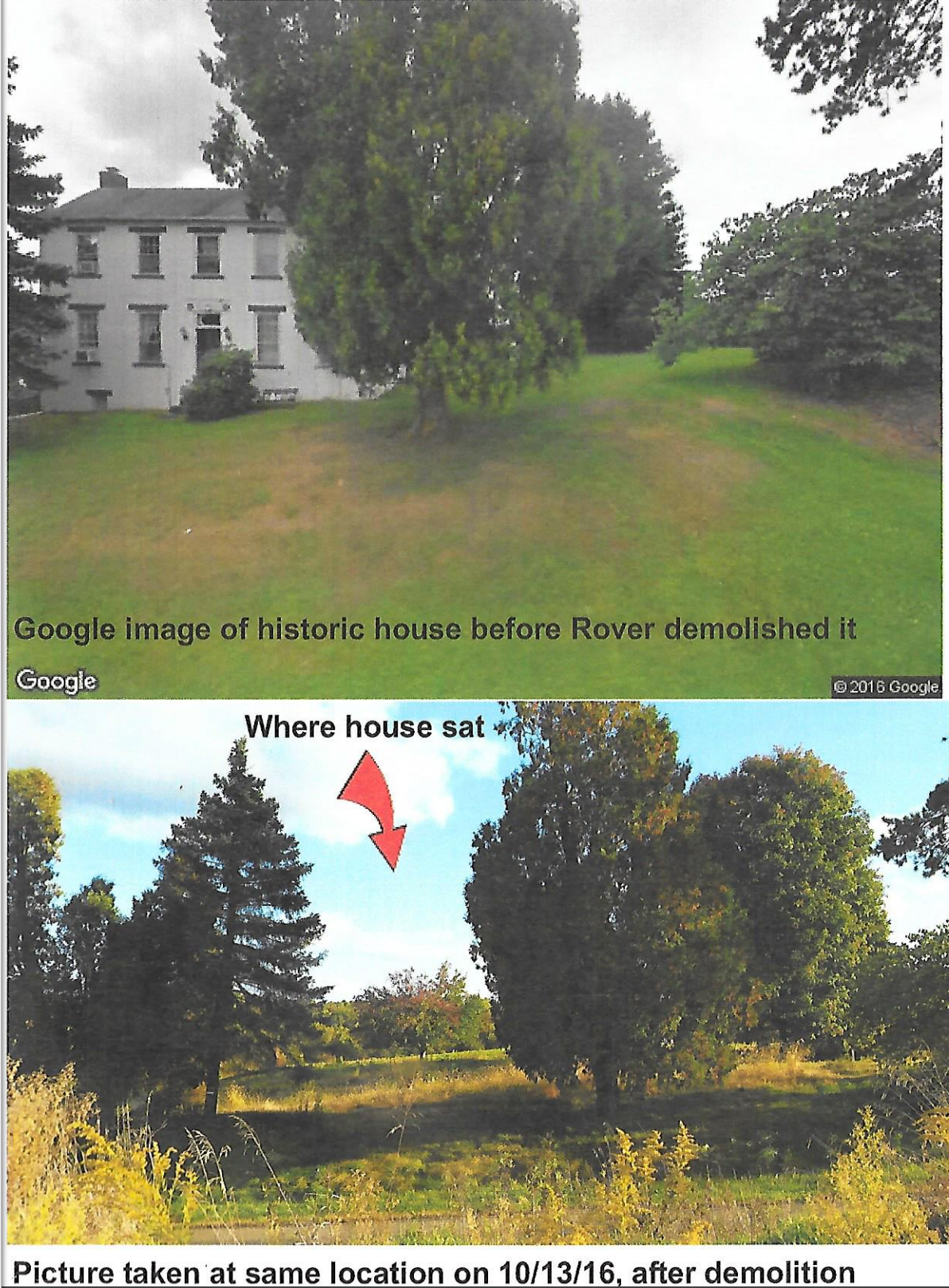 A spokesperson for Energy Transfer Partners told DeSmog that it will “decline to comment as we continue to work with all parties” on resolving the issue.

“FERC has responded to our letter. We’re entering into dispute resolution with FERC at this time,” Emmy Beach, public relations manager for the Ohio State Historic Preservation Office, told DeSmog. “At this point, the matter is up to FERC to decide what happens next.”

For its part, Energy Transfer Partners has offered a blanket $2.3 million payment which would go to the Ohio State Historic Preservation Office and $1 million of it would go directly to all the 18 counties through which Rover crosses. The other $1.3 million would go toward historic preservation efforts statewide in Ohio.