Roundup Is Killing Us 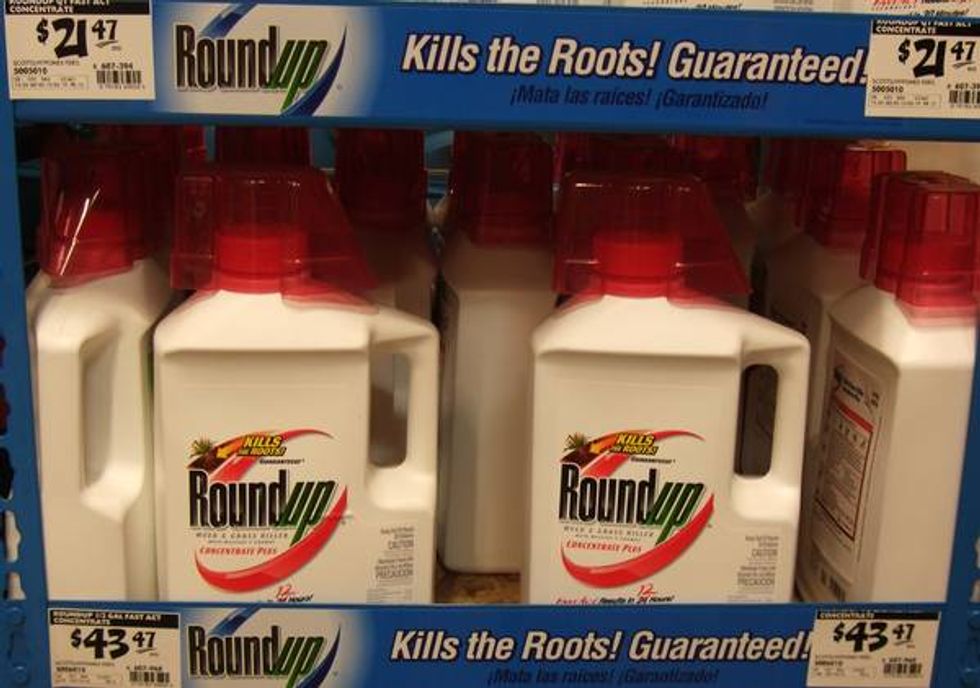 The forum, at the Acres USA conference Dec. 9 in Columbus, Ohio, lasted two and a half hours. For 150 minutes, Dr. Don Huber dispassionately laid out fact after fact, more research than was possible to digest, with almost surgical precision that led to the same unavoidable conclusion—“Roundup is the most widely abused product in American history.”

The result, he said, is the death of agriculture, our livelihoods and the planet as we know it. A pesticide product which was supposed to just be killing weeds, he stated bluntly, is systematically killing us.

When he was done, I snapped a photo of his final slide with my iPhone that talked about our children’s futures. I knew I would soon be heading home to enjoy a holiday weekend setting out decorations, cutting down a tree and sipping hot chocolate with two precious little girls—yet I also knew my life would never quite be the same.

“Future historians may well look back and write about our time, not about how many pounds of pesticide we did or did not apply, but by how willing we were to sacrifice our children and jeopardize future generations based on false promises and flawed science, just to benefit the bottom line of a commercial enterprise.”

You simply can’t hear what Don Huber had to say and then go blindly about your life. At least I can’t.

So this weekend I shuddered when I looked at the base of the Christmas trees, where Roundup had been sprayed to make things look clean for holiday lumberjacks. I scowled at the shelves of the garden center where the poinsettias stood like bright sentries announcing the season at hand. At the end of the row, canisters of Roundup awaited spring, when they would be as eagerly gobbled up by customers as the Christmas flowers were on this day.

We sang Christmas carols. We baked cookies and set our tree in its stand, yet as I draped lights and hung ornaments, Dr. Huber’s words echoed in my ears. I kept thinking about the fact this would be my first holiday season without my grandmother and my aunt, both of whom were claimed by Alzheimer’s Disease. Dr. Huber told the audience the incidence of Alzheimer’s is expected to skyrocket in the next 20 years, probably because Roundup robs so many essential micronutrients from our food.

As we talked of our holiday plans and the friends and family we’ll visit, our hearts ached for our lovely, amazing friend, Mary, who will spend Christmas week tethered to a chemotherapy drip. She’ll make it through, because she’s a ferocious fighter. But why should she have to fight so hard? Is it because when we inhale Roundup it then targets our livers, our kidneys, our hormones, our bones, our thyroids and our sex organs? And Roundup is literally everywhere in the air and water we breathe.

It’s impossible not to take this personally if you let yourself think about it. Do you know anyone with autism, ADHD, endometriosis, Crohn’s disease, dementia, Parkinson’s? If so, then you know someone who has been affected by the atrocities of Roundup. Do you know anyone who’s overweight, even obese? Of course you do, since one in three Americans now fall into that category. Well, it’s not because those people are lazy, or want to eat too much, or because their grandparents were fat and the gene was passed down. It’s because people don’t get enough essential nutrition in their meals each day, so they eat more to compensate.

And why don’t the meals have enough nutrition? It’s because most of our food is grown while being sprayed with Roundup, which reaches into our bodies and soils and steals things like nitrogen, phosphorus, potassium, calcium, magnesium, sulfur, boron, copper, and especially iron, manganese and zinc. Whether you understand bodily function, or not, all you need to know is that without these essential elements in their daily essential amounts, your body stops working properly. Disease becomes rampant.

Dr. Huber told the audience that his life changed profoundly the day he allowed SafeLawns to leak his letter to the Secretary of Agriculture to the general public last February. In that letter, he warned that a newly studied soil organism was capable of living among plants and animals, and that it was causing spontaneous miscarriage in humans. He warned that the appearance of the organism was heightened when Roundup was sprayed, as if Mother Nature were fighting back.

He was vilified. Mercilessly. Often by academics who had been his colleagues for decades.

But on Dec. 9, the 75-year-old emeritus professor—who was widely regarded in all circles as one of the planet’s most respected scientists until he began pointing out a rather inconvenient truth about Roundup—showed us pictures. They were images of a sinister organism that appears to be wreaking havoc that is perhaps irreversible.

“I have practically begged our government to invest more resources into studying this organism before it’s too late,” he said. “To date, I’m not seeing any action being taken.”

Since the government won’t act against the manufacturer, Monsanto, or the sellers like Scotts Miracle Gro or your local garden center, that means it’s up to you to vote with your wallet by not buying the stuff. It’s up to you to understand that approximately 80 percent of our commercial food supply is grown in a Roundup Ready environment—and that to support organic food and farming is to support a planet without Roundup.

Maybe instead of Christmas cards this holiday season, you can send a strong message to your elected officials that foods genetically modified to resist Roundup ought to be banned as they are in many European communities. They call our sustenance Frankenfood.

The world has a lot of problems these days and it can come off as hyperbolic ranting to suggest that so many problems are the result of a weed killer that comes in a ready-to-use spray bottle at your local hardware store. The thing about Roundup, though, is that unlike many maladies, it’s a problem we can control. We don’t have to use Roundup. We don’t have to eat the food produced with it.

And if we stop doing that, the problem could conceivably go away.

For our children’s sake we need to make this happen now.

In the meantime, don’t just take it from me. Click here for a great interview with Dr. Huber.

It encapsulates many of the similar points he made last Friday before the audience, numbering in the hundreds, who stood for a long, almost sobering standing ovation. It wasn’t the kind of raucous applause we lavish on Broadway actors or athletes on a field, but rather a respectful, somber homage to a man who is daring to try to save us from ourselves.