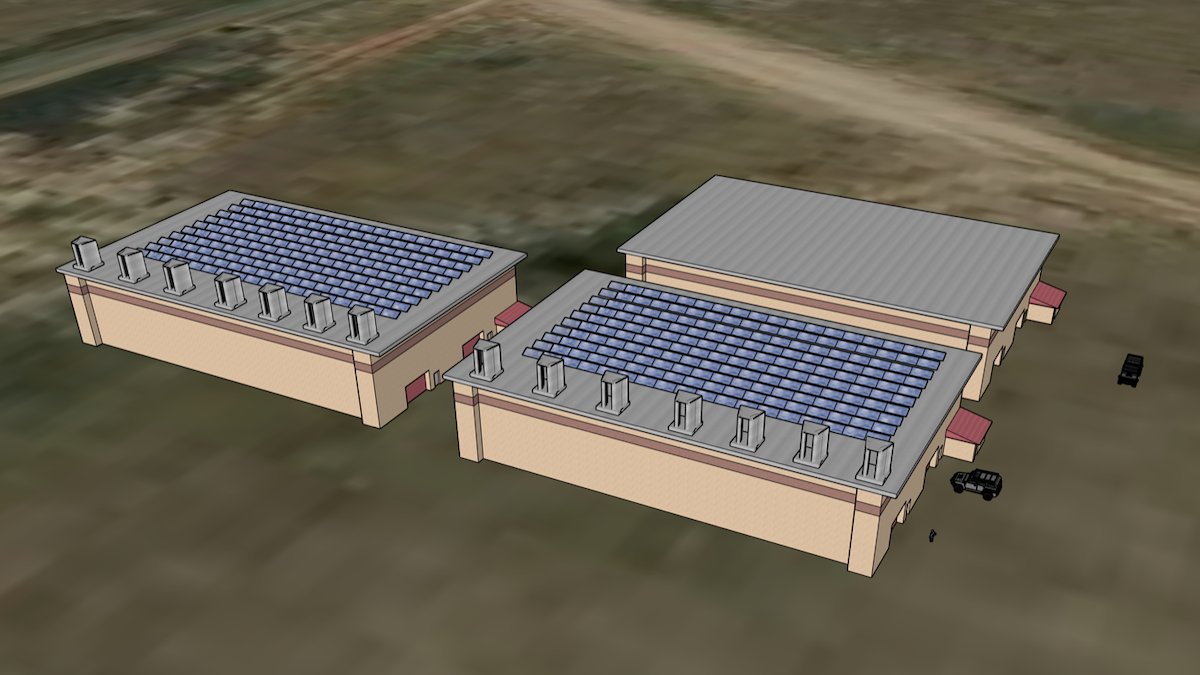 An artist's rendering of AeroMINES along the edge of a roof and combined with solar arrays. Sandia National Laboratories

Solar panels perched on the roofs of houses and other buildings are an increasingly common sight in the U.S., but rooftop wind systems have never caught on. Past efforts to scale down the towering turbines that generate wind power to something that might sit on a home have been plagued by too many technical problems to make such devices practical. Now, however, a new design could circumvent those issues by harnessing the same principle that creates lift for airplane wings.

Overall, electricity generated by renewable sources has grown in the U.S. in recent years, and wind power has been a major driver of that trend. It accounts for more than 40 percent of electricity from renewables in the U.S. (though only 7 percent of all electricity production). Unlike solar energy cells, which are limited to collecting energy during daylight hours, wind turbines can run all night in any place with the right conditions—namely, in open plains or gentle hills with consistently sufficient wind speeds. But in addition to those requirements, large turbines need open space, which is not always available near towns and sprawling cities. Installing rooftop wind systems on homes and city buildings could help harness more of this resource.

When it comes to wind power, size matters. The amount of energy an individual turbine can generate is proportional to the area its blades sweep—so devices that are small enough to fit on a roof are less powerful. “What’s kept distributed wind from being successful is that most of the systems are basically miniaturized wind turbines,” says Brent Houchens, a mechanical engineer at Sandia National Laboratories. The smaller devices do not produce enough energy to be cost-effective. Plus, their quickly spinning blades create noisy vibrations, and their many moving parts are more prone to breakage. Compared with passive rooftop solar panels, wind turbines have the potential to be quite high-maintenance.

Houchens and his colleagues think they have engineered a solution that overcomes these obstacles by borrowing from a fundamental principle of air flight. The curved shape of an airplane wing—called an airfoil—alters the air pressure on either side of it and ultimately produces lift. Houchens’ colleague Carsten Westergaard, president of Westergaard Solutions and a mechanical engineer at Texas Tech University, says he hitched two airfoils together so that “the flow from one airfoil will amplify the other airfoil, and they become more powerful.” Oriented like two airplane wings standing upright on their side, the pair of airfoils directly face the wind. As the wind moves through, low pressure builds up between the foils and sucks air in through slits in their partly hollow bodies. That movement of air turns a small turbine housed in a tube and generates electricity.

Thanks to this design, the device—which the researchers call an AeroMINE (“MINE” stands for Motionless, Integrated Extraction)—can pull wind energy from a larger area (essentially, the AeroMINE’s rectangular face) than its turbine blades could on their own in a traditional setup. Houchens likens such standard turbines to cookie cutters that leave wasted dough behind. The new device makes use of all the available wind, allowing it to extract more energy.

AeroMINEs also do not generate the same vibrations and noise as regular turbines; they are “less noisy than a ventilation fan,” Westergaard says. The relative simplicity of their design means there are fewer moving parts to malfunction. The turbine, which is housed inside a building, would be easier to access if it does need repairs. This arrangement also keeps the blades isolated from any contact with people or wildlife. The team is designing the system so that it could be used in conjunction with rooftop solar panels, plugging into the existing infrastructure to harvest the energy they generate.

“I do think this technology could be groundbreaking” for areas with good wind conditions, says Luciano Castillo, a mechanical engineer at Purdue University, who is not involved in the project but has worked with Westergaard in the past. He also thinks the simplicity of AeroMINEs could make them a good option for developing countries, because the new devices do not require specialized parts or tools and are relatively easy to fix. Castillo and Westergaard both see the potential to use the design underwater to harness tidal energy as well.

Jay Apt, co-director of the Carnegie Mellon Electricity Industry Center, who is also not involved in the project, agrees that the simplicity of the design is attractive. But he is unsure whether the system can be scaled up to efficiently generate energy at a low enough cost in a real-world setting. Houchens says that with suitable wind conditions, he and his colleagues think AeroMINEs can be competitive with the current cost of rooftop solar power.

The team, which has received funding from Sandia and the Department of Energy, has tested scaled-down models in wind tunnels to fine-tune the design. In June the researchers have plans to test a four-meter-tall version of the device on a single-story mock building at the Scaled Wind Farm Technology (SWiFT) facility, part of Texas Tech’s National Wind Institute.

This story originally appeared in Scientific American and is republished here as part of Covering Climate Now, a global journalism collaboration strengthening coverage of the climate story.