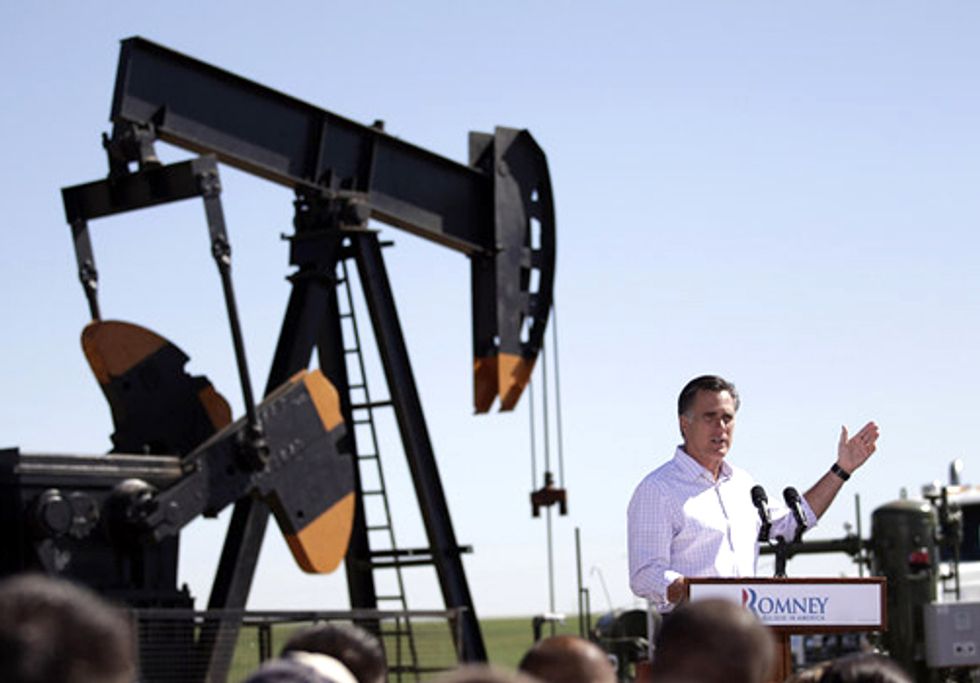 The energy plan released last week by Mitt Romney and Paul Ryan and the leaked GOP energy platform would take America back to the dirty energy technologies and Wild West energy exploration of the past. Both the plan and the leaked platform focus on increased production and use of fossil fuels such as coal and oil, while doing little to increase truly clean energy production such as wind and solar or increasing energy efficiency.

Instead of moving forward with clean technology and public health protections, the Romney-Ryan plan takes us backwards to increased air pollution and reliance on 1950s energy generation technology.

Ignoring science and new technology, the Romney-Ryan plan would keep us burning fossil fuels like coal and oil as our main sources of energy. Fossil fuel power plants spew dangerous air pollution that fuels global warming and causes asthma and lung disease, heart attacks and neurological damage. Instead of cleaning up power plants or investing in pollution-free energy to secure a cleaner future, the Romney-Ryan plan would roll back clean air protections and fund new development of oil, gas and nuclear power.

The Romney-Ryan plan’s assault on the Clean Air Act would:

Instead of moving forward with a coordinated strategy to harness pollution-free solar and wind energy, the Romney-Ryan plan takes us back to a Wild West free-for-all for drilling and mining on scenic public lands and off our coasts with only a patchwork of state oversight.

The Romney-Ryan energy plan opens up federal lands to new drilling and mining while forgoing a national scope for planning and approval of energy development. The Romney-Ryan plan would allow oil and gas drilling on public lands and in the Arctic National Wildlife Refuge, putting drinking water supplies at risk of toxic contamination and opening up America’s most treasured landscapes to oil rigs and gas wells.

The Romney-Ryan plan would aggressively open up new areas to offshore oil drilling, starting off the coasts of Virginia and North Carolina and including the Atlantic and Pacific coasts, the Gulf of Mexico and the coast of Alaska. This reckless step backwards would leave our coastal economies and wildlife vulnerable to oil spills. While opening up new areas across the country for energy development, the Romney-Ryan plan would take us back to a Wild West free-for-all with no central coordination, by handing off siting and approval responsibilities to an inadequate patchwork of state review processes.

The Romney-Ryan plan would approve the Keystone XL pipeline, and would also irresponsibly expedite approval processes for other pipelines and infrastructure to bring dirty fuels from neighboring countries into the United States, threatening the areas through which the pipelines travel and furthering our dependence on dirty and outdated energy sources.

Instead of moving forward with policies to boost our economy with clean renewable energy and local jobs, the Romney-Ryan plan continues funneling billions of dollars in giveaways to oil and gas companies.

Both the Romney-Ryan plan and the Ryan budget would keep $2.4 billion in annual tax breaks for the five biggest oil companies–BP, Chevron, ConocoPhillips, ExxonMobil, and Shell–that made a record $137 billion in profits last year, and more than $60 billion so far in 2012. In addition, the Romney-Ryan plan would provide a $2.3 billion tax cut for the big five oil companies via its proposed cut in the corporate tax rate.  With the existing tax breaks, the five biggest companies would take more than $4 billion annually from the U.S. Treasury. These are mature industries that no longer need government support.

Mitt Romney would allow critical tax credits for wind power expire this year. Wind is a thriving domestic industry that supports 75,000 American jobs and is the second fastest growing energy sector in the U.S., representing 32 percent of added energy capacity in 2011. Instead of rewarding innovation and job creation, Romney says he would allow support for wind to expire, while his plan will continue to bankroll the oil and gas industry.

Instead of moving forward with real energy independence by harnessing renewable energy sources like wind and solar power that are pollution-free and never run out, the Romney-Ryan plan ensures continued oil dependence and tethers us to finite resources that will pollute our air and water and mar our landscapes.