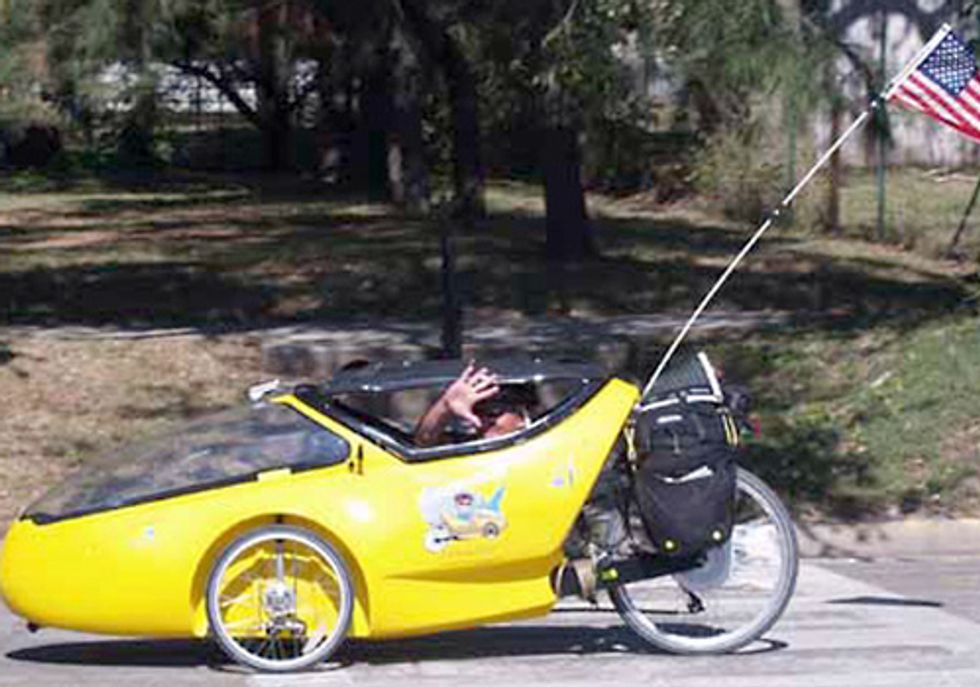 Renewable Rider Tom Weis meets Nebraska rancher Teri Taylor and South Dakota rancher John Harter at a local diner in Newport, Neb. Teri shares how the 3-year fight against Keystone XL has "taken over" the lives of her family. Describing an "environmentalist" as one who seeks to protect the natural resources of this country, she asks, "Do we not all respect the land, the water, the animal life, the plant life, the air?" John says he was not only lied to, but forced into eminent domain court by TransCanada. Explaining that the corporation refuses to accept liability, he describes how a pipeline oil spill on his property would make his land worthless. He condemns TransCanada's "lying," "cheating," and "stealing" as "pure greed." John warns of national security threats to America's fresh water supply.

Renewable Rider Tom Weis meets with a group of farmers and ranchers at a local diner in Newport, Neb. Byron Steskal discusses contamination threats to local food crops and livestock. Lynda Buoy expresses her outrage at landowners being bullied by a foreign corporation. Terry Frisch talks about contamination threats to the Sandhills and the Ogallala Aquifer, calling for some "Nebraska common sense" to protect our water. Todd Cone says if the pipeline is built, he will erect a monument of shame listing the names of Obama administration officials and Nebraska senators who supported it so people in the future will know who was responsible for contaminating Nebraska's water.

Renewable Rider Tom Weis shows the Ogallala Aquifer exposed on the surface in the Sandhills region of Nebraska. He talks about how insane it would be to put a toxic tar sands pipeline underground in such a fragile area of the country.

Renewable Rider Tom Weis enjoys a quiet moment on the side of the road as the sun begins to set and the moon begins to rise. He shares a panoramic view of Nebraska's bucolic Sandhills.

Renewable Rider Tom Weis shares the beauty of Nebraska's Cedar River, which would be threatened by Keystone XL. He talks about how the shallow-banked, slow moving river evokes personal memories of the Florida Everglades, and how if a foreign corporation were plotting to ram a toxic tar sands pipeline through the Everglades, the country would be, figuratively speaking, "up in arms." He urges similar national concern for Nebraska's river treasures.

Renewable Rider Tom Weis hears organic farmer Robert Bernt talk about how Keystone XL would threaten his family's livelihood by contaminating Nebraska's Cedar River. Robert, who describes the Ogallala Aquifer as "one of the most precious natural resources that this country has," talks about his "long, scary, unbelievable fight" against Keystone XL and how TransCanada has divided Nebraskans with lies: they "buy their way, force their way, threaten eminent domain..." He provides a disturbing first-hand account of how he was "ridiculed," "humiliated" and "put down" by Nebraska legislators at a public hearing on Keystone XL, giving the unmistakable appearance of politicians on the take. He describes TransCanada representatives openly mocking a member of the public at that same hearing, calling them "ruthless" and "careless," with "no concern for their fellow man..."

Renewable Rider Tom Weis rocket trikes down a section of the "Cowboy Trail," a bike trail running 321 miles across northern Nebraska and following the old Chicago & Northwestern rail route. Navigating around what look to be prairie dog holes, he reflects on the day and ruminates about the need for more bike trails across America to provide people with more transportation choices.