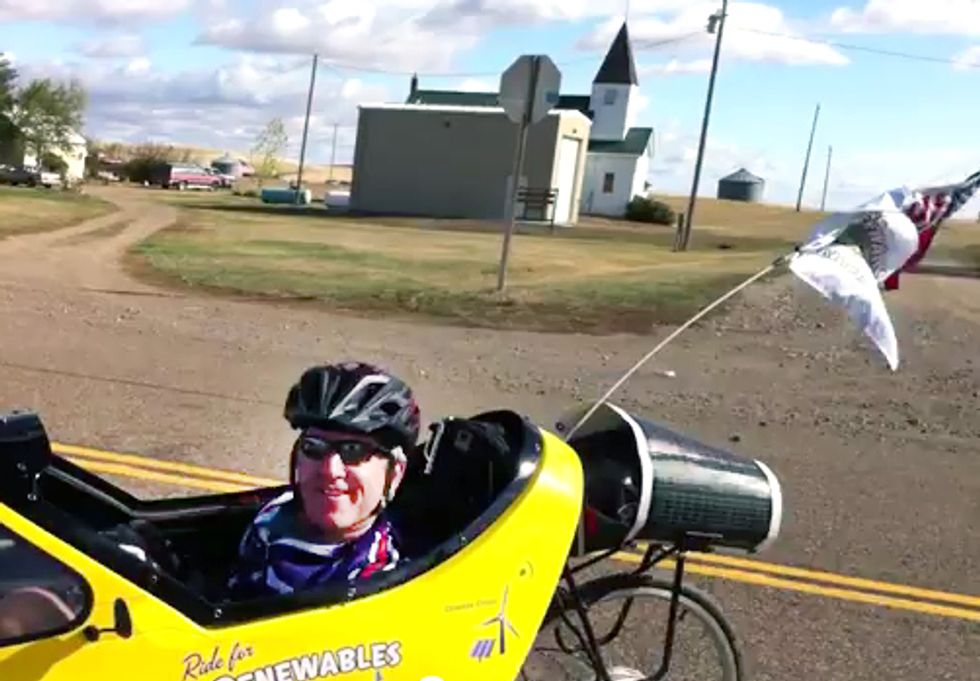 Harvard Ayers films Renewable Rider Tom Weis officially launching the Keystone XL "Tour of Resistance" in Loring, MT (pop. 11) on October 13, 2011. From Loring, he will ride 16 miles north to the U.S./Canada border before following the route of the proposed pipeline south to the Texas Gulf Coast.

Renewable Rider Tom Weis briefly crosses into Canada before pedaling south across the U.S./Canada border at the beginning of the "Ride for Renewables: No Tar Sands Oil On American Soil!"

Renewable Rider Tom Weis hears George Horse Capture, Jr., a spiritual leader of the Gros Ventre Tribe in Fort Belknap, MT, talk about American ingenuity and the need to protect Native and non-Native cultures from the Keystone XL tar sands pipeline. George blessed the event with a prayer, before Rose Main, Roberta Werk and Gertrude Werk set off on horseback for a solidarity ride with Weis.

Renewable Rider Tom Weis hears Ken Main of the White Clay Nation in Fort Belknap, MT state his opposition to the Keystone XL tar sands pipeline. Calling oil a "tool of greed" that is draining everybody, Ken encourages all races to work together in support of renewable energy solutions: "We're meant to be happy... We shouldn't have to struggle and pay all these oil companies just so that we can live."

Video Entry #7: Montana Mother to Obama: "You Are a Liar and a Coward."

Renewable Rider Tom Weis hears Ruth Marshall of Fort Belknap, MT call out President Obama on his "crimes against this earth." Saying, "people are getting sick, people are dying, they're suffering," she says we need to show some dignity and "stand up" to transnational corporations. Asking how much money it would take to give cancer to her baby, she says blocking Keystone XL may be one of Barack Obama's only chances for "redemption."

Video Entry #8: Tribal Member: "We Have the Owners Manual"

Renewable Rider Tom Weis listens to Jake Good Bear of the Mandan and Hidatsa Tribes of North Dakota share a prophecy of his Clan. Jake believes President Obama has a "sacred responsibility" to protect America, which he says the Natives used to call "ours," saying, "We know how to fix the problems in America because we have the owners manual."