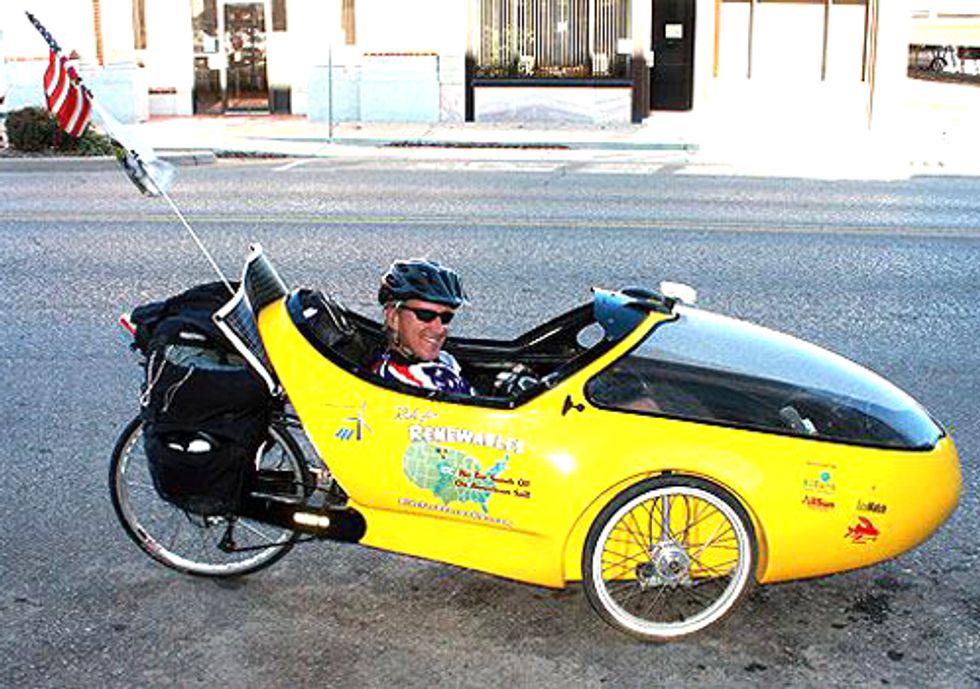 Renewable Rider Tom Weis hears Sicangu Lakota Hereditary Chief John Spotted Tail talk about the Keystone XL "Tour of Resistance" solidarity rides in Pine Ridge and Rosebud. John explains how the tar sands pipeline is a violation of treaty (Ft. Laramie Treaty of 1868) territory and why it must be fought.

Renewable Rider Tom Weis speaks with Ken Haukaas, Economic Development Advisor to the Chairman of the Rosebud Sioux Tribe, about impediments to achieving their green energy dream. Ken talks about how destructive overcrowding in the home, 80 percent unemployment, and record suicide rates are destroying the social fabric of his people. The Tribe is doing their part to develop local economies by investing in energy efficiency, solar pv, solar thermal, small wind, industrial-scale wind, geothermal, sustainable timber for homes, and greenhouses for locally grown produce, but needs the federal government to honor their trust responsibility by meeting them halfway.

Video Entry #33: Why He Joined the Keystone XL "Tour of Resistance"

Renewable Rider Tom Weis hears Shane Red Hawk of the Sicangu Lakota Nation talk about why he stepped up to join the Keystone XL "Tour of Resistance." Shane brought out his horses to ride in support of his 8-year old daughter and Mother Earth. He poetically describes how we need to overcome division and differences, saying, "There's so much beauty in our diversity."

Renewable Rider Tom Weis discovers the beautiful Keya Paha River shortly after crossing the South Dakota border into Nebraska. He talks about the importance of protecting this river—and others that most Americans have never heard of—from TransCanada's Keystone XL toxic tar sands pipeline.

Renewable Rider Tom Weis meets Alesiah Dart of Royal, Nebraska, who has a message for President Obama regarding Keystone XL: "He needs to stop giving the public lip service... he needs to just stop the TransCanada pipeline." She says, "I can live without oil, but I can't live without drinkable water."

Renewable Rider Tom Weis meets Thomas Higgins of O'Neill, Nebraska, who explains why young people should join the fight to stop Keystone XL. Thomas' grandpa is featured in the documentary, "Pipe Dreams," with the pipeline slated to cross his family's land. Thomas proclaims, "I'm hitting this head on... gotta get it stopped while you can...”