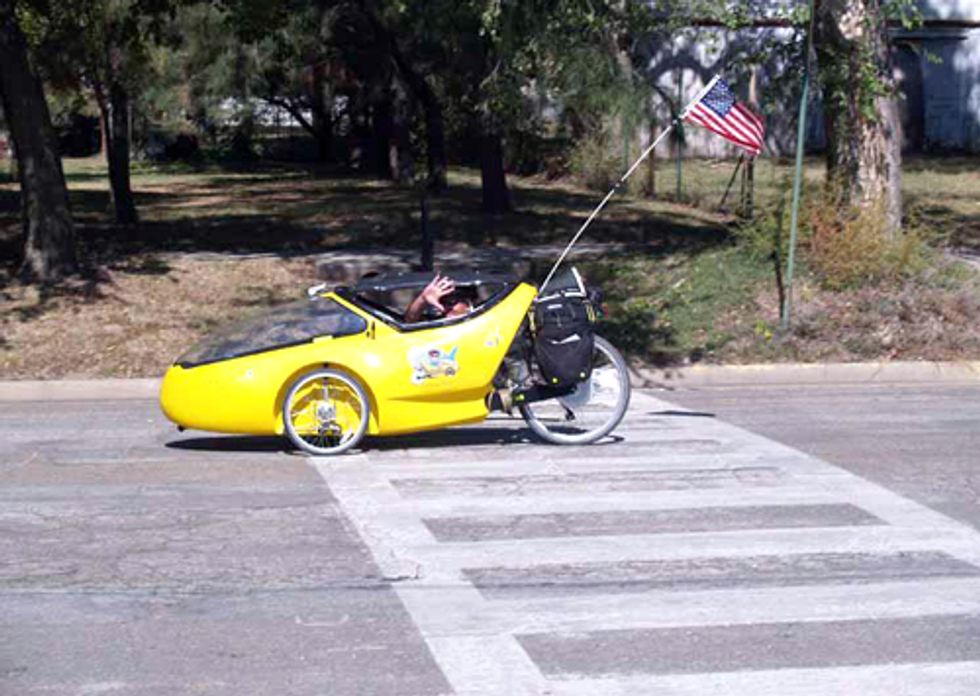 Renewable Rider Tom Weis and Ron Seifert are joined by local pipeline fighters for some street theater in front of TransCanada’s Houston, Texas headquarters, where they unwrap gift boxes containing 12 of the most egregious lies and abuses TransCanada is “gifting” the world through tar sands exploitation and Keystone XL. The gift boxes containing “TransCanada’s 12 Disgraces of Christmas” were later returned to the corporation’s headquarters.

Renewable Rider Tom Weis is given a special tour of struggling Port Arthur, Texas by Goldman Environmental Prize winner Hilton Kelley. Rolling past one boarded up building after another in a city with 14% unemployment, Hilton shares how the town was drained of its vitality over time and talks about the strong local desire for redevelopment through green technology. Calling clean air and clean water "a basic human right," he talks about the Community In-Power & Development Association's successful local efforts to push EPA to step up their enforcement of surrounding refineries and chemical companies. In a powerful history lesson, he explains how in the Deep South, railroad tracks were commonly used "to divide and segregate" African American communities from white communities, causing untold suffering. He shares a tragic story about a young woman living on the west side of Port Arthur who lost her baby during childbirth because a train blocked her access to the town's only hospitals, which were all on the east side of the tracks. To this day, there is only one underpass under the tracks and not a single health clinic on the west side.

Renewable Rider Tom Weis watches 2011 Goldman Environmental Prize Winner Hilton Kelley take the rocket trike for a spin. Hilton is founder and director of the Community In-Power & Development Association in Port Arthur, Texas, home to a disproportionate number of oil refineries and chemical plants, where children are suffering from acute respiratory illnesses. After giving the younger kids a turn, he shows us "how it's done" with his natural command of the specialized trike. A pumped up Hilton says, "Working together, we can get it done. Let's stop that pipeline!"

Renewable Rider Tom Weis meets with 2011 Goldman Environmental Prize winner Hilton Kelley on the final day of the Keystone XL "Tour of Resistance." Hilton is founder and director of the Community In-Power & Development Association in Port Arthur, Texas, home to a disproportionate number of oil refineries and chemical plants, where children are suffering from acute respiratory illnesses. Listen to Hilton recite his powerful poem: "My Toxic Reality."

Renewable Rider Tom Weis formally ends the 2,150-mile Keystone XL "Tour of Resistance" at a playground in the shadow of polluting oil refineries in West Port Arthur, Texas. He is greeted at the Carver Terrace housing project by 2011 Goldman Environmental Prize winner Hilton Kelley and other members of the community.

Renewable Rider Tom Weis concludes his 2,150-mile Keystone XL "Tour of Resistance" at the fence line community of West Port Arthur in the shadow of oil refineries spewing emissions. He is joined by Goldman Prize winner Hilton Kelley in denouncing the Keystone XL tar sands pipeline and in demanding that President Obama reject TransCanada's presidential permit without delay. Weis launched the tour 10 weeks ago at the U.S./Canada border and has pedaled the entire U.S. length of the proposed pipeline in his "rocket trike" in support of landowners and communities in six states fighting Keystone XL.