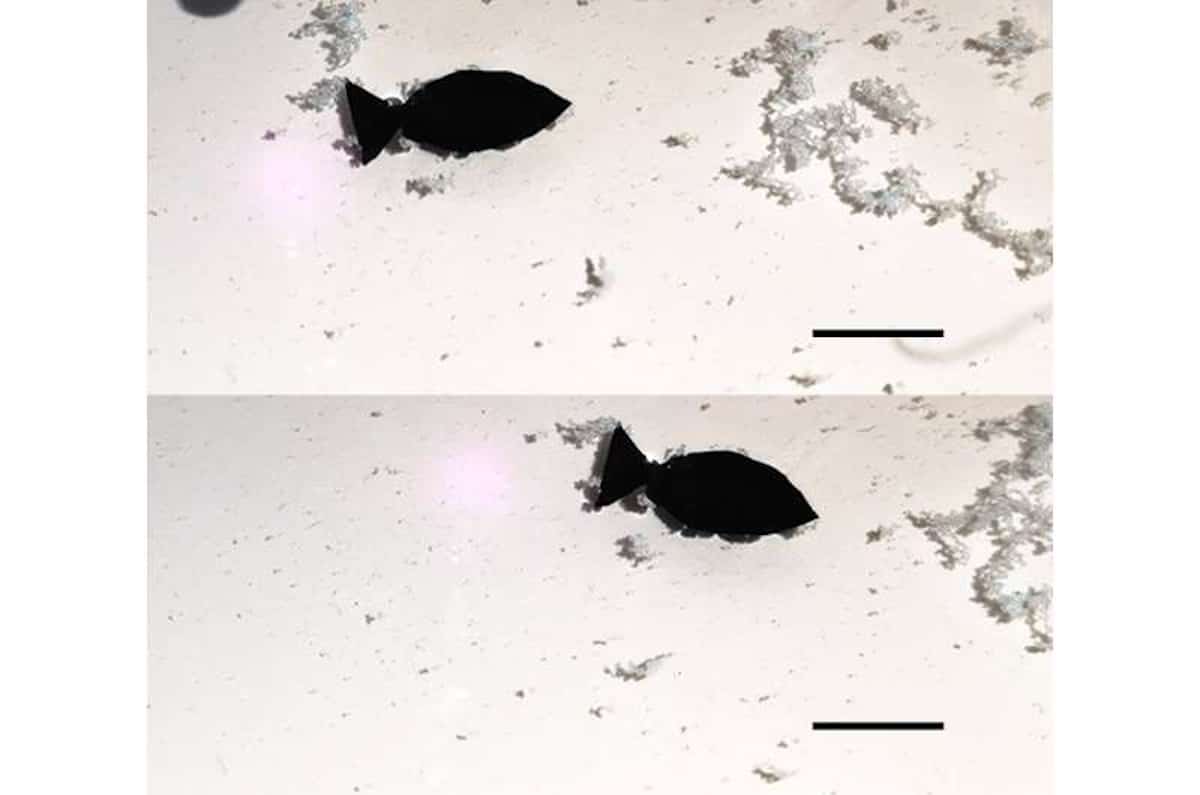 One of the dangers posed by microplastic pollution in the oceans is that fish and other marine life might eat it by mistake. But could a solution to the problem involve a robot designed to consume it on purpose?

Researchers at Sichuan University in China have developed a proof-of-concept for a robotic fish that can absorb microplastics through its body.

“It is of great significance to develop a robot to accurately collect and sample detrimental microplastic pollutants from the aquatic environment,” study co-author and Polymer Research Institute of Sichuan University researcher Yuyan Wang told The Guardian. “To the best of our knowledge, this is the first example of such soft robots.”

The new robotic fish was introduced in a paper published in Nano Letters on Wednesday. It is about half-an-inch long and can “swim” on its own with the help of light, according to an American Chemical Society press release published by Phys.org. An infrared laser shined on its tail causes the material to bend and flap, propelling it forward.

“The proof-of-concept robot is demonstrated to emphasize its maximum swimming speed of 2.67 body length per second, whose speed is comparable to that of plankton, representing the outperformance of most artificial soft robots,” the study authors wrote.

But what’s especially remarkable is what the robot can do while it’s swimming: gather nearby microplastics. The robot is made from materials that interact with the heavy metals, dyes and antibiotics attached to the microplastics, The Guardian explained. This, in turn, causes the microplastics to latch on to the fish’s body.

The robot’s material is partially inspired by nature, BBC Science Focus Magazine reported. Specifically, researchers took their cues from mother-of-pearl, the material that coats the inside of clam shells. Mother-of-pearl, or nacre, is built in layers. The scientists designed the robot the same way, something that made it flexible enough to move but strong enough to last. First, they made nanosheets of β-cyclodextrin molecules to sulfonated graphene, according to the American Chemical Society. These were then incorporated into polyurethane latex mixtures and the final material was made using layering.

Another unique property is that the robot is able to heal itself and perform at 89 percent of its original abilities, according to The Guardian.

More work needs to be done before the robots will actually be swimming around absorbing microplastics. Currently, it can only swim at the surface of the water, but the scientists hope to develop a version that can dive to greater depths.

Eventually, it could address some of the difficulties with getting microplastics out of the ocean, such as removing them from crevices, according to the American Chemical Society.