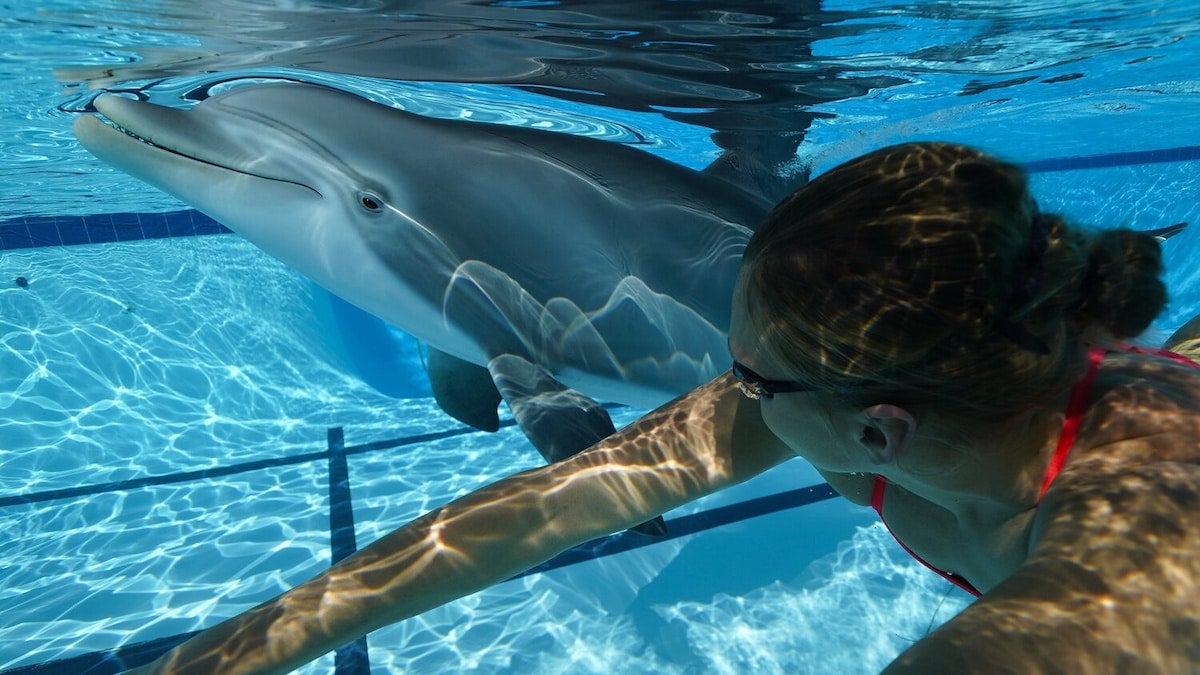 Swimming alongside an animatronic dolphin, a person learns about hydrodynamics. Edge Innovations

Edge Innovations, a New Zealand company that created of some of Hollywood’s most famous animatronic animals from movies like “Free Willy” and “Flipper,” has developed robot dolphins that look and act almost identical to their living counterparts. This is “bringing art and technology to life,” its website says.

Edge hopes its designs will be used in movies and aquatic theme parks instead of living animals. If the idea is expanded, swimmers could dive with life-like robot dolphins, great white sharks, or even Jurrasic-era marine reptiles, The Independent reported.

According to The Guardian, the first phase of the prototype’s development was sponsored by a Chinese development group that pledged in a statement to use the robotic animals instead of live ones in new aquariums being built.

Test audiences were unable to tell that the dolphin was not real, The Guardian reported. The model dolphin is controlled remotely by humans and can interact as a natural dolphin would.

“Everyone wants to know if using an animatronic dolphin is different than using a real dolphin, Roger Holzberg, Edge’s creative director of their animatronics program, told Aljazeera. “The truth is, in many ways, they’re the same.”

But, because it is a robot, Edge’s dolphin can also nod yes in response to a child, swim in a tiny tank in a mall or a chlorinated pool, and withstand very close contact that would be harmful to real animals, The Guardian reported.

“We realized that using animatronics instead of using live animals enabled us to create characters that truly were loveable, that could really deliver on the idea that we won’t hurt what we fall in love with,” Holzberg told Aljazeera.

Animatronics could also help bring back audiences turned off by aquatic parks using live animals and turn the industry around, reported Reuters.

“The marine park industry has had falling revenues for over a decade due to ethical concerns and the cost of live animals, yet the public hunger to learn about and experience these animals is still as strong as ever,” Holzberg told The Guardian. “We believe that it’s time to reimagine this industry and that this approach can be more humane, and more profitable at the same time.”

The cost would be around .3 million per animal, four times the amount of a natural dolphin.

“We have to persuade [potential clients] that it is a profitable business, even more profitable than live animals,” Li Wang, a business developer for Edge, told The Guardian. Wang pointed out that the robots do not require the same expensive caretaking or carefully monitored water temperatures as real dolphins do. Edge noted also that the robots will “outlive” their wild counterparts, who typically die within 20 years in captivity, the news report said. Wild dolphins live between 30 to 50 years.

According to Reuters, animal rights group PETA is in support and even held an event featuring the prototype dolphin.

PETA activist Katherine Sullivan told The Independent that the invention could help usher in the end of “cruel ‘swim with dolphins’ programs, for which young dolphins are traumatically abducted from their ocean homes and frantic mothers, sometimes illegally.”

“In 2020, cutting-edge technology allows us to experience nature without harming it,” PETA’s UK director, Elisa Allen, told The Guardian.