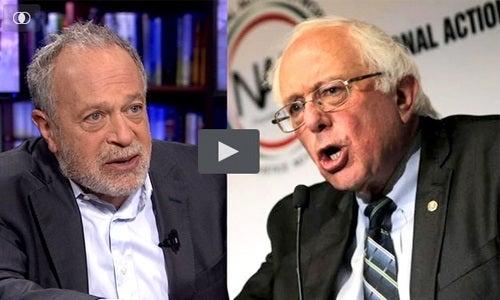 Robert Reich, who served as labor secretary under President Clinton, was on Democracy Now! yesterday to discuss the economic plans of Democratic front-runners Bernie Sanders and Hillary Clinton, and the economic plans of top GOP candidates Jeb Bush and Donald Trump, as well as his new book, “Saving Capitalism: For the Many, Not the Few.”

The book examines why the U.S. is now experiencing the greatest income inequality and wealth disparity in 80 years. Reich outs “the new monopolists,” debunks their “free-market” ideology and rhetoric and offers a pragmatic reform-filled path forward.

In discussing the candidates’ economic plans, he says Trump’s and Bush’s plans would both slash taxes for the “One Percent.” As for Clinton’s plan, Reich says it’s a “step in the right direction,” but “it’s not far enough.” But when it comes to Sanders’ plan, Reich says Sanders is “right.”

When co-host Juan González asks Reich to comment on Sanders’ surging popularity, he says, “I think he’s telling the truth, and I think people are responding with extraordinary enthusiasm, even many conservatives and Republicans I meet, to a truth teller.”

Find out what he has to say about Bernie Sanders and Hillary Clinton here: