Robert Redford Urges You to Join the Keystone XL Protest 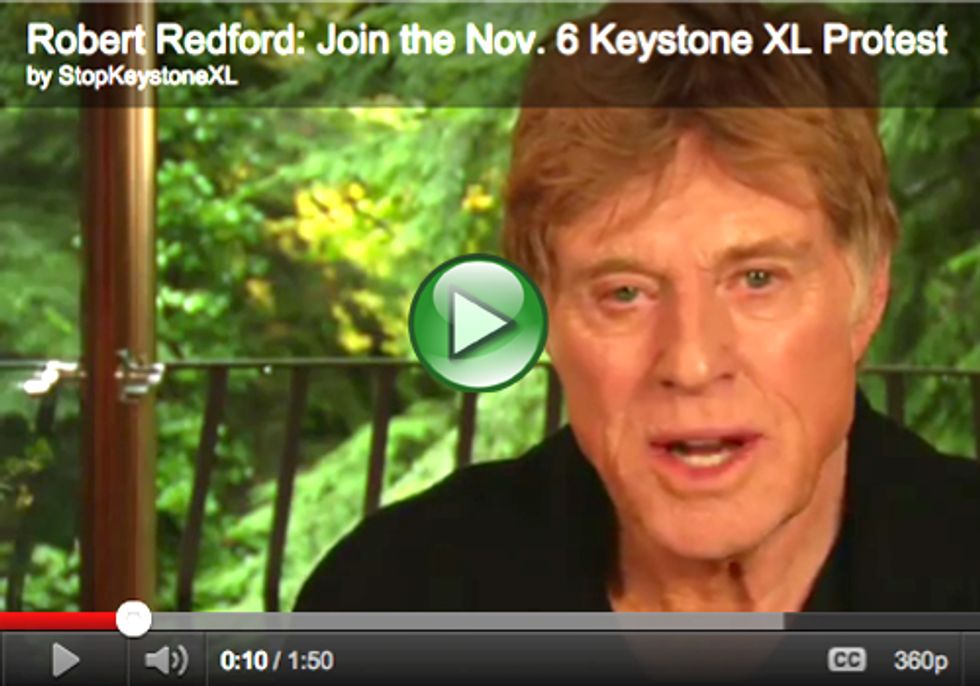 Actor Robert Redford released a video Oct. 31 inviting people to surround the White House this Nov. 6 to push President Barack Obama to deny a permit for the controversial Keystone XL pipeline. Thousands are expected to join the White House protest, scheduled exactly one year before the 2012 election.

In the video, Redford said, "On Nov. 6, thousands will gather outside the White House. Together, in a show of solidarity the crowd will encircle the People’s House. The crowd will show the president that if he stands up to big oil like he promised to do, he will have the people’s support. Now is the time for the president to show true leadership and help to move the country off of oil. We have better energy choices.”

Redford has emerged as an outspoken critic of the Keystone XL pipeline, a 1,700 mile project that would carry toxic tar sands oil from Canada to the Gulf of Mexico. Actors Mark Ruffalo and David Strathairn have also released videos endorsing the Nov. 6 demonstration. Actors Daryl Hannah and Omar Metwally were arrested with over 1,250 others at the White House this August during a two-week sit-in against the pipeline.

“This has become the biggest environmental flashpoint in many years,” said author Bill McKibben, who is spearheading protests against the pipeline with the group TarSandsAction.org. “We can’t literally occupy the White House, so the next best thing is to surround it.”

Over the last two months, pipeline protestors have followed the president to nearly every public campaign stop. Groups of 50-100 volunteers are also visiting Obama for America offices in key swing-states to tell the campaign they won’t donate or volunteer for the president unless he stops the pipeline. Major donors are also threatening to drop their support if the project goes through. The Nov. 6 protest is supported by nearly every major environmental group in the country, a number of unions, youth coalitions and indigenous leaders.

“We’ve looked on Google Maps and we think we’ll have enough people to completely surround the property,” said Jamie Henn, a spokesperson with TarSandsAction.org. “We’re not interested in levitating the White House, but we are going to see if we can resurrect the Barack Obama that ran in 2008 and pledged to end the tyranny of oil.”

President Obama responded to pipeline protestors in Denver last week, saying, “No decision’s been made and I know your deep concern about it, so we will address it.”

Robert Redford’s video can be found here, and was co-produced with the Natural Resource Defense Council.