Robert Redford Speaks on Climate Change and #OscarsSoWhite From Sundance 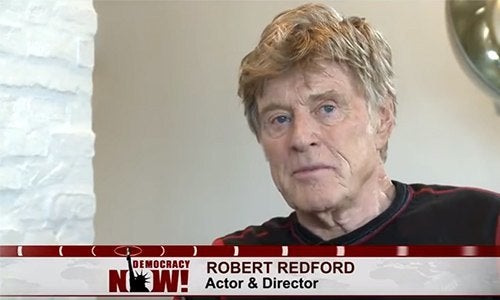 Actor and director Robert Redford founded the Sundance Film Festival which has helped independent voices develop their craft—in film, theater and music—and reach new audiences. Redford joins Democracy Now! in Park City, Utah to discuss the calls for boycotting the Oscars over its exclusion of people of color and his activism around climate change.

Amy Goodman: What are your thoughts?

Robert Redford: I agree with him 100 percent. I’ve obviously been involved, as climate change—being an environmentalist, which I am. And I’ve been more radicalized over time as I’ve seen the consequence of how the environment has been treated. So climate change is a big part of that. So, I got pretty involved with the subject, when I was asked to speak at the UN last—I think it was April.

Amy Goodman: And what do you think of the whole divestment movement across college campuses, the movement to divest, foundations to divest, corporations to divest from investment in oil, in coal, in fossil fuels overall? Do you endorse this?

Amy Goodman: Let me ask you about the Oscars and diversity. It’s the big discussion now, extremely significant. I just came from interviewing Dawn Porter who has a film here called Trapped about abortion providers in the South, also spoke to Stanley Nelson, who often features his films here, great civil rights documentarian.

Amy Goodman: What do you say about this? Do you endorse a boycott?

Robert Redford: No, I don’t endorse a boycott, because I don’t get involved in that discussion. I probably would, if I hadn’t started Sundance, because starting Sundance was my way of dealing with the issue, where the mainstream has a lot of control and whether it’s too many old white people or not. Because I was a member of the Academy, I’m not going to turn my back on it. I’ve been very fortunate to do a lot of films I’m proud of that are part of the Academy. So I decided I’m not going to get into that argument. That’s for others.

But what—all I can say is, look, in terms of diversity, which I really believe in, that’s why we started something called independent film festival. It’s about independence. And because diversity comes out of independence, I thought all we have to do is just show diversity—all colors, women, you know, promoting undervoiced people. Like in the early ’90s, we had people like Townsend and they came through and we promoted, we pushed those films, to say, look, black films, ethnic films, are important, so we’re going to put them out there, we’re going to make them part of our showcasing. Then it was—the next question was women. I said, well, it’s being dominated by men. And women are important and they’re beginning to emerge. You’re getting Lisa Cholodenko. You’re getting these women filmmakers that are stepping up—Nicole Holofcener. I thought, let’s put focus on them and say they’re important.

So that’s what Sundance’s history has been. We take areas that don’t get enough attention and we bring them in, and we give them a lot of attention here. But that’s what we do—in other words, in contrast to maybe what the Academy is doing. It’s not against the Academy. I’m not going to boycott. I’m just not going to get involved in it. We just do what we do.

Amy Goodman: Spike Lee says he’s not endorsing a boycott, but he’s just not going to go, because he doesn’t want to be a part of it.

Robert Redford: Well, it’s his choice and that’s fine. I mean, I probably won’t go, because I haven’t been invited. But I just focus on this, you know, but without denigrating that. To me, a lot of people—in the beginning, I received a lot of criticism, but it was—there’s a tendency to label, you know and subjugate things. And in the beginning, I was characterized as somebody that was against the mainstream, that’s starting something here in the mountains like an insurgent ready to come down and attack. I said, “No, no, it’s not that at all.” What it is, is taking another category that doesn’t get much voice, doesn’t get any attention and has a whole lot of people that could come into it and have a chance and build that up. And what that does, it extends the category of film. It’s not against the Academy. It’s just that it broadens the category. And I don’t think that’s ever come through to people.