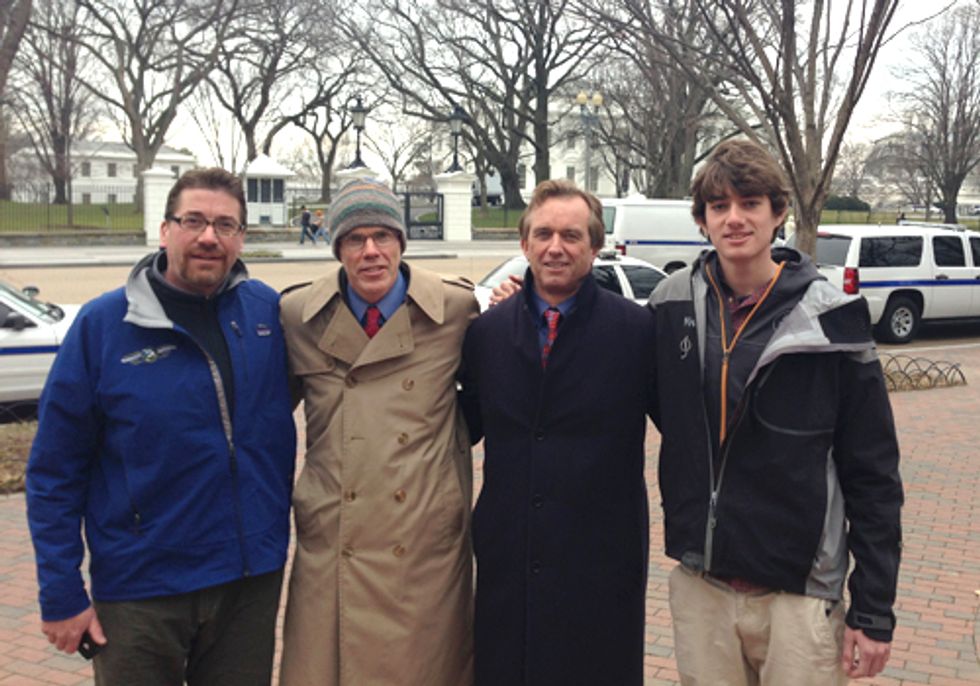 "It's unfortunate that civil disobedience is the only recourse against a catastrophic and criminal enterprise that will enrich a few while impoverishing the rest of humanity and threatening the future of civilization," said Robert F. Kennedy, Jr., president of Waterkeeper Alliance.

2012 was the hottest year on record, half the country is in severe drought, and superstorm Sandy just flooded the greatest city in the world—New York. A global crisis unfolds before our eyes and immediate action is required. President Obama has the executive authority to make a significant and immediate impact on carbon pollution, and he can begin by saying no to Big Oil by rejecting the Keystone XL tar sands pipeline.

Civil disobedience is the response of ordinary people to extraordinary injustices. Americans have righted the wrongs of our society—slavery, child labor, suffrage, segregation and inequality for gays and immigrant workers—with creative nonviolent resistance. Climate change threatens the health and security of all Americans, and action proportional to the problem is required—now.

The participants risking arrest have released the following letter to explain their collective action:

“We’re here today to show the depth of our resolve that President Obama take immediate, decisive action against climate change—to show that if the president leads, the vast majority of Americans will rally behind him. We’re not here today to protest the president, we are here to encourage and support him. We lived through horrors of Superstorm Sandy, the Midwest drought, wildfires, and the hottest year on record: we know in our bones that the time has come to do more than we have, and all that we can.

“The president can’t work miracles by himself. An obstructionist Congress stands in the way of progress and innovation. But President Obama has the executive authority and the mandate from the American people to stand up to the fossil fuel industry, and to reject the Keystone XL tar sands pipeline right now.

“And we’re here to show something else—that the movement for a clean energy revolution is a broad and powerful one. In 2011 we were moved by the 1,253 Americans who went jail to protest Keystone in the biggest civil disobedience action in many years in this country. Today we are 50 people at the White House representing millions of Americans in every state, in every community. Today we risk arrest because a global crisis unfolds before our eyes. We have the solutions to this climate crisis. We have a moral obligation to stand for immediate, bold action to solve climate disruption. We can do it, and we will.”

Stay tuned to EcoWatch for the latest developments on today's action.