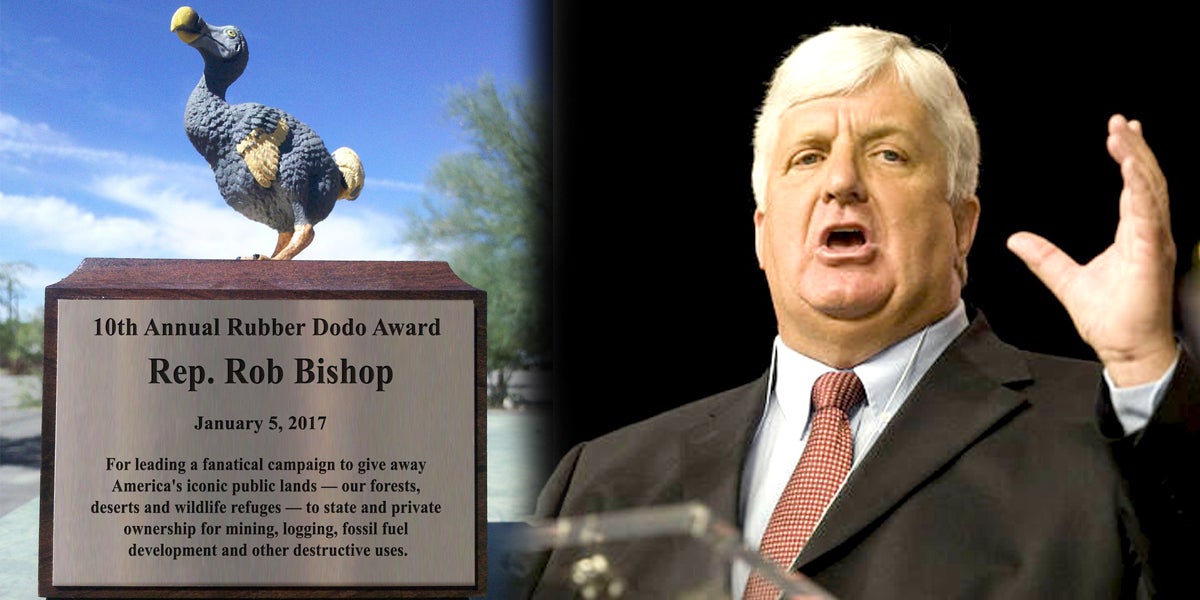 Today the Center for Biological Diversity gave Utah Congressman Rob Bishop its annual Rubber Dodo award. The statue is awarded each year to the person or group who has most aggressively sought to destroy America’s natural heritage or drive endangered species extinct. Bishop, a Republican, is chairman of the House Committee on Natural Resources.

“Rob Bishop has fanatically pursued an extremist agenda to give away America’s public lands and kill off its endangered species,” said Kierán Suckling, the Center for Biological Diversity executive director. “He is so far outside the mainstream that even Donald Trump has rebuked him for his positions.”

In the last few weeks alone, Bishop has called for repealing America’s strongest and most successful conservation law, the Endangered Species Act, pushed through a congressional rule requiring that bills seeking to give away federal public lands be treated as revenue neutral, regardless of their costs to federal and state governments, and advocated rescinding the recently created Bears Ears National Monument.

“Rob Bishop must go to sleep every night dreaming of ways to steal public lands away from the American people,” said Suckling. “These forests, deserts, rivers and streams are home to thousands of species of wildlife and are a source of inspiration and wonder to millions. But Bishop’s doing everything he can to turn them over to polluters, developers and oil companies.”

Bishop won the Rubber Dodo award after an online contest where tens of thousands of people were asked to choose between him and William Clay, deputy administrator of USDA’s Wildlife Services; former Volkswagen CEO Martin Winterkorn; and former Exxon CEO Lee Raymond.