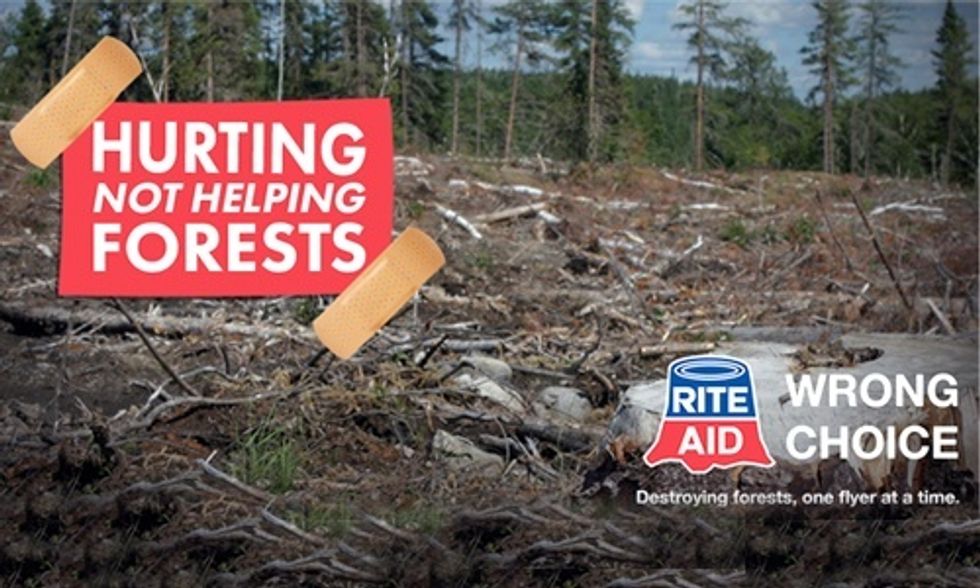 Earlier this year, we told you about how Rite Aid—the third-largest drugstore chain in the U.S.—has been making the wrong choice for forests by not managing where its paper comes from. Without a paper procurement policy, Rite Aid is exposed to controversies in its supply chain via the millions of pounds of paper it purchases for throwaway flyers.

Rite Aid has reason to scrutinize where its paper comes from. Resolute Forest Products, currently one of its major suppliers, is destroying endangered forests—including precious wildlife habitat—and has at times logged in Indigenous First Nation territories without consent. Despite repeated outreach to Rite Aid back in April, the company continues to ignore the signs and symptoms that it has a serious problem.

It’s time for Rite Aid to make the right choice for our forests. Here’s what’s at stake.

With roughly 4,600 stores in 31 states and DC, Rite Aid is a neighborhood staple for many Americans. Many of us have likely been inside a store and touched the very paper linked to unsustainable logging without even knowing.

While its advertised sales and discounts may be appealing, the paper the company uses for its sales flyers is currently bad news for the largest remaining intact forest in North America, the Boreal. And that means bad news for the climate, endangered wildlife and Indigenous First Nations communities.

Rite Aid’s sales flyers are printed on paper from Resolute Forest Products, a company that is logging in some of the last ancient forests in Canada still undisturbed by industrial development. This type of logging threatens wildlife like the woodland caribou and puts one of Earth’s largest carbon sinks at risk. At times, Resolute has even ignored the rights of First Nations communities that have inhabited the Boreal for countless generations and who are decision-makers in their territories.

So far, Rite Aid has continued to ignore where its paper comes from and turn a blind eye to the forest destruction behind its throwaway flyers. But it doesn’t have to be this way.

Public support has been an important force behind more companies abandoning practices that destroy our forests. In just the last few years, a growing number of large companies like Kimberly-Clark, Procter & Gamble, Hewlett-Packard and others have adopted policies that minimize their impact on endangered forests.

And now, even while Rite Aid still refuses to adopt a meaningful paper policy—a standard practice for a company of its size—we can again send the company a strong message. One of the largest drugstores in the United States cannot continue to ignore what the best science tells us: the Canadian Boreal forest is at risk and Rite Aid’s paper supplier, Resolute, is making a bad situation worse.

It’s Time for Rite Aid to Make the 'Rite' Choice

We know that Rite Aid can make the right choice for the Boreal by adopting a paper policy that avoids unsustainable sources and maximizes the use of recycled and Forest Stewardship Council (FSC)-certified paper. These sort of customer signals encourage the sustainable use of forests that are economically viable for local communities, respects the rights of First Nations and doesn’t threaten the existence of wildlife species like the Woodland Caribou.

Now, we’re calling on Rite Aid to do the ‘rite’ thing before the damage to endangered forests in the Boreal gets worse.

The Battle to Save the Endangered and Heavily Poached Pangolin