Report: ‘No Evidence That Fracking Can Operate Without Threatening Public Health’ 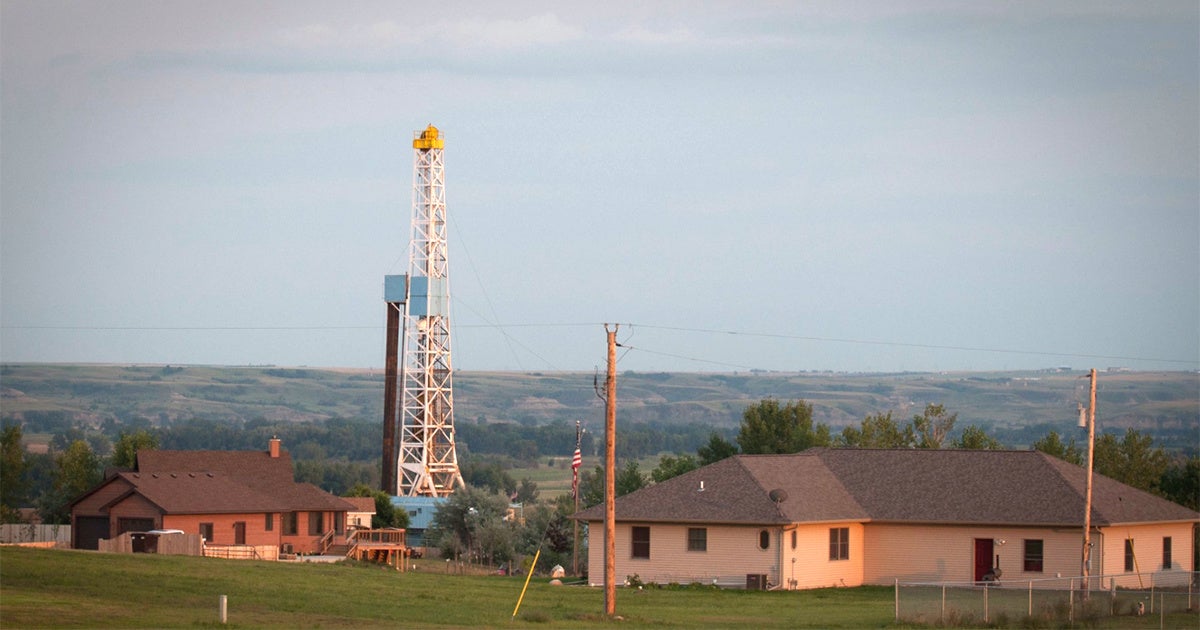 In 2010 when I first started writing about hydraulic fracturing — the process of blasting a cocktail of water and chemicals into shale to release trapped hydrocarbons — there were more questions than answers about environmental and public-health threats. That same year Josh Fox’s documentary Gasland, which featured tap water bursting into flames, grabbed the public’s attention. Suddenly the term fracking — little known outside the oil and gas industry — became common parlance.

In the following years I visited with people in frontline communities — those living in the gas patches and oilfields, along pipeline paths and beside compressor stations. Many were already woozy from the fumes or worried their drinking water was making them sick. When people asked me if they should leave their homes, it was hard to know what to say; there weren’t many peer-reviewed studies to understand how fracking was affecting public health.

Those days are over.

In June the nonprofits Physicians for Social Responsibility and Concerned Health Professionals of New York released the sixth edition of a compendium that summarizes more than 1,700 scientific reports, peer-reviewed studies and investigative journalism reports about the threats to the climate and public health from fracking.

The research has been piling up for years, and the verdict is clear, the authors conclude: Fracking isn’t safe, and heaps of regulations won’t help (not that they’re coming, anyway).

“Across a wide range of parameters, from air and water pollution to radioactivity to social disruption to greenhouse gas emissions, the data continue to reveal a plethora of recurring problems and harms that cannot be sufficiently averted through regulatory frameworks,” write the eight public health professionals, mostly doctors and scientists, who compiled the compendium. “There is no evidence that fracking can operate without threatening public health directly and without imperiling climate stability upon which public health depends.”

The research collected and summarized is wide-ranging and includes the harms not just from drilling and fracking, but the long tail of the process, including compressor stations and pipelines, silica sand mining, natural-gas storage, natural-gas power plants, and the manufacturing and transport of liquefied natural gas.

Dr. Sandra Steingraber, a biologist, author and distinguished scholar in residence at Ithaca College, is one of the compendium’s co-authors. She helped lead an independent investigation into the scientific research on the health risks from fracking that was a precursor to the current compendium. Those efforts drove public engagement on the issue and eventually led to a ban on fracking in her home state of New York in 2014.

She said this latest collection of research reveals some significant and noteworthy trends.

“There’s really definitive evidence now that methane leaks at every stage of the fracking process” from drilling to storage, she said. And that’s contributing to a surge in methane, a potent greenhouse gas, in the atmosphere.

But methane isn’t just a climate danger. It’s also a contributor to smog, otherwise known as ground-level ozone, which is linked to strokes, heart attacks, asthma and preterm births. 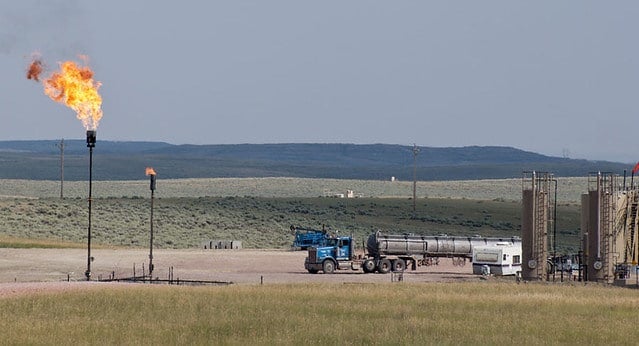 Gas being flared at a drilling site in Powder River Basin, Wyoming.

Another area where the science is settled is the earthquakes caused by the injection of fracking wastewater underground, she said.

“We know without a doubt that fracking is linked to earthquakes that occur over longer periods of time and wider geographic area than previously thought,” she said. “That’s because these slippery chemicals that they’ve added to fracking fluid decrease friction while fracking, and they don’t lose that property when re-injected down into the earth with wastewater.”

The compendium also includes a section on two new topics not covered in previous editions — environmental justice and wildlife.

First, studies have shown that fracking infrastructure is disproportionately sited in nonwhite, indigenous or low-income communities. “Whether it’s practiced in urban areas like Los Angeles where fracking infrastructure clearly targets poor nonwhite communities or in rural areas of Ohio and Pennsylvania where it’s targeted at poor whites — those patterns hold up over and over again,” she said.

There’s also mounting evidence about harms to wildlife from various elements of the process, including toxic water, habitat destruction, light and noise pollution. For example, infrastructure like compressor stations caused populations of grassland songbirds in Canada to decline. Water fleas, a key part of the aquatic food web, are imperiled by small amounts of fracking fluid in waterways.

And that’s just the tip of the iceberg: At more than 350 pages with 1,400 footnotes linking to pertinent research, there’s a lot to uncover in the compendium. Here are a few of the findings:

Over the years the compendium has become a critical resource in the fight against fracking and helped to shed some light on an industry that, thanks to regulatory loopholes, has been allowed to operate in secrecy.

Steingraber said there are more than enough scientific findings to conclude that fracking isn’t safe — indeed, that’s what officials in New York determined five years ago. But the industry has significant political clout that science alone can’t counter. 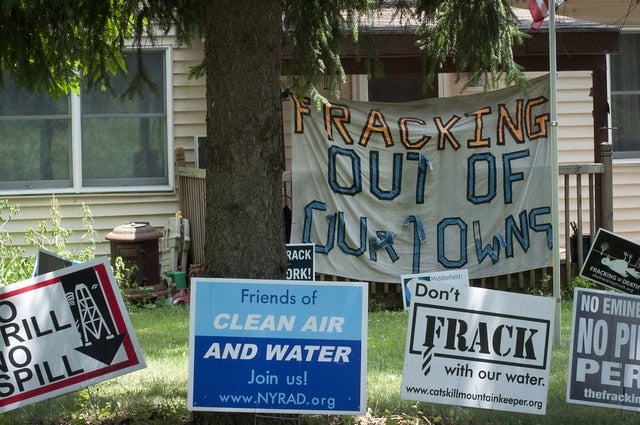 Residents of Dimock, Pennsylvania in the Marcellus Shale took a stand against fracking.

“It seems to be required now that science be carried by a powerful social movement,” she said. But she’s seen firsthand how strong those movements can be. When fracking came to her doorstep in New York, she and other health professionals translated the science into plain English and brought it to frontline communities so people would know what they were facing.

“When people are informed by science, and then empowered to have an opinion, they’re moved to take part in the public process,” she said. A surge of tens of thousands of public comments helped move New York to ban fracking, and requests for information about health impacts from fracking from all over the world has led Steingraber and her colleagues to keep updating the compendium year after year.

“This is a completely unfunded project — we’re just doing this in the middle of the night and on weekends,” she said. “But I believe there is value in having a group of independent scientists doing this work.”