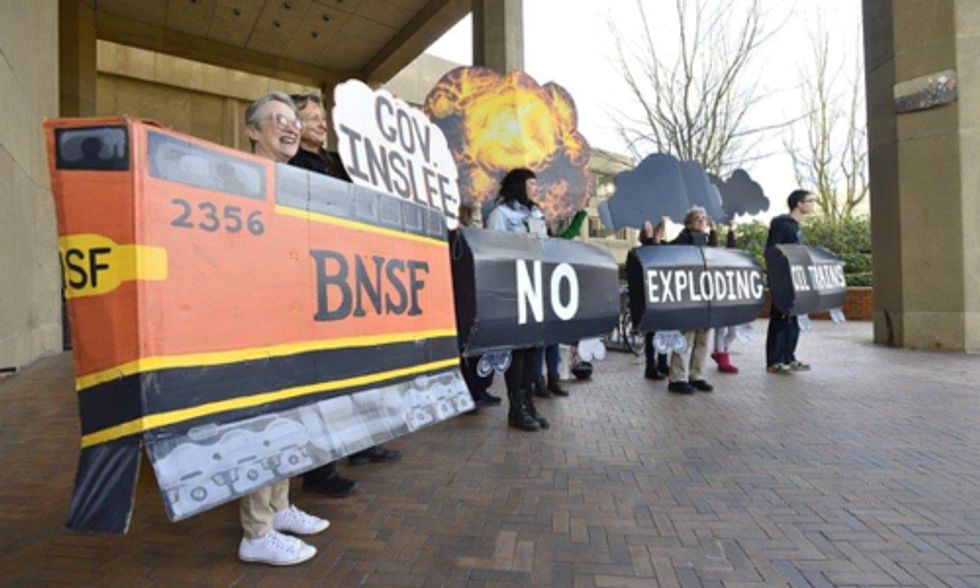 Rising Tide Seattle created a ruckus at Gov. Inslee’s (D-WA) speech at the University of Washington on Tuesday.

With a dozen protestors outside, holding signs, an extended replica of oil trains and a large image of an explosion, the group brought attention to the problem of fossil fuel infrastructure and export terminals through the coastal Northwest.

Rising Tiders sat in the front row during Inslee’s talk, wearing white t-shirts that spelled out “No Oil Trains,” making sure that the message was loud and clear through the governor’s talk.

“Rising Tide Seattle confronted Governor Inslee at his University of Washington climate talk today. There are at least nine fossil fuel terminals waiting for permits on your desk Governor Inslee. Until you reject them you can’t call yourself a climate leader!”

Exploding oil trains have caused environmental disasters in North Dakota, Alabama and Quebec, adding fuel terminals would not only increase risks of explosions in the Pacific Northwest, it would increase expansion of oil production in the Bakken shale and the Alberta tar sands—the world’s most destructive project.

Fracking Exports Will Leave Communities in the Dark