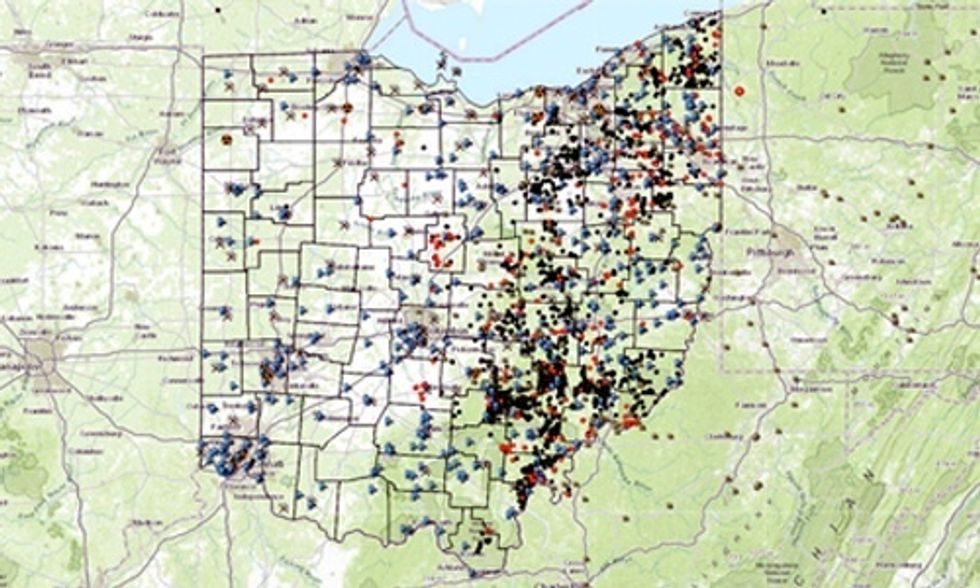 Ohio has become a major wastewater dump for the fracking industry, sparking fears of groundwater contamination and concerns that injection of wastewater into wells could trigger the same earthquakes currently rattling frack-happy Oklahoma.

The Columbus Dispatch cited new numbers from the Ohio Department of Natural Resources (ODNR) revealing that wastewater pumped into Ohio's underground wells increased by more than 15 percent last year. In all, Ohio took in nearly 29 million barrels of fracking wastewater in 2015—4 million more barrels than in 2014, the Dispatch reported.

Thirteen million barrels of this wastewater came from states such as Pennsylvania and West Virginia that have strict rules against wastewater injection. About 55 percent of the fracking wastewater that ends up in Ohio injection wells came from the state itself, the Dispatch said.

Ohio, in fact, can be singled out for being the worst in the nation for its fracking waste disposal practices. The Government Accountability Office (GAO) released a report in September 2014 showing that Ohio was the only state among the eight it studied that allows waste fluids from oil and gas wells to be disposed of without disclosure of the chemicals it contains. Case in point, Pennsylvania, which accounts for nearly 40 percent of U.S. shale gas production, has fewer than a dozen injection wells to dispose of fracking waste underground whereas neighboring Ohio has hundreds.

Ohio Class II Injection Well & Fracking Waste Network. This map was made and is actively updated by the FracTracker Alliance. Click on the map for more information.

It's no surprise then that Ohio's injection well disposal industry is a lucrative business, producing nearly $2 million in fees for ODNR in 2013, according to Midwest Energy News.

An Environment America Research & Policy Center report found that fracking operations produced 280 billion gallons of such wastewater in a single year. Studies have shown that fracking wastewater contains a toxic slurry of chemicals, including at least six—barium, chromium, copper, mercury, arsenic and antimony—that would make the water unsafe to drink. Fracking wastewater, however, is not considered hazardous by the federal government.

During the fracking process, millions of gallons of of water, sand and chemicals are blasted into shale formations to unlock oil and natural gas. While fracking itself can induce earthquakes—such as the 4.6-magnitude earthquake that struck northeast British Columbia last summer—the disposal of fracking wastewater into underground wells has led to the alarming spate of tremors felt in several states, scientists have concluded.

Eight states in particular—Oklahoma, Texas, Ohio, Alabama, Arkansas, Colorado, Kansas and New Mexico—are in danger from an increased number of induced quakes primarily from the injection of the fracking wastewater into wells, the U.S. Geological Survey said in an April 2015 report.

The Dispatch reported that exact numbers on drilling patterns and oil and gas production in Ohio last year are not yet available. Still, the report noted that Ohio residents are worried that the activity could lead to groundwater contamination and expose the state to a surge in damaging earthquakes.

“Something’s got to give,” Teresa Mills, program director for the Buckeye Forest Council, told the Dispatch. “Athens County, Coshocton, Guernsey (counties)—these are environmental-justice communities, and we have to stop burdening them.”

In March 2014, the ODNR ordered Texas-based energy company Hilcorp to halt all fracking operations in Mahoning County after at least four earthquakes shook the area. A magnitude 3.0 earthquake at 2:26 a.m. and a magnitude 2.6 at 11:45 a.m. on March 10 were among those reported in Poland Township just south of Youngstown near a fracking site with seven drilling wells, according to the U.S. Geological Survey.

“It’s an area which (before 2011) had no history of earthquakes,” John Armbruster, a retired Columbia University geology professor, told the Columbus Dispatch then. “It looks very, very suspicious.”

Fracking has had a contentious and controversial history in the Buckeye State. In 2011, Ohio Gov. John Kasich signed a law passed by Ohio's Republican-controlled legislature allowing drilling companies to frack in state parks.

Kasich then reversed his position on fracking public lands in response to public outcry about the events surrounding recently released information about the state’s collusion with the oil and gas industry to conduct a shady pro-fracking PR campaign.

Coupled with that, a 2014 lawsuit against the governor and the ODNR claimed that that they illegally approved 23 facilities to handle the handling, storage, processing and recycling of fracking waste, bypassing the official rulemaking process.