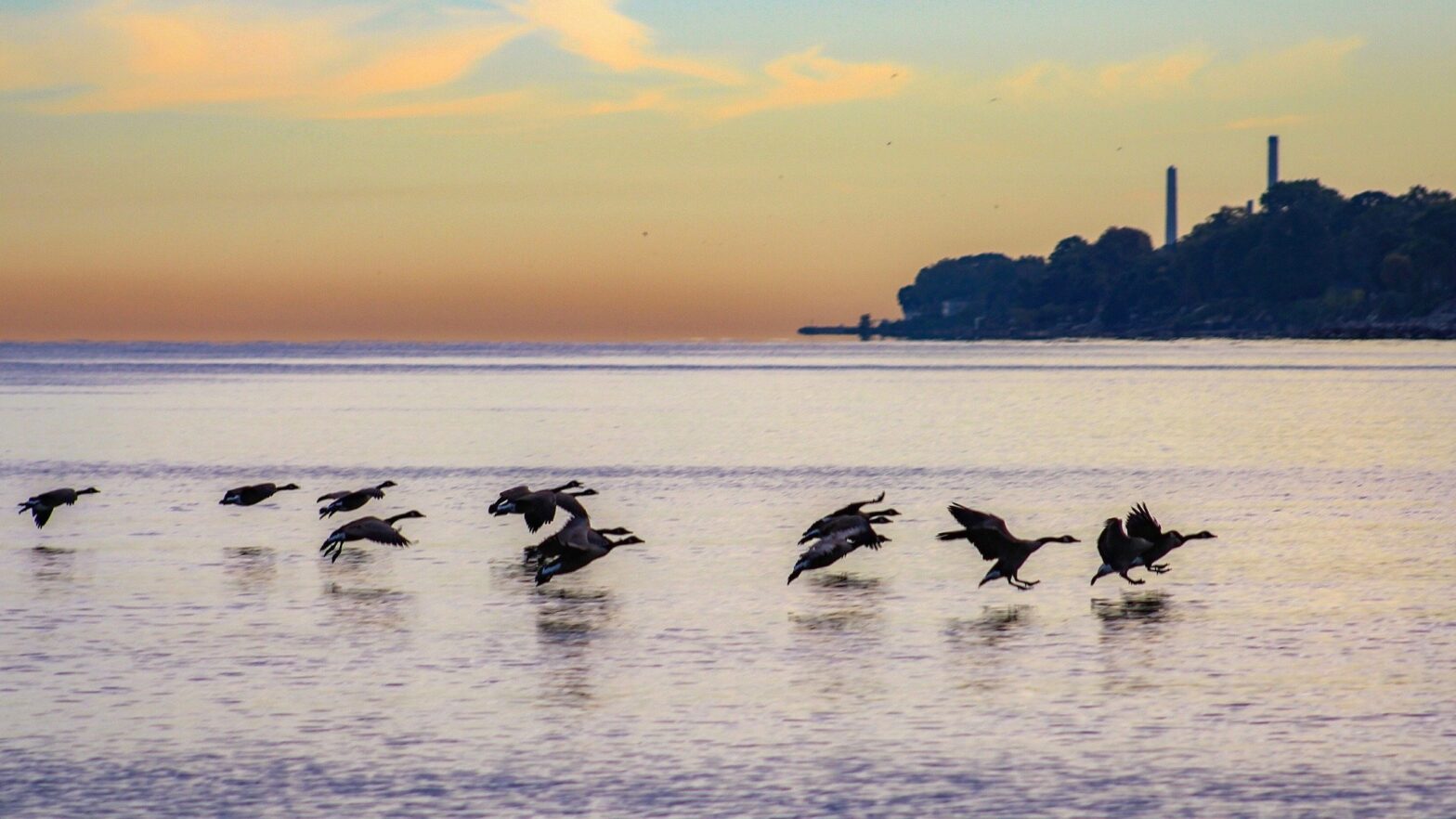 Birds fly over Lake Erie. Residents of Toledo, a city on the shores of heavily polluted Lake Erie in the U.S. state of Ohio, voted to give the lake rights of nature last year. A local farm responded by filing a lawsuit claiming this violated the rights of agribusinesses. Jessica Hetrick / EyeEm / Getty Images

“We see ourselves not as an owner of wild rice but a symbiotic partner and a parallel entity from the Creator,” says Frank Bibeau, a lawyer from the Anishinaabe indigenous group in the U.S. and Canada.

Harvesters use flailing sticks to beat the wild rice — or manoomin, by its Anishinaabe name — and release grain into the air. “A good portion of the rice gets sent out in all directions to reseed the rice. Maybe half of it or a little more falls into the canoe for food,” Bibeau explains. “So we are part of the natural reseeding process ourselves.”

Seeking ways to block an oil pipeline through the Great Lakes ecosystem where his people and the rice have thrived together for generations, Bibeau designed legislation granting wild rice its own rights under tribal law.

According to the Community Environmental Legal Defense Fund (CELDF) that advised Bibeau on the legislation, manoomin is the first plant in the world to be granted rights. But it joins a growing number of rivers, forests, and characterizations of nature as a whole, that are protected by “rights of nature” laws around the world.

“Conventional environmental laws are really about regulating how we use nature,” says Mari Margil of CELDF. “The consequences of that have been so devastating that people in different parts of the world are saying we need to make a fundamental shift in our relationship with nature.”

With the idea that indigenous peoples are the most reliable custodians of our planet now repeated by politicians and environmental NGOs alike, giving nature rights suggests a way their approaches might be adopted by broader society.

It was in this spirit that Ecuador became the first country to enshrine the rights of nature — personified as Pachamama, the Andean earth goddess — in its constitution, in 2008.

Bolivia and Uganda have since enshrined the rights of nature in their constitutions, and an amendment was recently proposed for Sweden to do the same.

A Healthier Relationship With Nature?

Asserting that nature has intrinsic rights isn’t just a legal tool to prosecute polluters. It also challenges the “ecosystem services” approach to environmental protection that costs up the economic value of clean air, water and biodiversity — and even the concept of conservation areas.

As a national park, land surrounding the Whanganui River in New Zealand was off limits to the Iwi Maori tribe who had hunted and fished there sustainably for generations. In 2017, the dispute was resolved by making the river a person in its own right, owned by neither the state nor the tribe.

Maori law professor Jacinta Ruru sees it as a major breakthrough that New Zealand law now reflects the relationship the country’s indigenous people have with the environment — one that sees no division between what’s good for people and the planet.

Ruru says it’s too soon to judge the ecological impact of the Whanganui River’s change of status. And it remains to be seen if the Rights of Manoomin will be any match for the interests invested in the pipeline.

In Ecuador’s case, the new constitution has been used to block plantations and road-building that threatened forest, but it hasn’t proved enough to transform an entire system geared toward economic development; cases brought by indigenous activists have ended in Pachamama’s rights being trumped by those of businesses.

Critics also point out that making rivers and forests honorary people owes less to any indigenous deification of nature than to the Western rights discourse.

“There is a strategic relationship between indigenous communities and the rights of nature,” says Mihnea Tanasescu, a political scientist who authored a book on the subject in Ecuador, “but there is not necessarily an intrinsic philosophical affinity, because rights are a very Western legal category.”

Michelle Maloney of the Australian Earth Laws Alliance is developing legislation based on Aboriginal traditions that ground all law in relationships to the land. She says nature rights are a way for different cultural perspectives to work together.

“The legal personhood argument is getting traction around the world,” she says, because “the average Westerner-lawyer type understands it as a construct.”

The Ganges and Yamuna rivers now have legal personhood, as do each of Bangladesh’s hundreds of rivers. The Colombian judiciary, meanwhile, has repeatedly ruled that the rights of rivers of forests had been violated by pollution and logging.

These laws draw on specific local indigenous ideas. Yet a single U.S.-based organization, CELDF, has been instrumental in drafting nature rights legislation around the world.

CELDF worked on the world’s first rights of nature law — a local ordinance to stop toxic waste dumping in Pennsylvania — in 2006, and Margil says close to 40 nature rights bills have now been passed in the U.S. Many are brought by activists with no indigenous ties frustrated by a legal system that doesn’t recognize damage to nature as a crime until it affects human health or livelihoods.

Last year, one such case made international headlines. Residents of Toledo, a city on the shores of heavily polluted Lake Erie in the U.S. state of Ohio, voted to give the lake rights. A local farm responded by filing a lawsuit claiming this violated the rights of agribusinesses.

Since the bill was more or less quashed by Ohio state legislature, activists are fighting to revive it from legal limbo. But if nothing else, their struggle has drawn attention to the priorities of a legal system that treats nature as property but corporations as legal persons.

“Often people just don’t think about these invisible systems that govern our world,” Maloney says. “So as a starting point — and a conversation- and discourse-changer — the rights of nature is very powerful.”