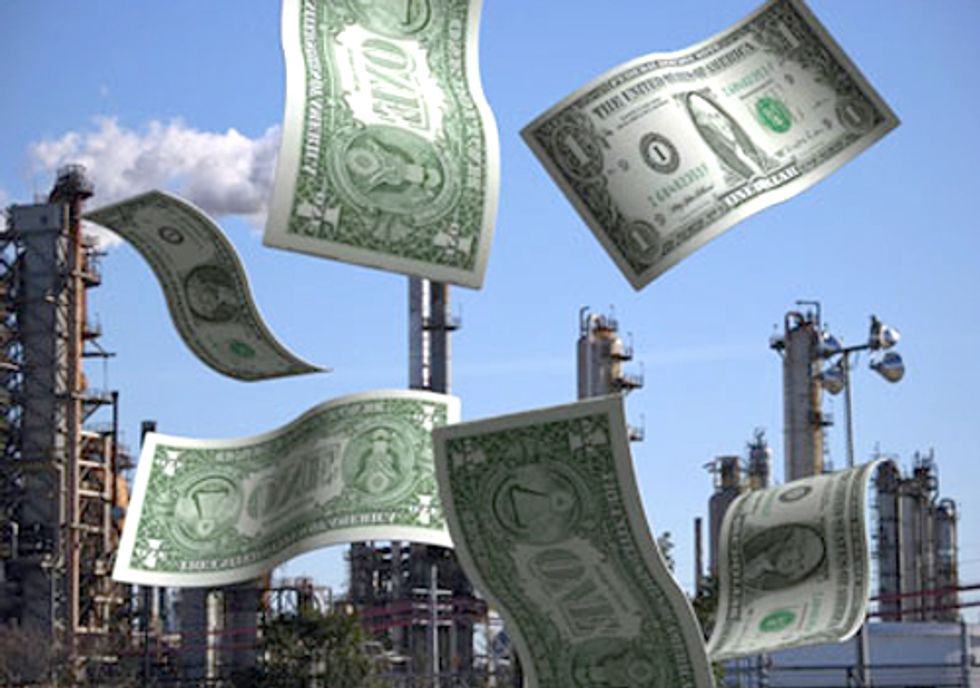 Echoing talking points from the American Petroleum Institute (API), right-wing media are denying that the tax incentives oil companies receive are a subsidy. However, experts say that such incentives—legally categorized as tax expenditures—have effects similar to more direct cash transfers from the government, and tax expenditures make up a major part of the government's energy policy.

Joint Committee On Taxation Lists Oil Industry-Specific Tax Incentives As Tax Expenditures. The Congressional Joint Committee on Taxation notes that tax expenditures are defined by law as "revenue losses attributable to provisions of the Federal tax laws which allow a special exclusion, exemption, or deduction from gross income or which provide a special credit, a preferential rate of tax, or a deferral of tax liability." The Committee lists several tax expenditures specific to the oil and gas industry, such as incentives for pipelines, refineries, oil exploration and oil recovery. [Joint Committee on Taxation, 12/15/10]

Tax expenditures operate essentially like direct expenditures, even though they appear as tax breaks. They benefit hundreds of different types of activities and individuals and currently account for one-fourth to one-third of all benefits and subsidies granted to the public. [Tax Policy Center, 7/17/09]

Tax expenditures have a similar effect on the federal deficit as government spending. They can also have effects on recipients that are similar to grants or other types of subsidies. For instance, if the government wants to encourage people to buy solar panels for their homes, it could send checks to those who bought panels or offer tax breaks after the panels have been purchased. [SubsidyScope.org, accessed 4/3/12]

To reiterate, a tax expenditure is a government spending program that delivers subsidies through the tax code via special tax credits, deductions, exclusions, exemptions, and preferential rates. This reduction in taxes is the amount of the subsidy provided to that individual or company. In the energy sector, this means specific companies receive credits for investing in renewable energy, deductions related to oil exploration, and credits for production of alternative transportation fuels, among other benefits. [Center for American Progress, April 2010]

A. An oil company pays $1 million a year in taxes. Congress gives it a yearly cash grant of $200,000 to explore for new wells.

B. An oil company pays $1 million a year in taxes. Congress gives it a yearly tax break of $200,000 for exploration expenses.

We continue to hear about the need to eliminate "subsidies" for the industry. The industry receives not ONE subsidy, and it is one of the largest contributors of revenue to our government of any industry in America. The oil and natural gas industry doesn't get the guaranteed loans made famous by the Solyndra affair, for example. It takes tax deductions the same or similar to what all other American companies get to recover their costs of doing business. [American Petroleum Institute, 2/23/12]

We're not doing that. We're allowing them to keep more of their profits. Profit is a good thing. Profit is capitalism. Profit creates jobs, creates incentives for the oil companies to hire more people, to buy more equipment and guess what, to drill more money. So let them keep their $3 or $4 billion. [Fox Business, Cavuto, 3/29/12]

Fox's Stuart Varney: Obama "Is Confusing Everybody With His Use Of The Word 'Subsidy.'" From Fox & Friends:

I mean, do you get a payment from the Treasury when you have a break on your mortgage, on your interest? Of course you don't. He is confusing everybody with his use of the word "subsidy." [Fox News, Fox & Friends, 3/30/12]

Limbaugh: By the way, they don't get subsidized. Folks, this is another blatant lie. It is a blatant lie about tax subsidies. Big Oil does not get subsidized. They have tax breaks like many other industries do, just like you have a home mortgage interest deduction. And the tax breaks they have are to incentivize their production and exploration for oil. Their tax breaks are not to cause you to pay higher gas prices, their tax breaks are there to facilitate more supply and thus cheaper prices. [Premiere Radio Networks, The Rush Limbaugh Show, 3/29/12]

Fox's Shannon Bream: "There Is A Difference" Between Oil Company Tax Breaks And Subsidies. From Fox News' Special Report:

Bream (guest host): And to be clear, the vote in the Senate today was about a bill from Senator Menendez and it would have cut tax breaks, which the White House refers to as subsidies. But really, there is a difference, Juan.

Juan Williams (Fox News contributor): There is a difference. But you know, the tax breaks are meant to incentivize oil production. And the oil companies make this point and that they need these and say that prices would go up without these incentives. Nonetheless, the money comes out of my pocket, your pocket, the American taxpayers' money, and that's why the White House calls them subsidies.

Bream: But is it coming out of the oil companies' pockets? I mean, it's less money that they're paying in to the tax base.

Williams: Correct. Well, it's a deduction, a loophole, however you want to describe it. [Fox News, Special Report, 3/29/12]

Tax Incentives Make Up Much Of The Government's Energy Policy

For several decades, policies in the federal budget affecting energy production have largely been exercised through the Internal Revenue Code (Tax Code or IRC). Recently, in order to inject funds more quickly into a weak economy, ARRA made more prominent use of direct spending. This was done with the intention of providing capital to investors with little or no taxable income to offset during the financial crisis. [Energy Information Administration, July 2011]

The federal government heavily relies on the tax code to implement policy in the energy sector. In fiscal year 2009, the estimated revenue loss in the sector from tax expenditures totaled nearly $6.3 billion. Tax expenditures are government revenue losses resulting from provisions in the tax code that allow a taxpayer or business to reduce their tax burden by taking certain deductions, exemptions, exclusions, preferential rates, deferrals or credits. [SubsidyScope.org, accessed 4/3/12]

There are a number of tax incentives currently available for energy production using fossil fuels. They can be broadly categorized as either enhancing capital cost recovery or subsidizing extraction of high-cost fossil fuels. Between 2010 and 2014, the total cost of tax expenditures related to fossil fuels is estimated to be $12.2 billion. [Congressional Research Service, 4/14/11]

During World War I, U.S. taxpayers provided the oil and gas industry with its first federal tax break. Over the decades, more lucrative tax breaks have been added. The latest major installment came with the passage of the 2005 Energy Policy Act, which included another $2.6 billion in subsidies for oil & gas companies. But it hasn't stopped there. As recently as December of 2011, oil and gas companies received more subsidies. Each year the oil and gas industry takes advantage of tax breaks and other subsidies worth billions of dollars. In all, oil and gas companies are expected to receive more than $78 billion in industry specific and general business subsidies over the next five years. [Taxpayers For Common Sense, May 2011, emphasis in original]