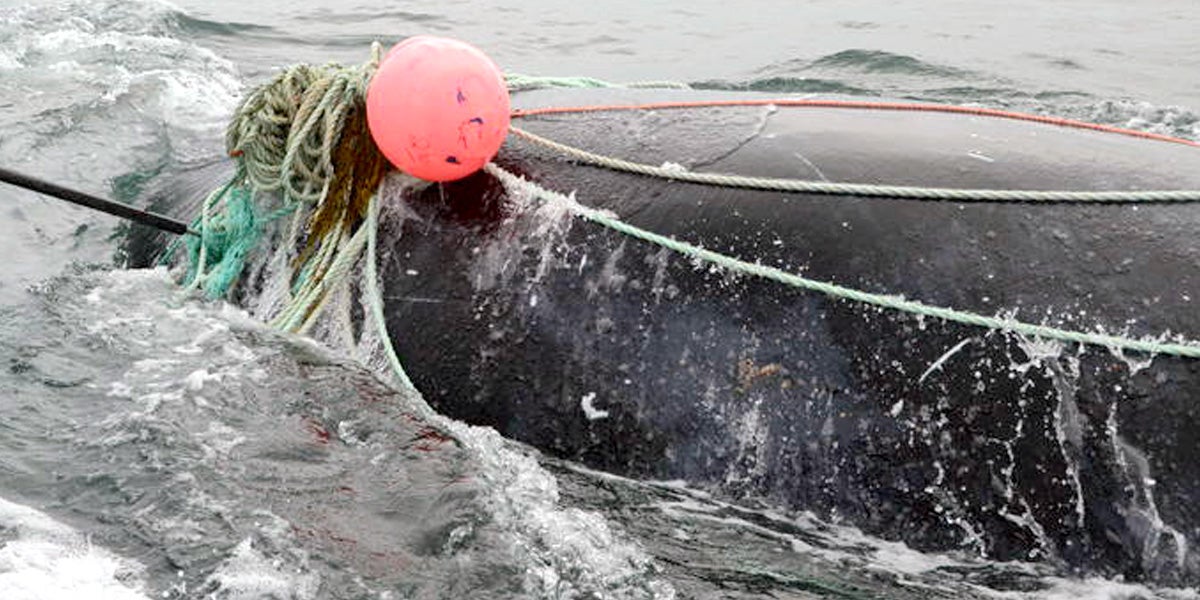 Two North Atlantic right whales were found dead off the Maine coast on Tuesday, while a third was rescued from entrapment by fishing gear off Cape Cod. 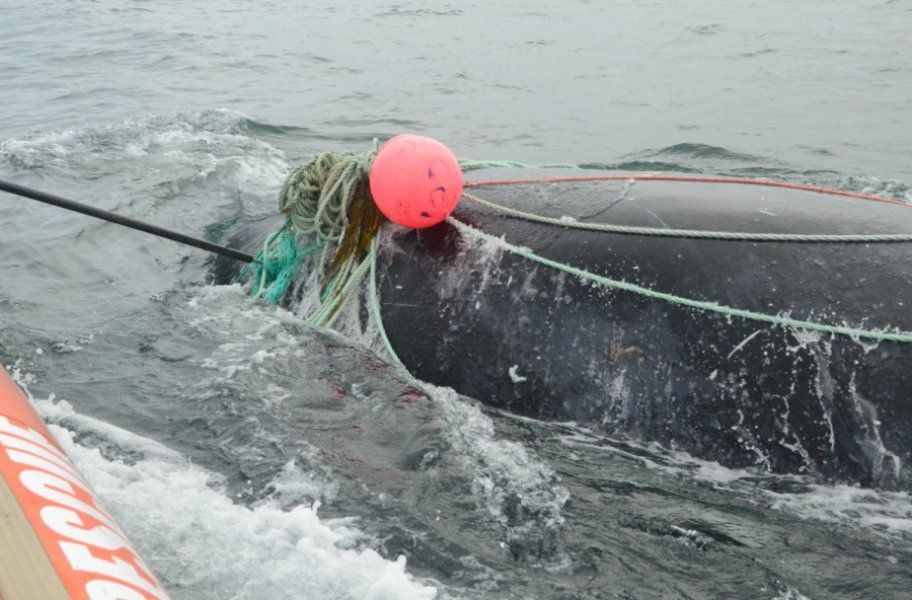 Ropes and bouys entangle a young, endangered right whale bear the U.S./Canada border in the Gulf of Maine.Campobello Whale Rescue

A study by the New England Aquarium in Boston, released earlier this month, revealed that the critically-endangered whales are threatened by a dramatic increase in lethal entanglements with fishing gear. Only 500 remain in the ocean.

The North Atlantic right whale is one of three right whale species in the world’s oceans, the other two being the Pacific right whale and Southern right whale. They are distinct species and do not interbreed. Like blue whales and humpbacks, right whales are baleen whales that get their food by filtering large quantities of water through plates of baleen, which act like a strainer. They can consume more than 2,600 pounds of tiny zooplankton and krill per day.

Right whales have led a hard life for the last 1,000 years. That’s when the earliest hunting of whales began, and they owe their name to the notion that they were the “right whale” to hunt. They tend to stay close to the coast and they are slow swimmers. When killed, they float on the surface. As early as the 1700s, the population of right whales became so decimated that they were no longer commercially significant.

The North Atlantic right whale flirted with extinction by the early 20th century, and whaling for this species became illegal in 1935. But almost 60 years later, there were just 295 whales and the population was well below a sustainable level. In the U.S., they were first listed as an endangered species in 1970, but recovery has been slow and uneven. The most recent data from NOAA Fisheries estimates the population at 465 individuals.

As far back as 1990, ship strikes and entanglement with fishing nets were responsible for one-third of right whale deaths. Now, fishing gear is the dominant cause of death for North Atlantic right whales. The New England Aquarium study, published in Frontiers in Marine Science, reveals that from 2010 to 2015, 85 percent of right whale fatalities were due to entanglements. Ship strikes have declined as a percentage of death since shipping lanes in the Bay of Fundy were moved in 2003 and the U.S. lowered ship speed limits in right whale habitats in 2008.

However, efforts to reduce kills from fishing gear have not been successful. Many whales become entangled multiple times, often able to free themselves only to get caught up once more. Young whales become trapped more often than adults. The study’s authors echoed a 2016 paper from NOAA Fisheries “that efforts made since 1997 to reduce right whale entanglement have not worked.” 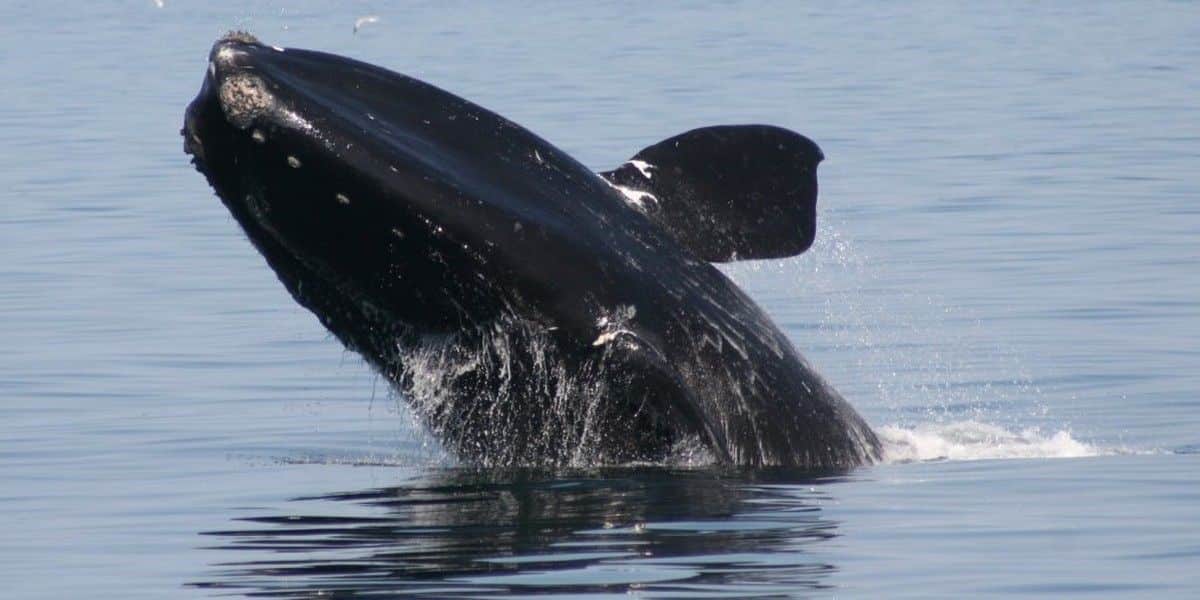 Off Provincetown, Massachusetts, last Thursday, rescuers removed 200 feet of fishing gear and buoys, freeing that one lucky right whale. Attached to one of the buoys was a U.S. fishing license. An investigation is under way.

One of the unlucky dead whales found floating near Boothbay Harbor was an 11-year old female, who was only at the very beginning of her reproductive years. She was well known to scientists, having been tracked and spotted 26 times since 2006. In her short life, her travels had taken her to the Florida waters, Cape Cod Bay, the mid-Atlantic and the Gulf of Maine. She died a long, painful death, with rope wrapped around her head, both flippers and in her mouth. 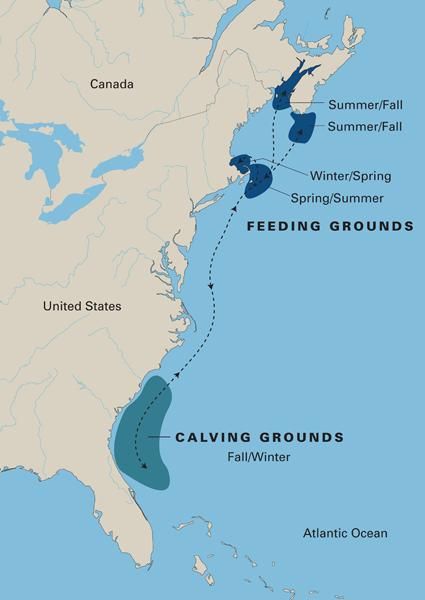 It is now about the time that most North Atlantic right whales head south for the winter. Following a spring and summer off Northern New England and the Canadian Maritime Provinces, they’ll head for the warmer waters near Georgia and Florida. There, females may give birth, but do so only once every three to five years.

On Sept. 15, President Obama created the first marine national monument in the Atlantic Ocean. The Northeast Canyons and Seamounts National Monument lies to the southeast of Cape Cod, covering some right whale habitat, but at only 4,913 square miles, it protects only a small triangle of a vast ocean.

The authors of the New England Aquarium study put it plainly: “In conclusion, right whales are not yet a conservation success story.”