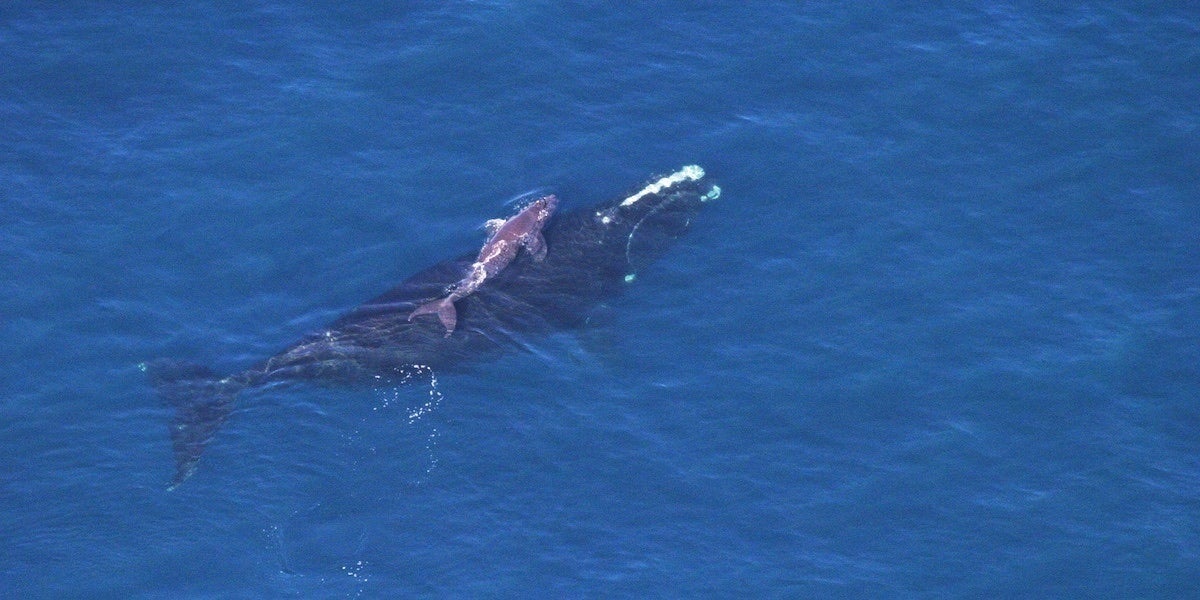 The
North Atlantic right whale is already one of the most endangered whales, with fewer than 450 of the iconic marine mammals left on the planet.

But the situation appears to be getting worse: Researchers tracking the
whales‘ usual calving grounds off Georgia and northern Florida have not seen a single calf yet this breeding season, which started in December and peaks in January and February.

To compare, an average of 17 calves a year were born from 1990 to 2014. Only five were born in 2017. It would be “unprecedented” if no calves are born are this year, as Charles “Stormy” Mayo, director of the Right Whale Ecology Program at the Center for Coastal Studies in Provincetown, Mass, told the New York Times.

He noted that it’s possible that the whales moved somewhere else to give birth, or calves might be found later in the season, which lasts through the end of March.

“I will not be surprised, though I will be excited, if we see a calf or two in Cape Cod Bay,” said Dr. Mayo, whose research team tracks the animals in the bay.

The species has been struggling since the 1970s when they were first declared endangered. Last year, 17 of them died, or about 4 percent of its total population.

And there’s another looming threat. In April, President Donald Trump signed an executive order aimed at expanding offshore oil drilling and exploration. Seismic airgun blasting, which is used to find oil and gas beneath the ocean floor, has been proposed within the same main range of North Atlantic right whales.

Scientists warn that seismic airgun blasting is so incredibly loud and powerful that it could adversely affect the whales and other marine life. The government’s own 2014 environmental review estimates that seismic airgun blasting in the Atlantic could injure as many as 138,000 marine mammals like dolphins and whales, while disturbing the vital activities of millions more.

Sen. Edward J. Markey (D-MA), who is leading a bipartisan group of New England Senators in
introducing legislation to bar offshore drilling along the New England coast, was alarmed by the daunting status of right whale.

“The endangered right whale is heading towards extinction,” he tweeted. “The only thing that would be more harmful for their chances of survival than @realDonaldTrump’s offshore drilling plan would be actually hunting them for their oil. #ProtectOurCoast”

The endangered right whale is heading towards extinction. The only thing that would be more harmful for their chances of survival than @realDonaldTrump's offshore drilling plan would be actually hunting them for their oil. #ProtectOurCoast https://t.co/3Q9noTT1d8