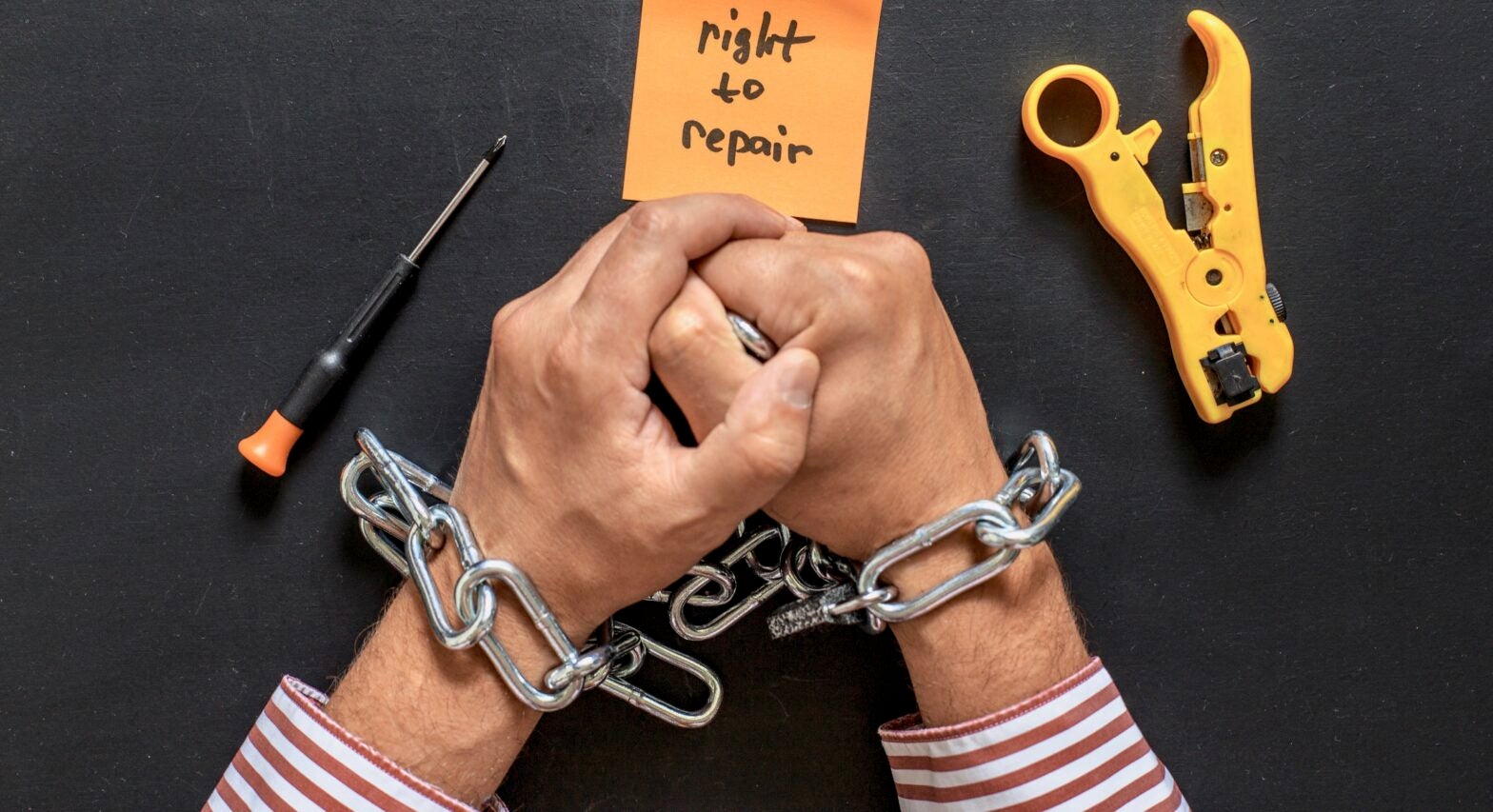 The workplace of the inventor's technique. The hands of the worker are bound by a chain as a symbol of the prohibition on repair. Andrey Bukreev / iStock / Getty Images Plus

When our smartphones, televisions or other gadgets stop working, it seems like the only choice we have is to get rid of it. This never-ending stream of electronic waste has created mountains of toxic trash that’s hazardous to people and the planet.

That’s why consumers and lawmakers in the U.S. and Europe are fighting back under the burgeoning “Right to Repair” movement that demands manufacturers make products that last longer and are easier to fix, BBC News reported.

This change can’t come soon enough. E-waste is the fastest-growing waste stream in the world. In 2016, some 44.7 million metric tonnes of e-waste were generated globally, according to the Global E-waste Monitor 2017 (pdf). As more and more products come along, experts forecast an increase of e-junk to 52.2 million metric tonnes by 2021.

In March, California Assembly member Susan Talamantes Eggman introduced the “California Right to Repair Act” that would require manufacturers to release diagnostic and repair instructions, and make equipment or service parts available to product owners and to independent repair shops.

The bill was introduced just a handful of months after Apple was accused of slowing down older iPhones—a move that led some users to spend hundreds of dollars on new phones rather than simply replace the battery. That’s not to mention that Apple makes their phones very difficult to crack open, making it hard to DIY a fix. (Apple apologized and offered a discount for battery replacement.)

Why Apple Deliberately Slowing Down iPhones Is Harming the Environment https://t.co/19KHx602UV @BusinessGreen @Ethical_Corp

“We should be working to reduce needless waste—repairing things that still have life—but companies use their power to make things harder to repair. Repair should be the easier, more affordable choice and it can be, but first we need to fix our laws,” said Emily Rusch, executive director of CALPIRG, in a press release in support of the California bill. “Our recent survey, Recharge Repair, showed a surge in interest in additional repair options after Apple announced battery issues. The Right to Repair Act would give people those options.”

Environmentalists say “Right to Repair” legislation will save resources and reduce carbon emissions from the manufacturing of new products. The New York Times pointed out that in Apple’s latest sustainability report (pdf), each new Apple device produced emits an average of 90 kilograms of CO2.

Libby Peake from the UK-based think tank Green Alliance told BBC News “that at last politicians are waking up to an issue that the public have recognized as a problem for a long time.”

Right to Repair laws make a lot of sense for our wallets and the environment, but manufacturers are opposed to the legislation.

Tech giants, including Apple and Microsoft, do not like users fixing their own devices because it could be a security risk to the user, according to the Verge. It’s also very likely that these companies want us to keep buying more stuff.