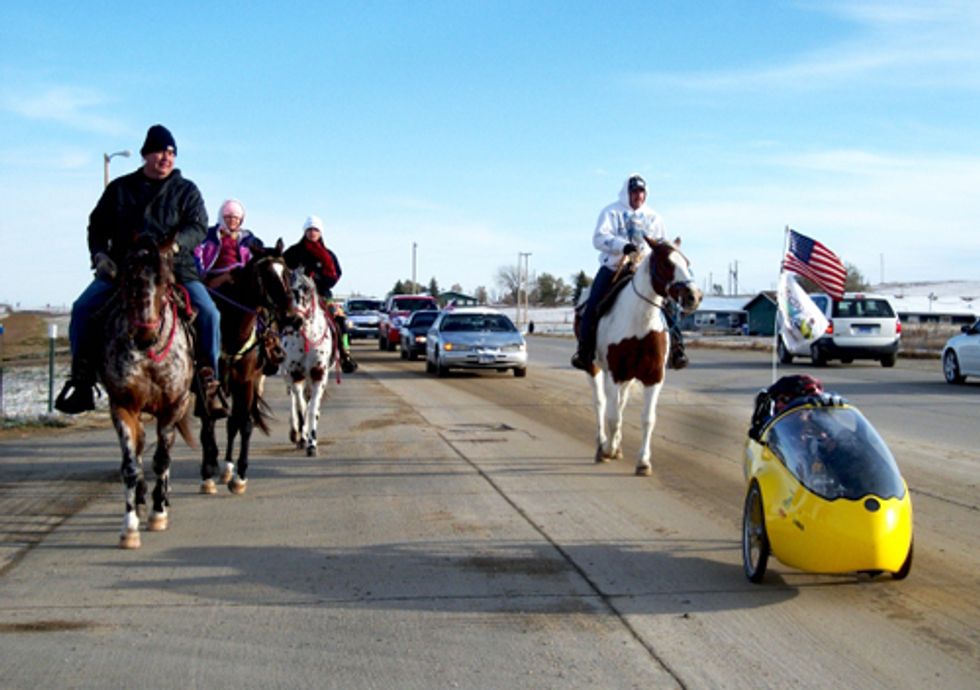 Reprinted with permission from Grist.org

Tom Weis, the “renewable rider,” biked the 2,150 miles of the U.S. portion of the proposed Keystone XL pipeline route over two months late this fall, from the U.S./Canada border to Port Arthur, Texas. He steered his “rocket trike” through many small towns along the way, raising awareness, talking to reporters, and recording scores of interviews with a wide variety of people. He’s just returned to his home in Colorado with a good sense of the prevailing opinions of the project in America’s rural West.

Q. Why didn’t you celebrate Obama’s delay of the Keystone XL pipeline back in the fall?

A. I saw nothing to celebrate. Delay doesn’t equal victory. It was disturbing to see environmental leaders, many of whom I consider friends, praising President Obama for his “leadership” and “courage” for what was in fact an act of political cowardice on his part. Kicking the Keystone XL can down the road until after the election was a transparent political ploy to appease his environmental base by throwing them a bone. Since when do we start giving presidents a pass on making tough decisions until after election day? I share Paul Hawken’s view that it is “dangerous” to allow a decision with such huge planetary ramifications to be delayed until political pressure no longer has any sway.

The pipeline fighters I met on the front lines of the Keystone XL Tour of Resistance certainly weren’t celebrating. It was like having the rug pulled out from under you. Just as the pressure was starting to build on the Obama campaign, all the air was let out of the room. This prompted me to write an op-ed for the Huffington Post, Now is the Time to Fight the Keystone Pipeline. Those with the most to lose—the farmers, ranchers, rural families, tribal communities, and fence-line communities living along the proposed pipeline route—will celebrate when this project is actually stopped.

Q. But isn’t TransCanada losing a ton of money from the delay? Doesn’t that doom the project?

A. Sure, they’re losing money, but that won’t stop them. When you have pockets as deep as TransCanada’s, you hire teams of people to create contingency plans for every possible scenario. But don’t just take it from me. Even as President Obama announced the delay, CNNMoney reported TransCanada’s CEO remained confident Keystone XL would ultimately be approved.

Q. What about this new directive from Congress for a 60-day consideration of the pipeline?

A. Aside from the crass political motivations behind it, I actually view the 60-day Keystone XL provision [requiring a presidential decision by Feb. 21] as an opportunity. The Republicans accomplished what the rest of us could not—They forced President Obama to take a stand. We’ll soon see if the president’s original rationale for a 12- to 18-month delay was truthful.

Subsequent statements by the White House and U.S. State Department certainly seem to point to Obama rejecting the pipeline and pinning the blame on Republicans for rushing the review process. But it would be foolish to underestimate the political influence of the oil lobby. Shortly after New Year's, American Petroleum Institute President Jack Gerard threatened political retribution if Obama does not deliver them Keystone XL.

Those are fightin’ words. But they also give the president a chance to begin driving the narrative of the 2012 election by differentiating himself from Big Oil and their old-world economic views. Little would do more to reinvigorate his presidency than saying “no” to Keystone XL and “yes” to a U.S.-led green industrial revolution and the millions of good-paying jobs it will create. Did you know the green economy has already generated 2.7 million jobs in the U.S., more than everyone employed in the entire fossil-fuel sector?

I’m not a Democrat, or a Republican, but it doesn’t take much imagination to see Obama turning the tables on the oil lobby and his Republican opponent for backing this un-American pipeline scheme. He can start by using his upcoming State of the Union address to spell out to the American people why this foreign energy project violates our national interest, and our values. The preponderance of hard evidence shows this export pipeline may destroy more jobs than it creates, will raise fuel prices, and won’t make America more secure. Keystone XL is a dangerous threat to Americans, and our economy, and is the exact wrong direction for our country.

Q. Can you share one peak experience from your trek?

A. I was totally blown away by the solidarity march and rally we had courtesy of the Lakota Nation. I have never felt so warmly embraced by a community in my life. Rolling into downtown Pine Ridge, S.D., on my rocket trike, I was greeted by dozens of Oglala Sioux tribal members who had taken over the streets. It was a beautiful sight to behold … grandmothers holding banners, a youth drum group singing honor songs, men waving flags, and camo-clad youth providing security. It was an incredibly powerful experience. The horseback solidarity rides with indigenous leaders in Montana and South Dakota were also unforgettable. The Native wisdom of these people fills me with hope.

Q. You taped a lot of interviews on the road. Have a favorite one to share?

A. There were so many profound interviews, it’s hard to pick a favorite, but I was deeply touched by the words of Goldman Environmental Prize winner Hilton Kelley, who spilled his heart out into a poem called “My Toxic Reality.”

Q. Can you generalize about the views on the pipeline of people you’ve met?

A. The more people hear about Keystone XL, the less they like it. Most people I met during the six-state ride knew very little about it, other than the jobs and energy security propaganda they had heard from TransCanada. What struck me the most was how quickly people would turn against it after hearing just a few facts.

Of course, the landowners I met who would be most directly impacted had an almost uniformly negative opinion of the pipeline. Many had been on the receiving end of TransCanada’s bullying tactics and were very angry at how they had been mistreated by this foreign corporation. “Disrespect” is a word I heard a lot.

I discerned no party-line affiliation whatsoever. Keystone XL is bad for America on so many levels, it transcends political party. There’s something in it for everyone to oppose. I met Tea Party activists working side-by-side with environmentalists. I saw powerful alliances of “cowboys and Indians” being formed. By assaulting so many core American values, TransCanada has succeeded in uniting people against the project. What started out as a fight against a pipeline has morphed into a struggle for the future direction of our country, and world.

Q. What happened when you reached your destination in Texas?

A. After 2,150 miles of pedaling, the ride ended with a press conference in the shadow of polluting smokestacks at a playground in Port Arthur, Texas. I was joined by local resident Hilton Kelley. I chose the West Side of Port Arthur because the air of the people living in this fence-line community would be further poisoned by emissions from refining toxic tar-sands oil. I wanted to draw attention to the plight of the babies and elderly living in this community who are already suffering enough.

Going forward, the clock is ticking on a 60-day window for President Obama to make a “national interest” determination on this foreign pipeline scheme. Every day between now and Feb. 21 is critical. The president needs to hear from voters that if he rejects Keystone XL, and rolls out a green energy plan to put America back to work leading a worldwide green industrial revolution, the American people will have his back. We can turn the Rust Belt into the “Green Belt” by building the solar panels, wind turbines, and electric cars needed to power the 21st century. It’s time for a green energy moon shot for America.

Erik Hoffner works for Orion magazine and is also a freelance photographer and writer whose recent investigative report for Yale Environment 360 on unsustainable logging in Sweden was picked up by National Geographic News Watch. See images from Sweden and links to those stories here.