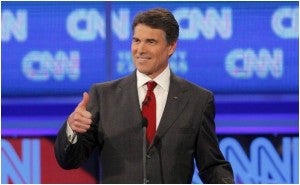 Texas Governor and Republican presidential hopeful Rick Perry unveiled his energy plan for America Oct. 14. The plan, if implemented, will poison our air and water with toxic pollutants like soot, smog, arsenic, cadmium, dioxin, lead and formaldehyde. It would also undercut safeguards from mercury, which is a neurotoxin and is known to harm developing fetuses.

“Rick Perry’s energy plan reads like a roadmap for making America’s kids sick,” said Sierra Club executive director Michael Brune. “Under this plan, we can expect to see much higher rates of asthma among children, and risk to pregnant women from mercury exposure. Republicans like Perry are putting polluters’ profits first and our kids’ health last. The Republican mantra should be ‘wheeze, baby, wheeze.”

Perry’s plan calls for scaling back basic U.S. Environmental Protection Agency (EPA) safeguards that protect our clean air and water. It would simultaneously expand development of dirty energy like coal, oil and natural gas, amounting to a one-two punch to Americans’ health.

“American families have enough to worry about,” Brune said. “They don’t need to spend more time taking their kids to the doctor or more money on hospital bills. The only people who stand to profit from this plan are overpaid oil, coal and natural gas CEOs.”

“Dismantling the EPA and assuming that states are properly watching over natural gas drilling is dangerous and puts the health of our families and communities at risk,” said Brune.

Perry’s plan would also undercut the expansion of jobs in industries like solar—the fastest-growing industry in the energy sector.

“There’s a solution to the current epidemic of pollution-related illness that will also create good, lasting local jobs, and secure America’s energy independence,” said Brune. “It’s clean energy. America’s clean energy industry is strong and thriving, even in this down economy. Rick Perry’s plan would stifle that growth and return our country to a dirty, antiquated energy system. Under his plan, we’ll see asthma rates among American kids soar, while countries like China surpass us in reaping the benefits from clean energy like solar and wind.”

In fact, America is predicted to become the world’s leader in solar energy by 2014, and in 2010, the U.S. was a net exporter of solar by $2 billion. Solar energy creates seven times more jobs than coal, nuclear and natural gas.