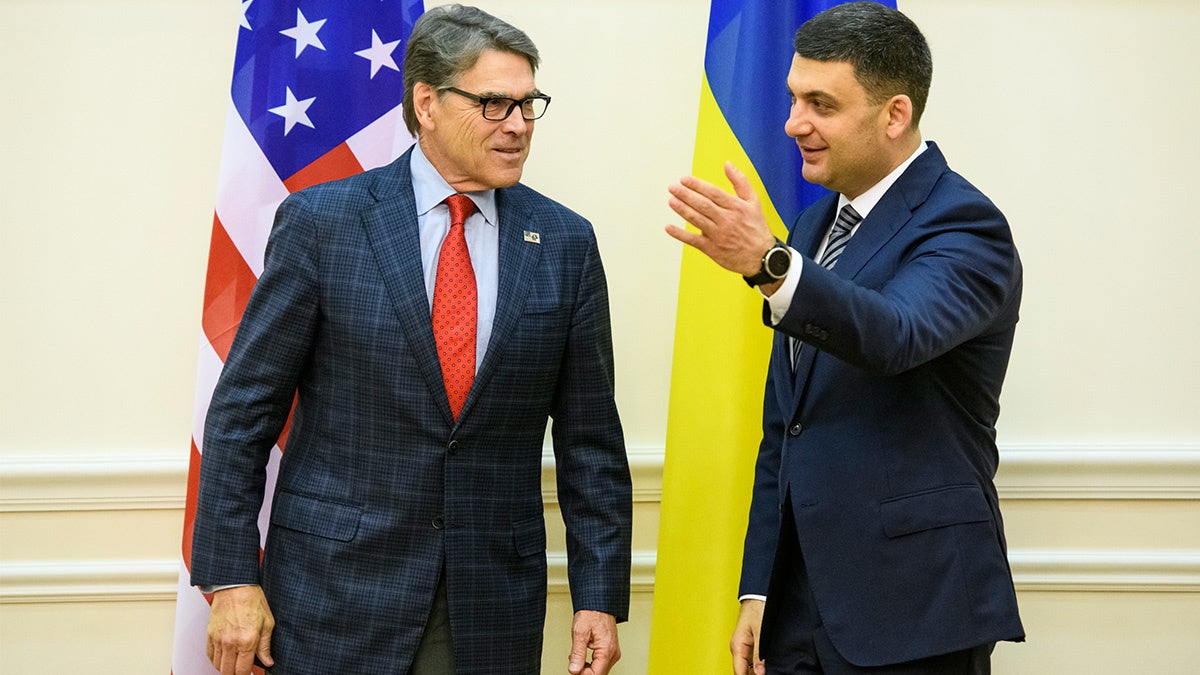 U.S. Energy Secretary Rick Perry during a meeting with Prime Minister of Ukraine Volodymyr Groysman in Kyiv, Ukraine, on May 21. Maxym Marusenko / NurPhoto via Getty Images

Energy Secretary Rick Perry, who has aggressively championed fossil fuels and expressed skepticism that the climate crisis is man-made, will step down from his post by the end of the year, The New York Times reported.

Perry is one of the few people in the Trump administration to remain despite unprecedented turnover, Twitter-storms and scandals. He has been a steadfast ally of the fossil fuel industry and appears to have avoided the president’s ire. However, his ability to steer clear of scandal may have come to an end in the wake of the recent revelations of Trump’s attempt to strong-arm the Ukrainian president into digging into Joe Biden’s son, Hunter.

That inquiry has called into question Perry’s trip to Ukraine President’s Volodymyr Zelensky’s inauguration in May where he promoted Ukraine’s oil and natural gas exports, according to The New York Times. However, POLITICO reported that two people familiar with Perry’s plans said he had been planning to leave for several months, well before the recent scandal surfaced.

So far, no evidence has emerged that Perry pressured Zelensky to investigate the Biden family, according to The Washington Post.

The Department of Energy would not confirm that Perry is planning to depart.

“While the Beltway media has breathlessly reported on rumors of Secretary Perry’s departure for months, he is still the Secretary of Energy and a proud member of President Trump’s Cabinet,” Energy Department spokeswoman Shaylyn Hynes told CNN. “One day the media will be right. Today is not that day.”

Perry’s time at the Department of Energy is notable for his resistance to renewable energy. He has fiercely promoted oil and gas exploration and touted coal and nuclear energy as the future of America’s energy sector, even though he has tried and failed to prop up coal-fired and nuclear power plants. Meanwhile, he has also approved plans to reduce funding for wind, solar and other renewable energy sources, according to The New York Times.

Just last month the Department of Energy put the kibosh on an Obama-era requirement that would have phased out incandescent and halogen light bulbs and replaced them with more efficient LED bulbs that would have kept millions of tons of CO2 out of the atmosphere.

Perry’s resignation will seemingly end his long career in politics.

“I really think this might be the end of the road for him in terms of holding political positions,” said James W. Riddlesperger, a professor of political science at Texas Christian University who has followed Mr. Perry’s career since he ran for and won state agriculture commissioner in the 1990s, as The New York Times reported. Two people close to the energy secretary told the Times they expect him to go into the private sector.

Michael Greenstone, who directs the University of Chicago’s Energy Policy Institute, wrote in an email to The Washington Post that Perry would leave government with a mixed record.

“By all accounts, Secretary Perry stands out for running the DOE forthrightly and without seeking personal gain. But at the same time, his DOE has pursued policies, for example his efforts to increase coal usage on the grid, that seem to willfully ignore science and economics,” Greenstone wrote. “Ultimately, how one judges his tenure depends on how you add these factors up and whether you think they reflect his private views or the president’s positions.”