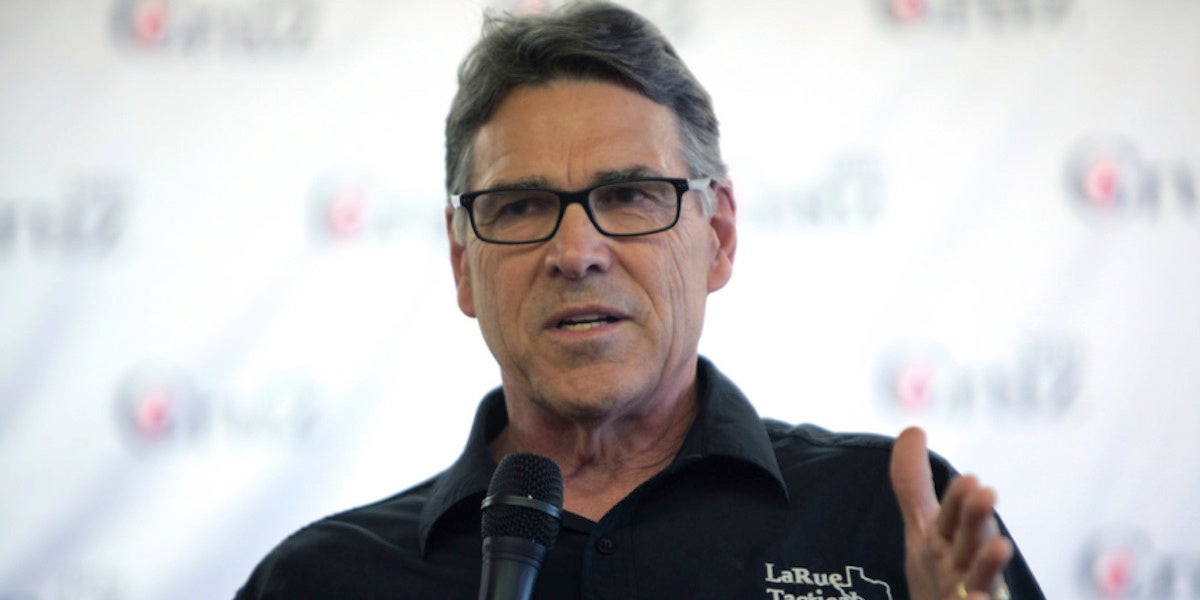 Protestors showed up to the National Petroleum Council’s meeting in Washington, DC on Monday to
call out Secs. Rick Perry and Ryan Zinke for their controversial stances on climate change.

After an activist expressed, “climate change is killing people,” the Secretary of Energy
remarked in the conference room full of oil industry representatives and executives that fossil fuels save lives.

“It upsets me when some guy stands up and says, ‘What are you going to do, you’re killing people,'” Perry said to applause. “No sir. You want to kill people, you take energy away from them and you see how those north African countries will be treated.”

Some of the fossil fuel industry’s biggest names, including Exxon Mobil and Shell, were present at the annual meeting.

Great event w/ @SecretaryZinke & others today at the National Petroleum Council mtg Together we will achieve #AmericanEnergyIndependence pic.twitter.com/NZ0TFKCbgn

According to Bloomberg, the protestors were removed from the hotel conference room after their remarks.

The
Trump administration’s environmental PR problem has been under heavy scrutiny in the wake of devastating Atlantic hurricanes that destroyed parts of Texas, Florida and the Caribbean.

Earlier this month, Perry dismissed the link between climate change and its effect on extreme weather after Hurricane Harvey wrecked Houston.

“We can line up scientists on both sides of this,” he told
CBS News, but “this is not the time to be having this conversation.”

Rather, Perry said, the focus should be on helping
Hurricane Harvey victims.

“Everyone wants to run to the climate change debate, but that is very secondary at this particular time,” he said.

Perry is one of the featured speakers at Tuesday’s star event, the Symposium & Demonstration Fair on Capitol Hill.

But environmental organizations
criticized the weeklong event as an “ultimate corporate greenwashing experience.”

In a
letter addressed to members of Congress, the groups called out some of the sponsors of National Clean Energy Week as “some of the dirtiest actors in the energy industry,” such as the American Gas Association, American Petroleum Institute, Biomass Power Association, Energy Recovery Institute (garbage incineration), and the Nuclear Energy Institute.

The letter was signed by organizations including
350.org, Friends of the Earth and Oil Change International.

“The climate crisis is real, and these clean energy claims are phony,” said Dr. Mary Booth, director of the
Partnership for Policy Integrity, a nonprofit that applies science to inform clean energy policy. “We’re writing Congress to remind it that clean energy doesn’t come out of a smokestack. Congress must keep its hands off Americans’ wallets when these super-polluters come asking for clean energy subsidies.”