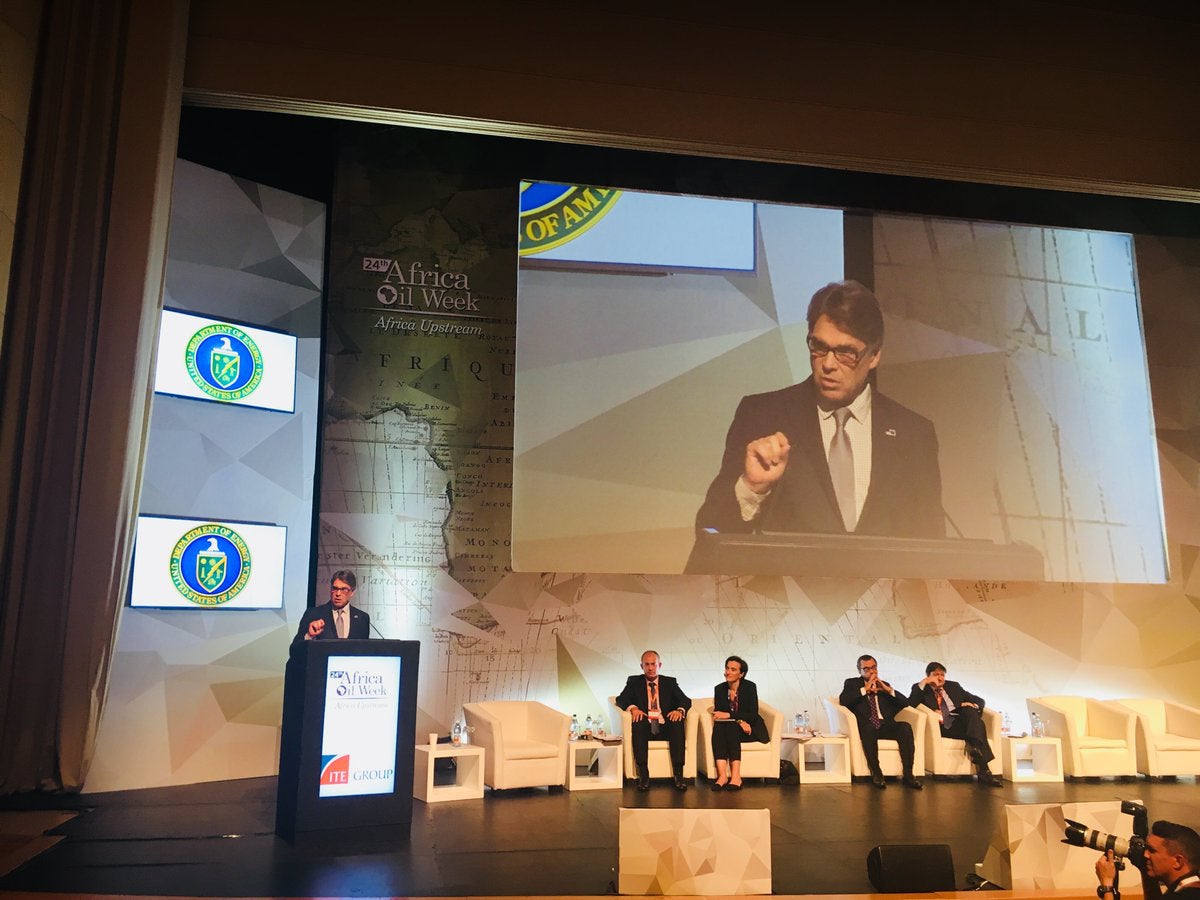 Last week, one of the most senior officials in the Trump administration, Energy Sec. Rick Perry travelled to South Africa to represent the U.S. at the Africa Oil Week.

During his time at the Oil Week conference in the coastal city of Cape Town, Perry delivered the keynote address on global energy policy, telling his audience that the Trump Administration was keen on “strengthening our African energy partnerships.”

It soon became very clear what he actually meant.

He quickly criticized the Obama Administration for “discriminating” against the nuclear and coal industries.

Not surprisingly, given the agenda of the Trump Administration and given that Perry was governor of oil rich Texas, Perry said they were keen for those partnerships to include fossil fuels.

Perry said he was a “big fan of fossil fuels” and it was time to break the global “culture of shame” around their use.

He was also keen on the formation of “a global clean coal alliance” including traditional coal powers such as the U.S., India, Australia and South Africa.

Commentators see Perry’s speech as a clear indication that the Trump Administration is taking its pro-fossil fuel agenda to Africa.

One press outlet reported Perry as saying, “If you admit you support fossil fuels, it’s like saying you’ve made some huge social error. But it’s in fossil fuels that you will see real growth.”

He continued: “That’s my message to Africa. America is truly your friend and your partner. And we’re here to help Africa use fossil fuels and use them cleanly with the world’s newest and best technology.”

“My showing up here is about U.S. support for Africa,” he said. “We will invest in African energy projects, but it’s also time to let technology be your friend. We will help this continent make more power, and we will do it cleanly.”

But strip away the greenwashing and there is nothing clean about what Perry is advocating. There is no such thing as clean coal: it is a misnomer. Parry’s strategy is basically: drill Africa drill; frack, Africa, frack and mine for coal, Africa, mine for coal.

As one blogger for Platts noted, Perry “urged African producers to emulate the U.S. in its shale oil and gas revolution.”

The Daily Maverick added, “His fondness for fossil fuels was one of the few things he was firm on during his press conference on the first floor of the Westin hotel in Cape Town on Tuesday. That, and that the benefits of fracking outweigh environmental concerns.”

In promoting fossil fuels, Perry is persisting in the neo-Colonial attitude with which America has treated Africa for generations: Western oil companies should be able to exploit Africa’s fossil fuel reserves, no matter what cost. He also forgets that Africa is one of the regions that has the most to lose from climate change, too.

You only have to ask the people of the Niger Delta, who have suffered sixty years of repression, violence and pollution due to oil, to understand how oil rarely benefits local indigenous communities. As one Niger Delta person once said, as he surveyed his polluted cropland: “What has the oilman ever done for us?”