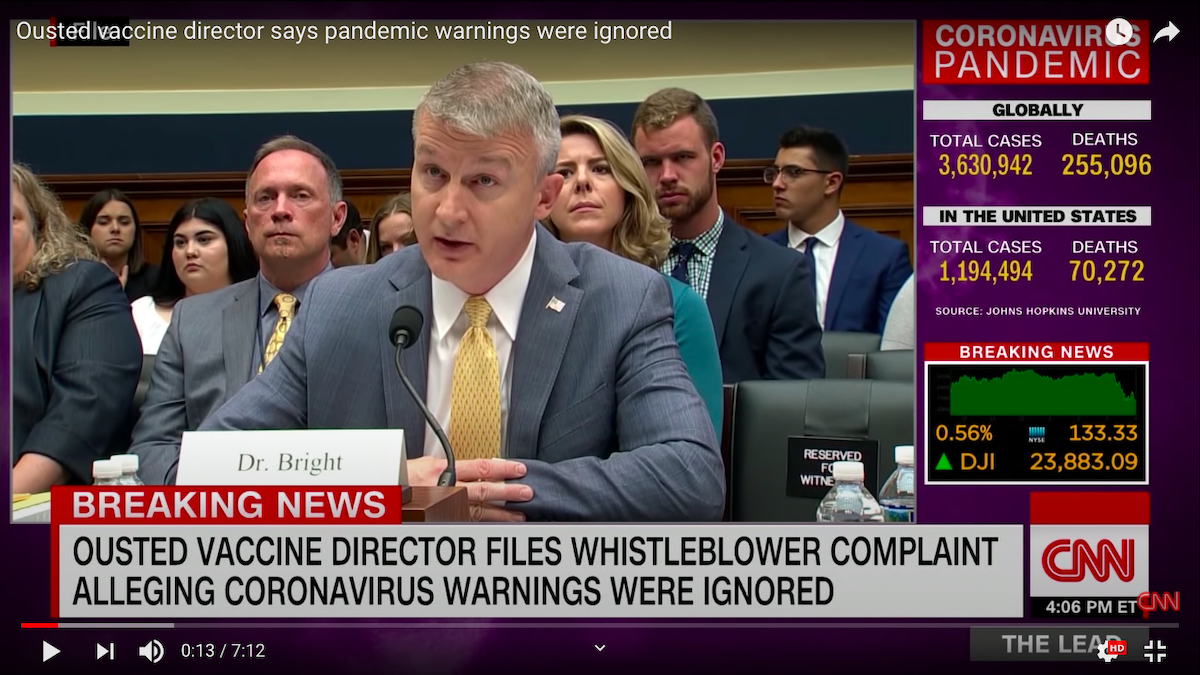 A federal scientist filed a formal whistleblower complaint Tuesday, weeks after being reassigned from his position at the Health and Human Services Department following a clash with Trump administration officials over untested Covid-19 treatments that the president was promoting.

Dr. Rick Bright, an immunology expert and until last month the director of the Biomedical Advanced Research and Development Authority (BARDA), said in addition to retaliation for objecting to President Donald Trump’s public insistence that hydroxychloroquine was effective at treating Covid-19, he faced sustained pressure from HHS officials since the beginning of the Trump administration to steer millions of dollars in contracts to the client of lobbyist John Clerici.

Clerici has a “longstanding connection” to Dr. Robert Kadlec, assistant secretary for preparedness and response at HHS, according to the complaint.

Multiple times beginning in 2017, when Trump took office, Bright was pressured to extend a government contract to Aeolus Pharmaceuticals, a client of Clerici’s. In addition to being Clerici’s client, Aeolus’s CEO was a friend of Jared Kushner, Trump’s son-in-law and senior advisor.

Bright refused to extend the contract, leading to discord between him and his superiors at the department. The tension steadily grew as Kadlec and other officials urged Bright to transfer million from BARDA to the Strategic National Stockpile in 2018 to purchase a drug made by manufacturer Alvogen, another of Clerici’s clients, among other disagreements.

According to the complaint, “Dr. Kadlec’s frustration with and animus towards Dr. Bright reached its breaking point when, after the emergence of Covid-19, Dr. Bright resisted efforts to fall into line with the administration’s directive to promote the broad use of chloroquine and hydroxychloroquine and to award lucrative contracts for these and other drugs even though they lacked scientific merit and had not received prior scientific vetting.”

Bright also wrote in the 89-page complaint that he encountered pushback in January when he called on HHS to begin developing resources in preparation for treatment and vaccine research as the Covid-19 pandemic reached the United States.

“It was clear to Dr. Bright almost immediately that the virus was highly contagious, spreading rapidly, and could have a high mortality rate,” the complaint reads. “Dr. Bright and his staff recognized the urgent need to obtain genetic sequencing information about the virus and to acquire viruses and clinical specimens from people infected with the virus to share with laboratories and companies… Dr. Bright initially encountered indifference which then developed into hostility from HHS leadership, including Secretary Azar, as Dr. Bright and his staff raised concerns about the virus and the urgent need to act.”

The department leadership grew increasingly hostile toward Bright after he communicated with members of Congress, the press, and some White House officials—including trade advisor Peter Navarro—about the need to act urgently to confront the pandemic.

As CNN reports, Bright is now scheduled to testify to Congress as early as next week on the charges included in his complaint:

Dr. Rick Bright, the ousted director of the office involved in developing a coronavirus vaccine who formally filed an extensive whistleblower complaint, is scheduled to testify on Capitol Hill next week, CNN’s @JDiamond1 reports. https://t.co/pSd4kyEHWf pic.twitter.com/ZvfCWOCe8G

Bright filed the whistleblower complaint with the Office of Special Counsel about two weeks after being reassigned to the National Institutes of Health. According to the complaint, after removing Bright from his post at BARDA, HHS officials “unleashed a baseless smear campaign against him, leveling demonstrably false allegations about his performance in an attempt to justify what was clearly a retaliatory demotion.”

The complaint calls for a reversal of Bright’s reassignment as well as a full investigation into his charges of cronyism at the department.