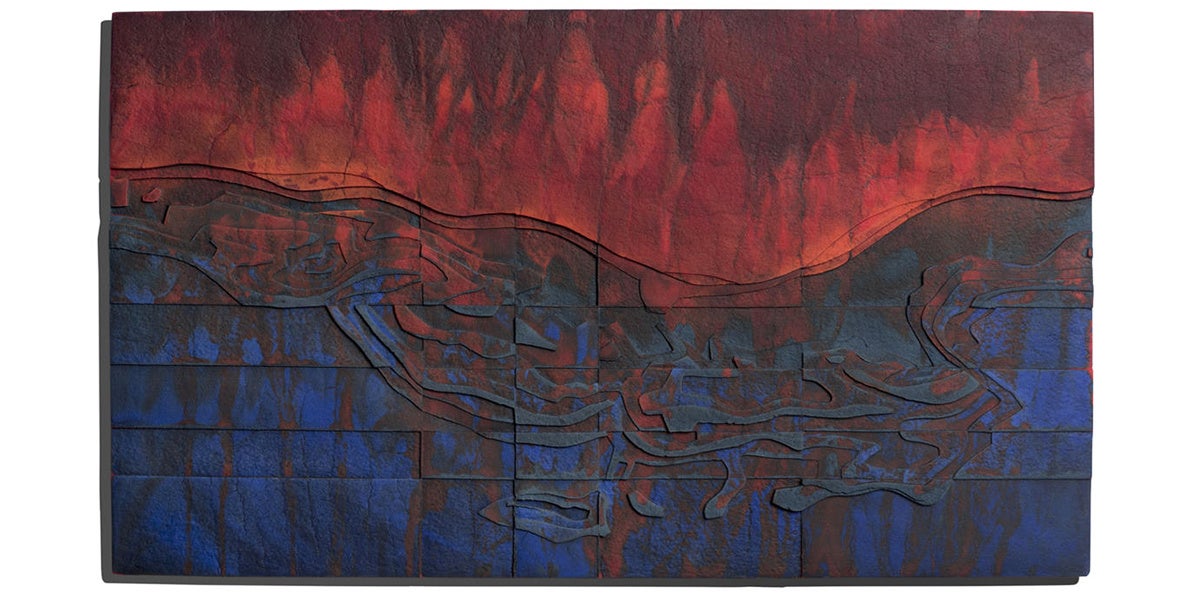 "On the Edge." Jessie Moore

Last summer, when wildfires burned out of control in Montana and other western states, Richard M. Parrish responded the best way he knows how: by creating artwork to document the devastation. Parrish, an internationally acclaimed glass artist, ascended over the parched landscape near his studio in Bozeman, Montana, in a small propeller plane. He then used these aerial observations to create a series of fused-glass works based on topographical maps—three of which are currently on view in The Tipping Point: Artists Address Climate Change, a group exhibition at the Rockland Center for the Arts in West Nyack, New York.

In one Parrish piece, On the Edge, the contours of the land appear in bas-relief against a background that appears to be ablaze. “It speaks to the idea that we are on the edge of a precipice regarding climate change,” said Parrish in an interview from Australia, where he is teaching a series of workshops on his kiln-formed glass techniques. “It conjures up images of the severe fires that most recently destroyed thousands of acres, hundreds of homes and businesses, and the livelihoods of unknowable numbers of people. The smoke and ash in the air where I live was horrible.”

Another artwork, Slide, with its earthy palette and sense of vertical movement, refers to the mudslides that often occur after wildfires. A third piece, Red Line, depicts from above the movement of rivers and eroding land features while alluding to the “line we likely have crossed, where we cannot reverse the damage of climate change,” Parrish said. 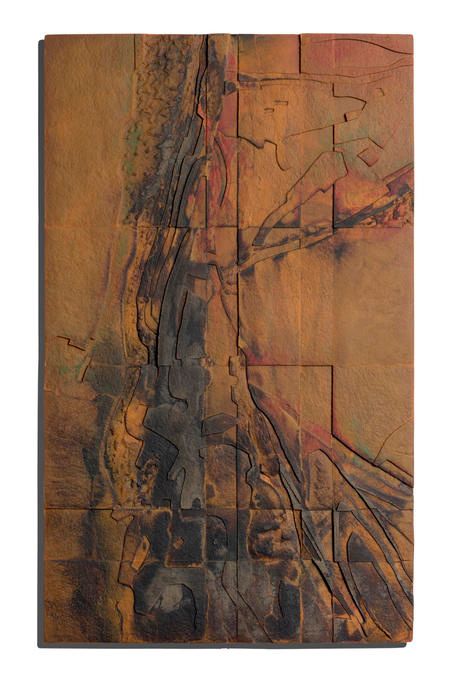 Barbara Galazzo, the co-curator of “The Tipping Point,” chose Parrish’s work for the show because it is as visually arresting as it is topical and timely. “I have followed his mapping series for years and think it is brilliant and relevant,” she said. “While you can physically feel climate change in temperature and in the number of hurricanes, droughts, and severe snowstorms, you can only see physical changes in the earth from above.”

Parrish’s unique fused-glass technique combines the three-dimensionality of sculpture with the painterly qualities of a work on canvas. It is also especially well suited to his subject matter. “By layering the colors on glass and then grinding away to reveal all the layers,” Galazzo noted, “it begins to resemble an X-ray of the earth while showing a topography of the land.”

The artist attributes his interest in environmental themes to his childhood on a farm in eastern Idaho. “It was my first connection to the land and landscape of the West, and I still draw on that,” he said, “from the colors and textures to the spatial qualities of the sky and horizon. We were near Yellowstone National Park, the Grand Tetons, Craters of the Moon and the Sawtooths—all amazing and powerful places.” 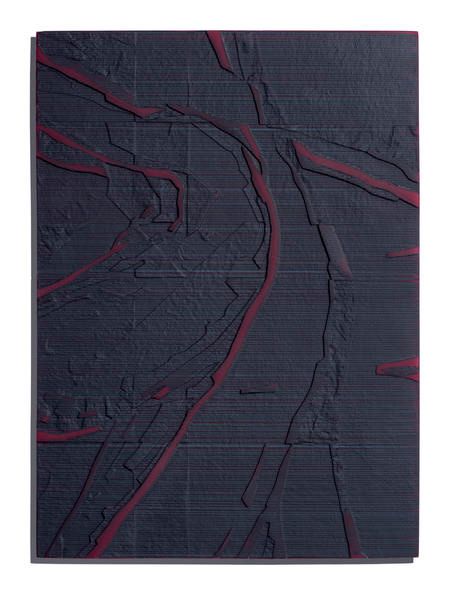 Trained as an architect, Parrish taught architecture and design at the University of Michigan and Montana State University. He established a glasswork kiln in Bozeman in the early 1990s and began to experiment there with his original fused glass techniques. Since 2001 he has been creating glass art full time and exhibiting and teaching around the world. “His work functions as a continuation of the rich American landscape tradition,” said Kirsty Buchanan, curator of collections and exhibitions at the Rockwell Museum, the Smithsonian affiliate in Corning, New York, which in 2016 hosted “Aerial Perspectives of the American Landscape,” a solo show of Parrish’s mapping pieces.

Several were bird’s-eye views of the patterns created by center-pivot irrigation systems. “Something I think about a lot is the Jeffersonian grid over most of the United States west of the Mississippi,” Parrish said. “To me it is the imposition of human will over the land and the ‘natural’ environment. I’m aesthetically interested in the way drainages, topography, and geology interact with and interrupt the geometric impositions.”

In addition to the pieces in “The Tipping Point,” Parrish’s artwork will be on view this spring when “Aerial Perspectives” travels to Bullseye Projects in Portland, Oregon (May 2–June 16). He is also helping to organize a group exhibit opening in May at the Pilchuck Glass School in Seattle.

An energetic proponent of the art of glass, Parrish enthuses about its artistic qualities. “Beyond the obvious—light, color, transparency, opacity, and reflection—I’m attracted to the myriad ways it can be transformed through heat, cutting, grinding, polishing, and breaking to create art,” he explained. But even more powerful is its ability to bring clarity to its subject matter. “I hope that my work can bring attention to the beauty—sometimes the result of devastating events—of the landscape environment.”

The Tipping Point: Artists Address Climate Change is on display at the Rockland Center for the Arts in West Nyack, New York, through May 25.