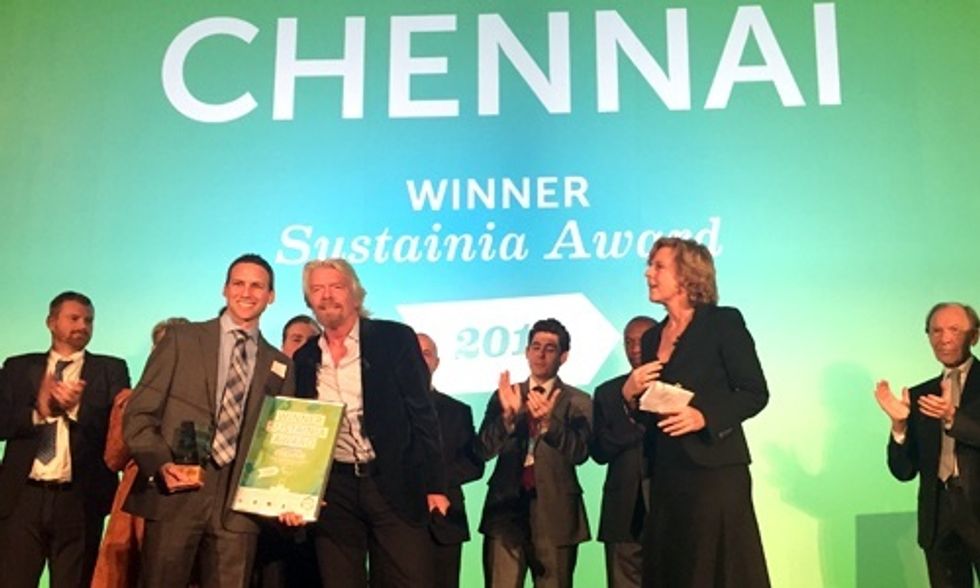 Effective and inspirational, the redesign of Indian city Chennai wins the 2015 Sustainia Award, chaired by Arnold Schwarzenegger, for its solution to the city’s mounting air pollution and traffic casualties. The city receives the award, while experiencing incessant rainfalls, overflowing rivers and lakes are causing thousands to flee the city, stressing the importance of sustainable solutions and climate adaptation.

Richard Branson presented the Sustainia Award 2015 to the Corporation of Chennai on Dec. 6 in Paris at a COP21 side event. Photo credit: Stefanie Spear

With more than 10,000 traffic crashes reported in Chennai every year—one of the highest rates of road deaths in India—and outdoor pollution as one of the region’s top health risks, this year’s Sustainia Award Winner addresses climate, transportation and health challenges in one go.

In 2012, the City of Chennai, along with the Institute for Transportation and Development Policy, implemented sweeping changes to give the city’s streets back to the people. This policy solution requires that at least 60 percent of the city’s transport budget to be allocated to constructing and maintaining infrastructure for non-motorized transit, including expanded footpaths, safe pedestrian crossings, protected cycle tracks, conveniently placed bus stops and clearly designated on-street parking.

So far, Chennai has created wide and continuous footpaths on 26 streets, and work on the next 60 streets is underway. Amazingly, there have been no new cases of any road crash fatalities reported from the streets that have undergone the redesign. The city aims to have safe and continuous footpaths on at least 80 percent of its streets by 2018, and as the expansion process continues, the city is serving as a model for other Indian cities, such as Trichy and Madurai, looking to make similar improvements.

The Chennai solution addresses major challenges linked to rapid urbanization in countries across the globe. In 1990, less than 40 percent of the global population lived in a city. In 2050, the expected number will increase to 70 percent. The World Health Organization warns that urban outdoor air pollution is responsible for 1.3 million premature deaths worldwide per year and by 2050, according to the OECD, air pollution is projected to become the biggest environmental cause of mortality worldwide.

Ted Turner was awarded the Lifetime Achievement Award at the Sustainia Award Ceremony on Dec. 6 in Paris at a COP21 side event. Photo credit: Stefanie Spear

From Chennai to Paris

While our spotlight is on Chennai, another city grabbing the world’s attention this week is Paris. Together with nine other leading innovations from nine different countries, the Indian city solution presented their project on stage at the annual Sustainia Award Ceremony, an event celebrating state-of-the-art innovations across 10 sectors such as food, fashion, transportation and buildings in an effort to bridge the gap between the political negotiations and the innovations on the ground.

The award ceremony was held in Paris on Dec. 5 during the UN climate change negotiations, COP21, to send a signal to global leaders that national level policies must be supported by concrete solutions and local action. Chennai’s project proves that cities have the power to become healthier, safer and more sustainable places, and that committed local leadership can show national authorities that change is not only possible, it’s necessary for a prosperous future.

Sustainia Award is an annual international award given to a solution, technology or project with a significant potential to help build a more sustainable future. Through a worldwide submissions campaign, the partners behind Sustainia Award each year create a list of 100 readily available innovations to highlight that a sustainable transition is possible and already happening.