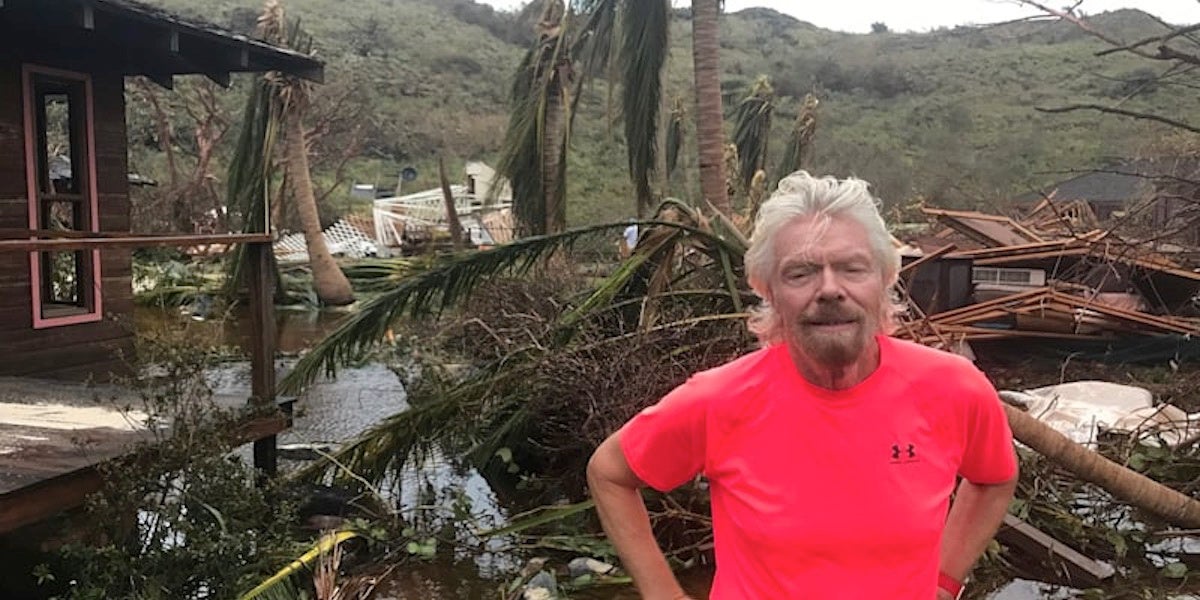 Virgin Group founder and longtime environmentalist
Richard Branson, who faced two damaging hurricanes in a row from his home in the British Virgin Islands, called out President Donald Trump‘s refusal to accept the science of climate change.

“Look, you can never be 100 percent sure about links,” the British billionaire said Tuesday on CNN’s “New Day” when asked about the correlation between global warming and the recent string of major hurricanes to hit the Carribean and the United States.

Trump, who famously thinks global warming is a hoax, dismisses the link between climate change and extreme weather events. After Hurricanes Harvey and Irma wrecked Texas and Florida, the president told reporters last week, “We’ve had bigger storms than this.”

Trump’s comment seemingly contradicted a tweet that he posted earlier that stated, “Hurricane Irma is of epic proportion, perhaps bigger than we have ever seen,” as well as another tweet, “Hurricane looks like largest ever recorded in the Atlantic!”

Branson was shaken after having to ride out Hurricane Irma in his wine cellar in Necker, his private island in the British Virgin Islands.

“I’ve never experienced anything quite like Hurricane Irma,” he said in an Instagram video posted Tuesday. “It literally devastated the British Virgin Islands. The head of the Royal Marines … said he’s been to war zones and has never seen anything like it. There’s not a tree left standing. There’s very few houses left standing.”

Branson pointed out during his CNN interview that the cost of rebuilding the British Virgin Islands and Houston will cost billions of dollars.

But, he noted, “If all that money could be invested in clean energy, in powering the world by the sun and by the wind, where we won’t have to suffer these awful events in the future, how much better than having to patch up people’s houses after they’ve been destroyed?”

Putting his money where his mouth is, the philanthropist said he has met with government representatives from Britain and the U.S. to set up a green fund to rebuild the hurricane-wrecked Caribbean, the Thomson Reuters Foundation reported.

“As part of that fund we want to make sure that the Caribbean moves from dirty energy to clean energy,” Branson said.